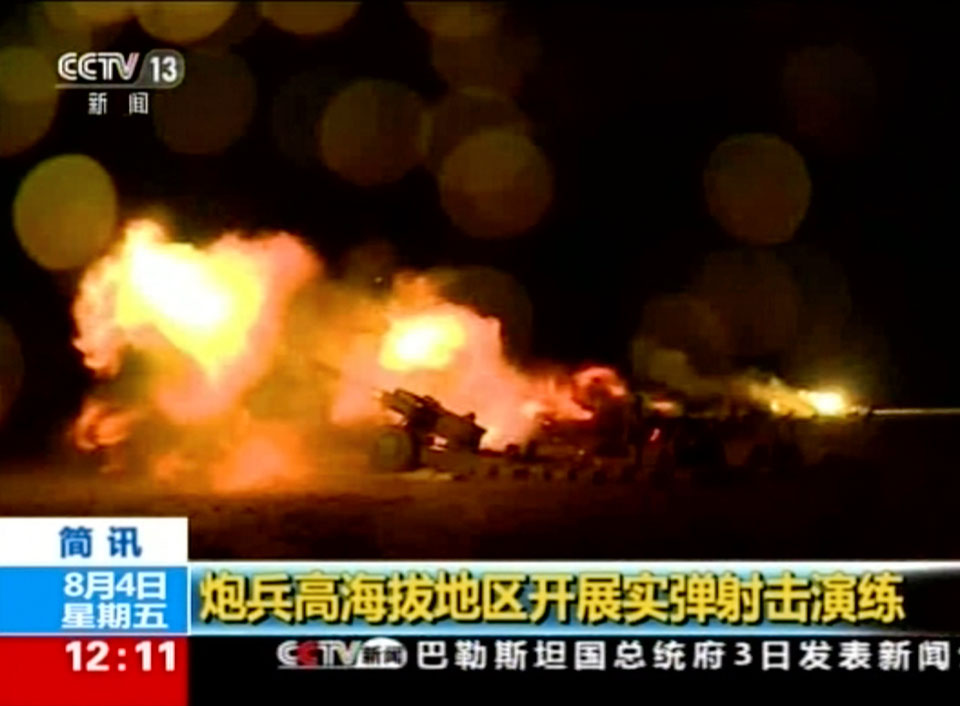 In this image taken from a recent video footage run by China's CCTV on Friday, Aug 4, 2017 via AP Video, artillery guns fire during a live-fire drill by the Chinese army in China's Tibet Autonomous Region that border India. Beijing is intensifying its warnings to Indian troops to get out of a contested region high in the Himalayas where China, India and Bhutan meet, saying China has been restrained but "restraint has its limits." (CCTV)

BEIJING, Aug 4: Beijing is intensifying its warnings to Indian troops to get out of a contested region high in the Himalayas where China, India and Bhutan meet, saying China's "restraint has its limits" and publicizing live-fire drills in Tibet.

Indian troops entered the area in the Doklam Plateau in June after New Delhi's ally Bhutan complained a Chinese military construction party was building a road inside Bhutan's territory.

Beijing says Doklam is located in Tibet and that the border dispute between China and Bhutan has nothing to do with India. It has demanded that Indian troops withdraw before any talks.

On Friday, China Central Television broadcast video it said showed an army unit in an unidentified part of Tibet carrying out live-fire firing exercises in the past few days.

A commander sitting in a vehicle shouted "3, 2, 1, fire!" into two telephones and a missile was launched into the sky. Troops were shown loading and firing other artillery, some of which landed in fiery explosions.

The report that was also carried in other state media didn't mention the dispute with India, and said that the unit has already been training for three months.

It appeared to be an attempt to increase pressure on India, however, along with strongly worded statements this week from China's foreign and defense ministries, as well as in state media.

"China has made it clear that there is no room for negotiation and the only solution is the unconditional and immediate withdrawal of Indian troops for the region," said a commentary Friday by the official Xinhua News Agency.

"If China backs down now, India may be emboldened to make more trouble in the future," it added.

Chinese Defense Ministry spokesman Ren Guoqiang said Thursday that while Chinese armed forces had shown "utmost goodwill" in the face of the Indian troops and a "high level of restraint ... restraint has its limits."

"No country should underestimate the Chinese forces' confidence and capability to safeguard peace and their resolve and willpower to defend national sovereignty, security and development interests," Ren said in a statement.

China and Bhutan have been holding talks over their border dispute since the 1980s and Bhutan feared the road construction would affect the process of drawing their boundary. India said its troops were attempting to urge the Chinese forces not to change the status quo and that any construction would have "serious security implications for India."

In New Delhi, External Affairs Minister Sushma Swaraj told Parliament on Thursday that India was concerned about China's actions affecting the tri-junction boundary point between Bhutan, China and India as well as the India-China border.

She said India would "keep engaging with China to resolve the dispute."

"War is not a solution to anything," Swaraj said. "Patience, control on comments and diplomacy can resolve problems."

Experts in India say that by building the road, China may be able to gain access to a narrow strip of Indian land known as the Siliguri Corridor or Chicken's Neck. If China was able to block the corridor, it would isolate India's northeast from the rest of the country.

China's Foreign Ministry issued a document Wednesday setting out what it called "the facts" about Indian troops "trespassing" into Chinese territory, calling on India to immediately and unconditionally withdraw and saying Beijing would work with Bhutan to resolve the boundary issue.

The document says that as of the end of July, more than 40 Indian border troops remained, down from when more than 270 troops with weapons and two bulldozers advanced more than 100 meters (yards) into Chinese territory on June 16.

In editorials this week, the ruling Communist Party's People's Daily said Indian officials and media had "concocted all kinds of groundless excuses" for the incursion.