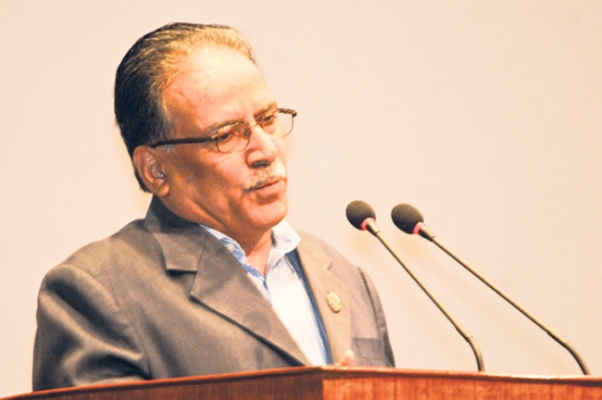 This act turned out to be harmful for Dahal, apparently angering New Delhi and helping keep his considerable distance from the southern neighbor. This also contributed to the fall of his government reportedly with the upper hand of India in the process, following the sacking of then Nepal Army Chief Rookmangud Katawal.

Over the period since, ideological differences took place within the Maoist party, splitting it many times.

However almost eight years later, Dahal is once again poised to become PM second time as per the agreement between the Nepali Congress (NC) and CPN (Maoist Center) struck to overthrow the KP Sharma Oli-led government. Here, New Delhi reportedly gave a helping hand in toppling Oli-led government and promised to back Dahal to become PM.

In the power game, apart from Dahal's perception that he would feel better secured with the NC as coalition partner in the government, it is reported that there is a deal between Dahal and New Delhi.

New Delhi is reported to have assured Dahal to help him in the war era cases, the issue Dahal and his party leaders and cadres are afraid of for long. This was also one of the reasons of Dahal's pulling out of the Oli-led government.

And in return, India also wants Dahal to settle long-standing disputes--Madhes issue and accommodate Madhesi people in the constitution. Most importantly, it wants to increase its presence in Nepal's affairs, the kind that it to some extent failed to do during the Oli-led government.

Dahal's 'dithery nature'
Given that Dahal is said to be with vacillating nature and his left origin, India believes little in him as much as it does with NC President Sher Bahadur Deuba, the man who is agreed upon to lead the next government after the nine month's tenure of Dahal as PM. Deuba is also said to be one of the favorites of New Delhi.

However, in his desperate bid to convince New Delhi administration, Dahal, was trying to correct his past mistakes and making promises to strive for balanced foreign relations with neighbors India and China. This was when latest political development took place leading to the overthrow of the Oli-led government and his proposition as next PM.

In an interview to Hindustan Times recently, he expressed his commitment that Nepal would not use one country against the other. He also went on to say, "Last time, I was inexperienced in the ways of competitive democracy. We still had a war mindset from the insurgency years. It took us 10 years of war to understand the nature and rules of war. Now, after 10 years in open politics, I have learnt the rules of competitive democracy. I have more experience and maturity."

He was referring to the time when he failed to rule exceeding nine months after he assumed office as PM in 2008 following his party's sweeping victory in the first Constitution Assembly elections just two years after the Maoist entered mainstream politics, ending the decade-long conflict.

Only time will tell how successful will Dahal's second innings become. However, it seems that Dahal is now well aware of the extent of India's 'interference' in Nepali politics and Nepal's relations with India and China.

India's desperate bid to change Oli's administration
As reported by the media, India was clearly dissatisfied with Nepal's constitution that, it said, failed to accommodate the aspirations of Madhesi people and other ethnic groups. The displeasure resulted in the around-five month long border blockade imposed by India. Ever since, Oli became PM, the rift between Nepal and India grew much. Oli's courage to stand up to the 'bullying' blockade and his supposed 'tilt' towards China in the form of signing of various agreements including fuel trade between Nepal and China infuriated India further.

And to end all these and increase its presence in Nepal's affairs, India was looking forward to a better opportunity to unseat Oli. To serve India's interest, Dahal turned to be a suitable person. And in return, Dahal, who felt insecure with Oli in terms of various matters including conflict-era cases, their competition for the same voters and UML's growing popularity, agreed promptly.

Challenge and opportunity for both NC and CPN (Maoist Center)
Although the much-awaited constitution was promulgated under the NC-led government, the NC, being the largest party in Parliament, feels that it is yet to take full credit until the constitution is implemented under its direct participation being in the government.

The NC has also to retain its good image that was eroded to some extent when the late then NC President Sushil Koirala, in a breach of the agreement with the CPN-UML, fielded his candidacy for the post of PM in the eleventh hour, also an issue that drew criticism from within the NC and other quarters.

Most important issues are Madhes issues, bringing the disgruntled Madhes-based political parties and various ethnic groups on board, implementing the constitution properly, speeding up the post-quake reconstructions, holding three elections in time and controlling growing inflation and thriving black marketeering. The responsibility to carry out these tasks obviously falls on the shoulder of the next government.

It is also important to note that various agreements the Oli-led government inked with China including fuel trade deal should not take a back seat. However, in this regard, Deuba already said that he would prioritize all the agreements between Oli's government and China.

There is also a good opportunity for the Maoist to correct its past mistakes and steer the country in the right direction while maintaining cordial relations with both neighbors. RSS

Will work day in, day out to deliver: PM Dahal