Win or lose, 'Trumpism' will leave its mark 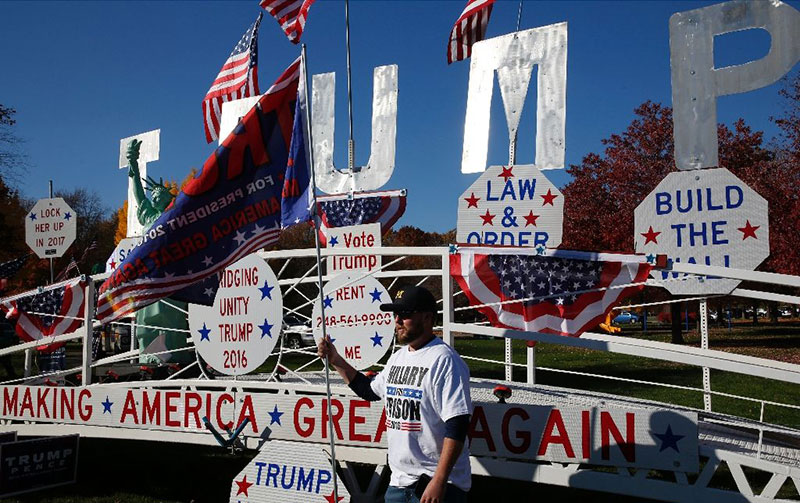 A man poses in front of a Trump sign as he waits to see US Republican Presidential nominee Donald Trump address supporters on November 6, 2016 in Sterling Heights, Michigan (AFP Photo/Jeff Kowlasky)

WASHINGTON, Nov 7: Even if, as most polls predict, he loses Tuesday's US presidential election, Donald Trump's populist charge will leave its mark on the American body politic.

The 70-year-old billionaire tycoon is the Republican flag-bearer even though part of the Grand Old Party's establishment has rejected him, and others are voting for him while holding their noses.

But Trump has managed to craft his own political brand, building a movement among the party's disaffected rank-and-file.

As the presidential race comes down to the wire, and the right faces the prospect of Democrat Hillary Clinton in the White House, some party leaders are coming back to the fold.

But Trump has divided the party, both with his brash style and by overturning conservative orthodoxy with his opposition to free trade, isolationist foreign policy and flexible stance on welfare and deficits.

The maverick newcomer has even campaigned for paid parental leave, anathema to the small-government conservative right.

"They would like his supporters, but his supporters are attached to Trump," he warned, predicting that the phenomenon Trump calls his "movement" will continue after Election Day.

"His supporters are still going to be there, and they are going to have their positions on trade and immigration and all these other issues," Shapiro said.

"And what will also remain is the hate for the Democrats and Hillary Clinton and also the mainstream Republican Party."

But it is not just the foregrounding of a different set of issues that will endure. Trump's in-your-face style and aggressive rhetoric will leave a mark on future campaign strategies.

"We are likely to see more candidates trying to replicate what he has done, trying to work outside the party, to use social media to go over the head of the party," she predicted.

"And we are going to see a lot of rough talk out there, because people will think: 'It worked for Trump, I am going to give it a shot'."

And this change in campaigning style may cross the liberal-conservative divide, as Democrats and progressives respond with heightened rhetoric of their own.

"There is a strain of enormous populism in both the Republican and the Democratic parties and we are going to see that for a long time," Zaino said.

"It is going to be a challenge for these two umbrella parties to recapture this really frustrated base."

But as he has done so, he has insulted or managed to offend women, immigrants, African Americans, Muslims and the handicapped -- deepening America's divides.

Trump has had no problem filling vast halls with motivated voters, but his 60 percent unfavorable opinion poll rating would have sunk a less shameless campaigner.

And his campaign has energized, at least on social media, the American right's racist and anti-Semitic underbelly -- last week, the Ku Klux Klan's newspaper endorsed him.

This toxic coalition may be unique, and mainstream Republicans may be able to distance themselves from the bigoted extremes, but it will not disappear overnight.

This in itself is a victory for Trump's more ideological supporters, like his political advisor Roger Stone.

"The party isn't going to go back to being the country club party of Jeb Bush," Stone told liberal news site Vox.

"It's not going to go back to being the Washington establishment party of Paul Ryan and Mitch McConnell," he warned mainstream conservatives.

Expert opinion is divided about whether Trump himself will want to remain in frontline politics, or whether he will try to rebuild his business brand.

Some of his supporters appear to be maneuvering to create a Trump-branded media platform that could monetize his populist message in a polarized news landscape.

But at the very least, his team has built an enormous database of supporters and donors that will be of inestimable value to whoever next seeks to up-end the apple cart.

Thapa's rise to power; Will he be able to leave his mark?

Surely, Thapa will be tested as is the trend of Nepali politics. Nepali people hardly believe in political leaders because... Read More...

KATHMANDU, July 5: Nearly 300 government staffers appointed to various sectors by the then Deuba-led government have lost their jobs. Read More...

English Premier League side Liverpool announced plans on Wednesday that will see the first team leave their long-time training base... Read More...