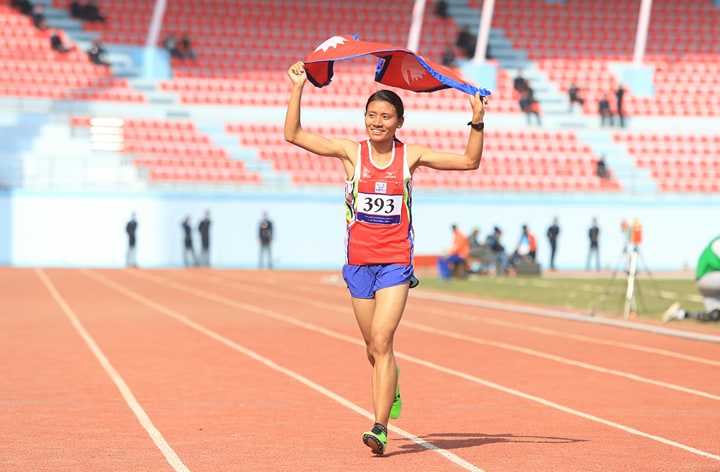 KATHMANDU, Dec 4: Santoshi Shrestha has become the first female runner of Nepal to win an international gold in athletics following victory in the 10,000-meter race at the ongoing 13th South Asian Games (SAG) in Kathmandu on Tuesday.
On the first day of athletics at Dasharath Stadium, Shrestha finished ahead of India’s Kavita Yadav by the smallest of margins of 10 milliseconds, to claim the very first gold medal for Nepal in the medium running category.
Earlier, Nepal’s Kanchhi Maya Koju had won a silver medal in the 2006 SAG held in Sri Lanka.
Shrestha completed the distance in 35:07:94 in her bid to win the gold defeating Yadav, who finished on 35:07:95. Likewise, Sri Lanka’s Nilanthi Lanka won the bronze medal with the timing of 35:59:02.
The run was dominated by Yadav and Shrestha leaving the other competitors way off the mark in comparison to the first and the second runners. And the clash went to the last step as Shrestha just crossed the line ahead of Yadav.
A delighted Shrestha expressed her happiness on winning the first gold for the country, stating that she would have given her 100% in the game whether or not she would win it.
“I always said I’ll give my best and the outcome will happen when I give my 100%.  I was working hard in order to win the gold medal, but I was not completely sure if I’d be able to get it," said Shrestha.
“I was working at my pace for this event. I worked very hard and learnt a lot with the coaches on how to maintain my pace,” Shrestha further added. “I had a fear that I could lose in the final stages of the race since my competitors had more experience than me, having played more games than me.”
Shrestha talked about the experience during the race in the last stages, saying she was quite confused on what to do in order to win the race and leave her opponent behind.
“I had this fear that they might kick in the last stages. I was getting quite puzzled that if I didn’t kick, I’d lose the race. My kickpower is good as well, but I wanted to hit it when I reached the 200 mark, and then thought again that they might have got it reserved.”
In the other categories played on the same day, Nepal failed to add even a single gold medal, but Tanka Karki claimed a bronze for the host.
In men’s 1,500 meters race, Karki finished on 3:59:20 to win the bronze medal after being left behind by gold-medalist India’s Ajay Kumar Saro, who had the timing of 3:54:18. Likewise, India’s Ajeet Kumar won the silver medal finishing the distance in 3:57:18.
In women’s 1,500 meters race, Sri Lanka’s Uda Kuburalage defeated both the Indian competitors to win the gold medal.
Kuburalage completed the distance in 4:34:34, while India’s Chanda and Chitra Palakeez had a timing of 4:34:51 and 4:35:46 to win the silver and the bronze respectively.
Also, India’s Sarvesh Anil KU set a new SAG record in men’s high jump as he made a clearance of 2.21 meters beating the previous record set by M Wijsekara of Sri Lanka who had the bar raised of 2.20 meters at the 2004 SAG in Islamabad, Pakistan.
Anil defeated his compatriot Chethan Balasub, who jumped upto 2.16 meters to win the silver. Bangladesh’s Mahfuzur Rahman claimed the bronze with a clearance of 2.16 meters as well.
In women’s high jump, Indian duo Jishna M and Rubina Yadav won the gold and bronze, respectively. Jishna had a clearance of 1.73 meters, while Yadav cleared the far with a distance of 1.69 meters. Sri Lanka’s Dulanjalee Kum had the total distance of 1.69 meters as well.
Similarly, in women’s 100 meters final, India’s Archana Suseent won the gold medal completing the distance in 11:80 to defeat the Sri Lankan duo of Thanuji Amasha and Lakshika Sugand.
Amasha won the silver with the timing of 11:82, while Sugand finished her race in 11:84.
Also, in men’s 100 meters final, Maldives won its maiden gold. Saaid Hassan won the gold medal finishing the race in 10:49, while Sri Lanka’s Himasha Eashan took 10:50 and won the silver. Likewise, Pakistan’s Sami Ullah won the bronze with the timing of 10:66.

Snowfall forecast due to influence of Westerly trough
10 minutes ago