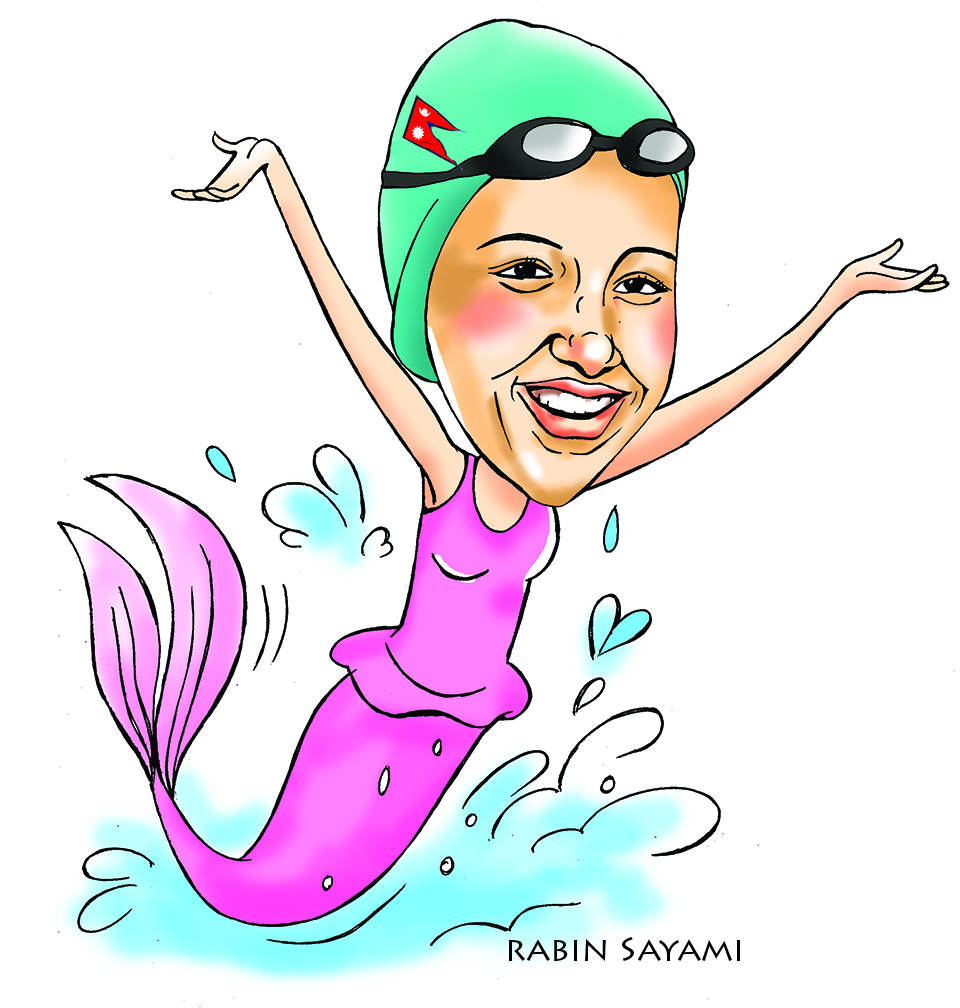 KATHMANDU, June 22: Hard work, dedication and perseverance are the three fundamentals that define Gaurika Singh, at 13 years and 255 days at the time the youngest participant in the Rio Olympics in 2016. Success for Gaurika, who is London-based, did not come overnight. She started swimming at age six and enrolled for professional training at nine. Swimming was initially for her an important life skill and good exercise before she started to move up in the swimming groups and entered competitions. She has now ignited Nepal's medal hopes in the Asian Games and the Olympics .

“I feel immensely proud to represent Nepal and I have always tried to give my level best. I think sport plays a big role in creating a community and brings a sense of unity and national pride. So, hopefully, I've helped create unity among people along with all the other incredible athletes who represent our country,” she says .

She has been a role model for Nepal's youth and for aspiring athletes. With rare exceptions, our sports heroes are mostly men. “Being a feminist myself, I believe that people who make sexist remarks against women are merely jealous at how far women have come. In a country like Nepal, where we have a female head of state and have had a woman chief justice and a woman speaker of parliament, we have come thus far.”

But she believes women still have a long way to go - not only in Nepal but everywhere.

Gaurika is currently preparing for the FINA World Championships to be held in Korea in July and for the 13th South Asian Games (SAG) in Kathmandu in December. She says preparing for a major competition is a different game altogether. “Olympics is difficult and hard, and my coach helps me prepare well. It is a big collaborative teamwork between me, my coach, my physiotherapists and others,” she told Republica.

The year leading to the Olympics was one of intense training, with nine sessions a week on top of three gym sessions. During the Olympics year, she had to focus on perfecting her stroke. Apart from physical training and conditioning, there was also the mental exercise. She had to plan the travel and specific training regimes before an event, factoring in the new environment, jet-lag and other things.

Her performance in Korea and Kathmandu will be crucial for earning enough points to qualify for the 2020 Olympics in Tokyo.

Gaurika lives in London and trains at Copthall Swimming Club under coaches Rhys Gormley and Christine Green. She was two years old when the family moved abroad. Her father, Paras Singh, often accompanies her in travels around the world. According to him, it was Gaurika's own decision not to take up UK citizenship. She prefers to swim for Nepal.

“Physical or hypothetical boundaries don't fudge an athlete's motivation and passion. There are plenty of sportspeople making their country proud on the world stage despite not being born and brought up on home soil. It is all about dedication and hard work,” said Paras Singh in a conversation with Republica.

Gaurika first made headlines during a trip to Nepal in 2014 when she took part in national swimming championships here and broke multiple national records. She was just 11. In 2015, she shattered three national records on the opening day of the 20th Open National and Age-group Swimming Championship. She also competed in the 2015 World Aquatics Championships in Russia the same year.

For her, 2016 was a fruitful year. She set a new national record in women's 200m backstroke during the Irish Open Swimming Championships held at the National Aquatic Center in Dublin. She clocked 2:25.99 to beat her own previous national record of 2:26.93 which she had set during the 12th SAG earlier that year in Guwahati, India. She became the first Nepali swimmer to clinch a medal in an individual event at SAG. And she went a step further, clinching four medals including a silver in the 200m individual medley. She struck bronze in 100m and 200m backstroke and in 400m freestyle. The same year she was at the Rio Olympics and made Nepal proud on the world stage.

Gaurika entered the pool for Heat 1 of the women's 100m backstroke at the Olympics Aquatics Stadium as the youngest athlete in the 2016 Rio Summer Olympics. She completed the event in one minute and 8.45 seconds — 1.14 seconds behind the national record of 1:7.31 that she had set in India .

She won the heats, leaving behind Rita Zeqiri of Kosovo and Samoa's Evelina Afoa in the three-player field. But she was ranked 31st among 34 swimmers, which meant she was not among the 16 athletes to qualify for the next round.

In 2017, she set three more national records in the 20th National Swimming Championships, with timings that were close to male swimmers . She went back to London with five gold medals—and new national records in all the events she participated . She set a new 100m freestyle national record of 1:00.79 minutes in the heats before winning the final in 1:02.03 to better her own mark of 1:01.78 set during the 2016 Irish Open Championships. She also bettered the 100m butterfly record, winning gold with 1:07.69, which was way ahead of her previous mark of 1:10.94 set during the 12th SAG in India.

There was a minor stumble for Gaurika in 2018. She failed to live up to expectations, dropping below her own national record by 00.03 seconds at the 18th Asian Games in Jakarta. She could only complete the 100m freestyle in 1:00.82 minutes, missing her national record of 1:00.79 seconds. China's Zu Minghui won the set in 0:54.67 minutes.

She was back with a vengeance in 2019, winning multiple golds and setting new national records. She managed to improve on her three previous national records in swimming, at the Eighth National Games in Nepalgunj. She took her individual gold medal tally to 12, winning four more -- including one in a team event -- on the final day.

Gaurika swims an average 16-18 hours per week, which equates to about 50-60 km of swimming per week. This is on top of her physical training exercise. To balance this with her studies and social activities, she requires a considerable amount of time management and discipline. She credits her family for making everything possible.

“It has been possible only with tremendous amount of help and sacrifice both from my parents and my brother. My mother often has to drive me to and from school to my swimming training. Around two to three times every week these sessions start around five in the morning.”

As one of the standard bearers of Nepali sport, she is well aware of the progress made by other Nepali sportspersons in recent years.

“Hopefully, the SAG will also be held in December 2019 which should further boost the morale of Nepali athletes like me who train hard for these events. Apart from swimming, Nepali sportspersons are doing well in the international arena in various sports like cricket, body building, etc.”

Swimming started as a good health goal for her and now she carries the national emblem on the world stage. She was good at netball, tennis and gymnastics as well but she had to be selective. She takes inspiration from several swimming greats and other sportspersons but Michael Phelps stands out as an all-time great for his hard work, his world records and the number of Olympic and other international medals he has won. Will Gaurika quench Nepal's thirst for gold in the Olympics? Only time will tell.