Will leave no stone unturned for dev of Madhes: Heavyweights 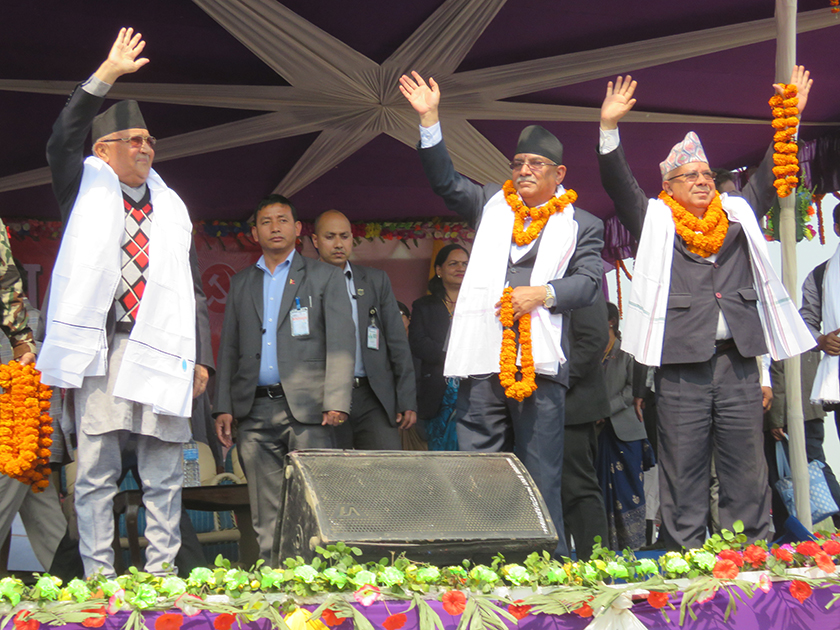 Addressing a mass meeting organized at Garuda of Rautahat in Province 2 today, the trio said the government will leave no stone unturned for the development and prosperity of Madhes region.

Speaking on the occasion, NCP Chairman Oli said that CK Raut, chairman of Alliance of Independent Madhes, joined the main stream politics embracing the Constitutional provisions after having realized that secessionist politics will have no future.

“The government is preparing to allocate a special budget of 2.53 billion for the development of Tarai Madhes,” Oli said, while recalling the moment when he went underground in Rautahat 46 years ago.

Speaking on the occasion, Chairman Pushpa Kamal Dahal assured that there will big changes in the sector of infrastructure development of Madhes in the next four years.  “The government has very well understood the feelings and sentiments of the Madhes,” Dahal said, while making assurances of protecting diverse cultures and customs of Madhes. He also appreciated the Madhesi people saying that they took part in every democratic movement in the past.

One killed, seven injured in Sarlahi as groups exchange gunfire

KATHMANDU, Oct 30 : One killed and seven people were injured when the two political groups exchanged fire at Ramnagar... Read More...

Smart lockdown to be enforced, int’l flights to resume
15 minutes ago

It is difficult to run hotels according to the prevailing policy: HAN
58 minutes ago