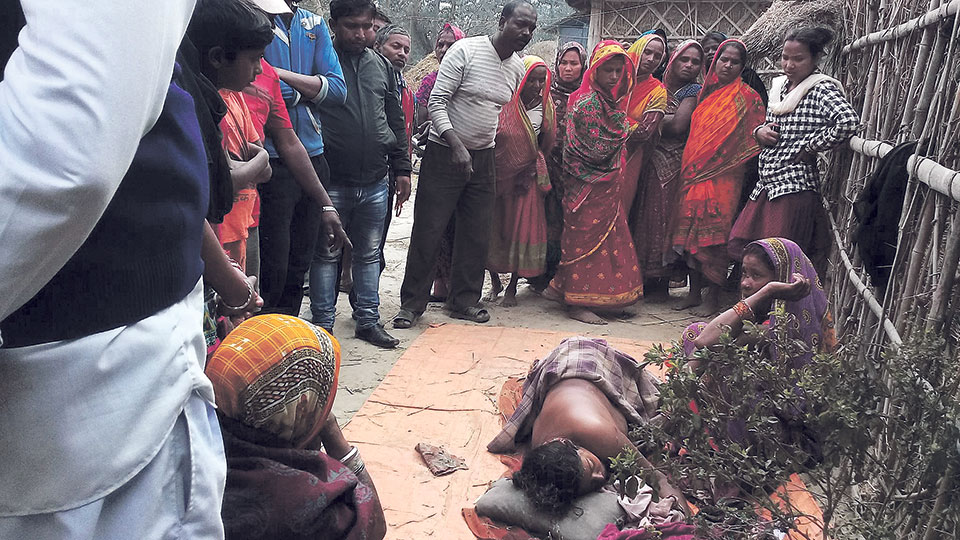 Villagers looking at the body of one of the woman killed in elephant attack in Pathari of Saptari. Photo: Jitendra Kumar Jha/Republica

SAPTARI, Feb 14: Two women were trampled to death by a rampaging wild elephant of the Koshi Tappu Wildlife Reserve (KTWR) which entered their settlement in Saptari on Tuesday.

The deceased has been identified as Durgadevi Mukhiya, 45 and Manjudevi Sah, 35, of Pathari in Kanchanroop Municipality-5. Both of them were attacked by the elephant while they were collecting cow dung cakes in a field nearby their house. They had died on the spot after the attack. Their bodies have been taken to Rajbiraj-based Gajendra Narayan Singh Sagarmatha Zonal Hospital for postmortem.

Wild tuskers from the KTWR have killed six persons in the last 14 months, informed Ram Prasad Sah, conservation officer of the reserve.

Dozens of villages of Hanumannagar, Kankalini, Kanchanroop and Saptakoshi Municipality have been constant targets of wild elephants for over a decade. Locals have time and again staged demonstrations with the objective of drawing the attention of responsible authorities. "The law does not allow us to kill elephants and chasing them away is very difficult," said one of the officers of the reserve.

A few years ago, after continuous pressure from the victims, the reserve administration and police had announced that they would erect electric fences to prevent elephants from entering settlements, but the announcement remains unfulfilled.

Roshan Sah, a victim of elephant attack, said there is no sufficient food for the elephants in the reserve so they enter the settlements. Locals living in the buffer zones often have sleepless nights.

Caption:  The dead body of one of the women who was killed by an elephant on Tuesday.

GULARIYA (Bardiya), Sept 16: Two persons were killed in an elephant attack at Dalla area of Suryapatuwa – 4 on... Read More...

E. coli found in drinking water
5 hours ago
Stockbrokers permitted to operate their own TMS for online trading of shares
13 hours ago