Birgunj struggles to contain the virus

When NMC, Birgunj refused to admit Mahato, he died at the hospital gate

BIRGUNJ, Aug 9 : The rapidly-spreading novel coronavirus has not only cost the lives of the infected people in Birgunj but the chaotic situation has fallen hard on other patients as well. We now know that like the rest of the country, Birgunj was woefully ill-prepared to deal with the pandemic. Families of the victims have decried massive delays in medical response, hassles of PCR tests and the lack of proper counseling. A case in point, Chalitra Mahato, 64, died of coronavirus-like symptoms at the gate of a hospital on Thursday. Though his report a day before had come negative for the virus, the family has questioned the authenticity of the report.

When National Medical College, Birgunj, refused to admit him, he was taken to a nearby hospital where he breathed his last. Mahato, a local of Shripur village, was having health issues for a few days earlier but did not receive medical attention.

On the day Mahato died, the District Administration Office of Parsa had issued a circular demanding all private hospitals to admit patients. This had come in the wake of complaints that patients were being refused entry into hospitals.

Mahato had reached the hospital for the second time. When he approached the hospital 10 days ago, he was asked to come with a PCR test report. He underwent the test at Narayani Hospital and he tested 'negative' for the virus.

"We were deeply worried about his deteriorating health, but the hospital pressured us to produce the PCR test report first. When we had the report, the hospital still refused to attend to him," lamented Shambhu Mahato, the younger brother of the deceased. "He breathed his last at the hospital gate, we couldn't save him," he added.

The local administration has imposed a lockdown in Birgunj Metropolitan City since July 25 and in the entire district since August 3. As Mahato's health worsened, the lockdown made it difficult for the family to get transportation as well as a suitable hospital to take him for treatment. Despite financial stress, the family took Mahato to one of the best medical facilities available here.

"He had irregular fever a few days before his death. We didn't have enough money, but we still took him to the big hospital. But then they asked for a PCR report. It took a few days to get the result, which came out negative," told Shambhu. "He took some medicine from a local pharmacy, and that relieved him. But the problem aggravated and we took him to the hospital. We were confident that the hospital would admit my brother," he added.

The family says the negligence of the hospital and delays to get PCR test results have been killing people in Birgunj. Had the PCR test report come sooner, Mahato would have survived, his family claims. 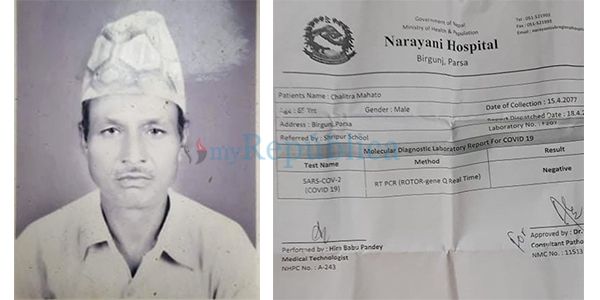 The family had noticed blood in Mahato’s stool and breathing problem a day before his death. When he was rushed to the hospital, the gatekeepers refused them entry. The worried family members left the patient in an autorickshaw and tried to contact the doctors at the hospital. "We met some staffers but they told us Basaruddhin Ansari, managing director of the hospital, should give the permission. And our brother died shortly."

This is a representative case of how patients are dying due to the lack of doctors and hospitals as Birgunj becomes a hotspot for coronavirus. As of this report, 21 people have already died of the virus in Birgunj, and the test reports came after death in many cases. And people like Mahato have died even if they tested negative for the virus.

Meanwhile, the hospital administration has refused the charges. “Some people tell fake stories to defame the hospital,” said Basaruddin Ansari.

BIRGUNJ, Oct 8: The body of a 14-year old girl has been taken under control by Parsa Police while her... Read More...

43 diagnosed with COVID-19 in Birgunj including medic, army personnel and banker