What is in Chairman Oli's letter to NCP’s Standing Committee?

The Standing Committee meeting of the ruling NCP held at the party headquarters in Dhumbarahi on Sunday. (Photo: RSS)

In a letter to the party's Standing Committee, Oli, who is also the Prime Minister, stated that he would be unable to attend the meeting, according to Narayan Kaji Shrestha, spokesperson for the NCP.  Shrestha said the next Standing Committee meeting has been scheduled for December 13.

Taking a strong exception to a political proposal tabled by the other chairperson of the party Pushpa Kamal Dahal, Oli in the letter insisted that he can't join the meeting if the same proposal is presented before the Standing Committee meeting. 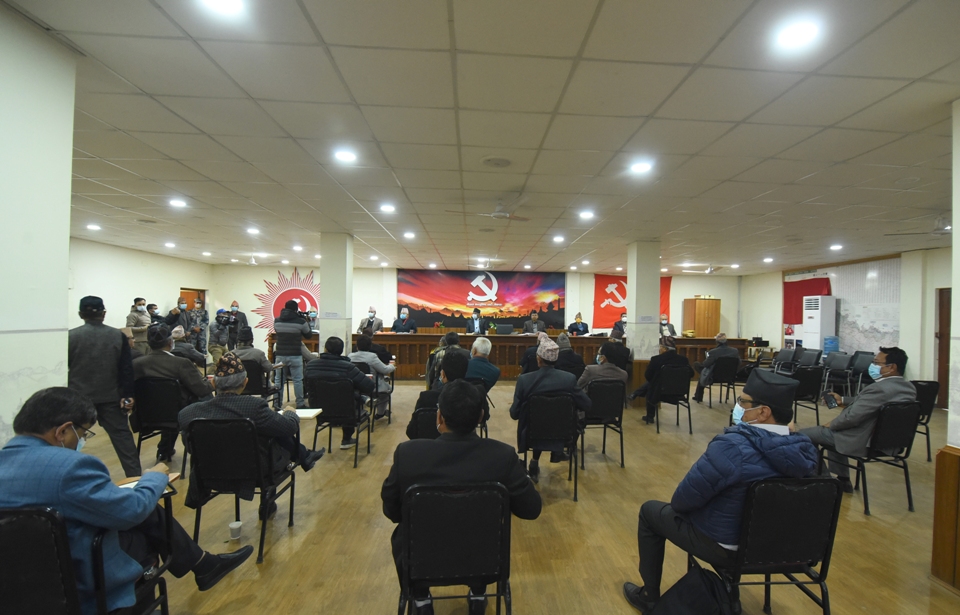 In the letter, Oli has reiterated his previous stance that Dahal should withdraw his political proposal tabled during the Secretariat meeting, unconditionally. He also accused Dahal of working toward dissolution of the party by bringing an "allegation paper" against him.

"I suggest that the Standing Committee meeting should discuss finalizing the pending works relating to the party unification, making preparations for the party's upcoming general convention and working toward better response to the COVID-19 pandemic," Oli mentioned in the letter.

Oli has expressed his determination that he wants to keep the party unity intact and run the party based on consensus.

"The ongoing intra-party crisis must be resolved through dialogue and the party should remain united as there is just four months left to hold the first general convention of the party. The question of leadership change in the party can be well settled through the general convention," the Prime Minister stated.

"Now the Standing Committee's only agenda is to settle the party's internal problem," Spokesperson Shrestha said. Likewise, the Central Committee meeting of the party which was scheduled to begin from December 10 has been postponed for December 16.

Read the full text of the letter below:

1,051 people infected with dengue in a single day
30 minutes ago