What India should know 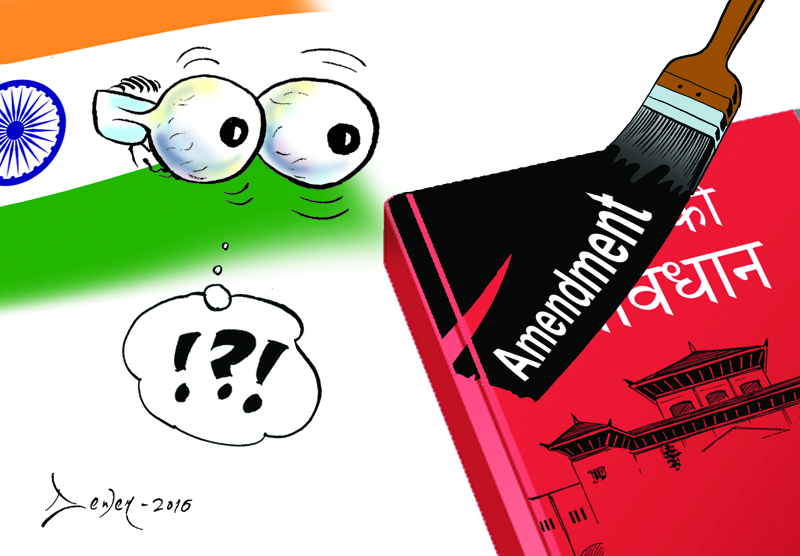 If you had back in 2015 considered alternative voices in Nepal, instead of listening to few loyalists, Nepal-India relation would be much better today

These are the times in Nepal when the debate is not whether local level election will take place on May 14, as planned, but whether Madheshi forces will allow it. Election atmosphere is building across the country. People have started to discuss leaders and parties they will vote for, even predict who will win most seats in the polls that are taking place after two decades.

Amid this hope and uncertainty, some uncomfortable questions also loom: What if Madheshi Morcha resorts to violent protests, as they did in 2015, to foil elections in Madhesh? What if India, once again, resorts to tactics that, in form, look like doings of Madheshi people themselves but, in essence, will be India’s own to get the amendment bill passed before the election?  Why has India, which has ‘welcomed’ every step to amend the constitution that it only ‘noted’ not welcomed Nepal’s decision to go to local polls?

In a country where India’s interests are openly visible in its political affairs, answers to these questions sometime seem like foregone conclusions. Yet, it won’t be irrelevant to keep India informed of certain issues.

Seventeen months after constitution promulgation in September, 2015, some Indian politicians still seem to believe in rumors about Nepal’s constitution. In a conversation with me and Biswas Baral a fortnight ago, Maoist Center leader Narayan Kaji Shrestha (who had just returned from his week-long Delhi trip) expressed his disbelief of how ill-informed Indians are. “They told me Indian women married to Madheshis are not entitled to citizenships in Nepal,” he told us. “I had to remind them that they are entitled to Nepali citizenship the moment they produce proof that they are relinquishing Indian citizenship.”

“I told them that Nepali women married to Indian men have to wait for seven years in India to even start the process of acquiring Indian citizenship, but Indian woman can seek Nepali citizenship right after her marriage in Nepal,” he said. “Such is the misunderstanding India has cultivated about citizenship provisions of our constitution.”
Shrestha is not the only person to tell us so. In an interview with this daily last May, current Nepali ambassador to India, Deep Kumar Upadhyay, had expressed similar concerns. He said Indian leaders judged Nepal’s constitution without reading it. But after they read it “they have started saying there is no constitution as good as Nepal’s in South Asia.” He attributed this misunderstanding to Nepal’s failure to get the English translation of Nepali constitution delivered to India on time. “They understood the reality only when they got the English version and read it. Since, they have started to ask why there are not similar progressive provisions in the Indian constitution.”

India has had reservations on two issues: citizenship and province demarcation. Doubts surrounding citizenship for Indian women married to Nepali men must have been cleared up by now (there is evidence of thousands of such women getting Nepali citizenship after constitution promulgation).

So it bears telling the world’s largest democracy something about why creating plains-only provinces, as demanded both by Madheshi Morcha and India, has become so tricky and difficult in Nepal. There is more to it than the usual ‘reluctance of hill rulers to cede powers to Madheshis’ argument.
As a country with extensive exchanges with Nepal since ancient times, you (choice of second person pronoun is deliberate, nations like human beings have life) should understand the following realities.
You may argue what’s wrong in putting Jhapa, Morang and Sunsari in Province 2, and Kailali, Kanchanpur, Banke, Bardiya, Dang, Kapilvastu, Rupandehi and Nawalparasi in Province 5? You may have been told this has not happened because of resistance from ‘hill elites’ who want to rule over historically marginalized Madheshis in federal dispensation as well. Or because a few hill leaders fear losing their political constituencies in Madhesh. Believing in this narrative as absolute truth, without considering demography of Tarai plains, will be like missing the forest for trees.
In a way, Nepal’s Tarai plains are like a melting pot. There is no majority of one ethnic community in any of the Tarai districts (except in eight districts that have been incorporated in what is Province 2 today). You must have been told this is so because the hill rulers invaded the plains displacing aboriginal inhabitants.
Needless to say, one of the incentives for hill dwellers to migrate down to the south was provided by King Mahendra. He encouraged hill population to migrate to Tarai plains to check Indian influence. But stronger incentive for common hill folks to come down to the plains was something else: food, relief from hardships and prospect of better health and education for their children.
Many of them came down to the plains to escape extreme dukkha (hardship and misery). Due to difficult terrains and infertile soil, even if hill folks worked round the clock, their lands did not bring them enough food to last for more than six months. So poor hill folks (Brahmins, Chhetris and Janajatis alike) sold whatever they had up in the hills to buy some land in the plains that gave them shelter and enough food. The prospect of food and facilities lured many more hill dwellers, leading to depopulation of the hills. By 1991, hill population had declined by 53.3 percent.
These ‘new comers’ did not only ‘exploit’ the resources of the plains but also contributed to improving health and education status in the new land. It is no coincidence that the Tarai districts with significant number of people of hill origin fare much better in terms of their human development.
This cohort of hill migrants lives with the memories of hills and identifies itself as pahahes. In some places, the residents of the plains send food items up to the hills. The plains for them are a source of survival. CPN-UML may be capitalizing on hill-plain interdependence for political gains, but Nepal’s hills and plains have had extremely close relation built on decades of mutual acculturation and cross-flow between the north and the south. Any attempt to alter federal units that does not recognize this fact is bound to be met with protests.
This is the reason no politician can take a decision that riles hill population. This is why Prime Minister Pushpa Kamal Dahal has failed to effect constitution amendment that will permanently hive off hill districts from Province 5. His successor, whoever that may be, won’t be able to do so with ease.
No Indian officials that have served as ambassadors to Nepal, each of whom makes it a point to travel across Nepal from the hills to the high mountains to the plains during his tenure, can pretend to be unaware of this truth.
It bears reminding you of all this now because in recent times you seem to have acted on wrong advice, without considering alternative voices. You cannot have forgotten this.
On September 13, 2015 a journalist from The Hindustan Times wrote rather one-sided report about Nepal urging Delhi to “send a powerful special envoy to Kathmandu” to halt constitution process. Three days later, the same newspaper ran a strong editorial urging the government of India to send “a special envoy to persuade Nepali parties to see sense.”
On September 18, Foreign Secretary S Jaishankar came to Kathmandu as Prime Minister Narendra Modi’s especial envoy. When Nepali leaders expressed their inability to do anything about it (for it had been already too late) and issued the constitution, you imposed a blockade—the blunder that political establishment in India seems to be silently regretting, but the move some Indian agency operatives still justify.
We don’t know if a newspaper editorial prompted you to take such a harsh stand on Nepal in 2015 or there were other factors but if you had also considered alternative voices in Nepal, instead of listening to wrong advice of a few, Nepal-India relation would be much smoother today.
There is a group in Nepal (perhaps also in India) which brands anyone who speaks critically of India as “anti-Indian.” This is an easy weapon to dismiss the opponents. If ‘anti-Indianness’ or ‘pro-Indianness’ are to be judged on this parameter alone, perhaps you will find more ‘anti-Indian’ people in Nepal than anywhere else in the neighborhood. More people hold critical opinions about India. But Nepalis are so dependent on India for virtually everything that they cannot afford to become anti-Indian. They can only be critical.
In 2015, you heeded to your loyalists and made a move that finally backfired. This time, listen to your critics as well.

With drones and satellites, India gets to know its slums

BANGKOK, July 31: Satellites and drones are driving efforts by Indian states to map informal settlements in order to speed up... Read More...