Wear what you want 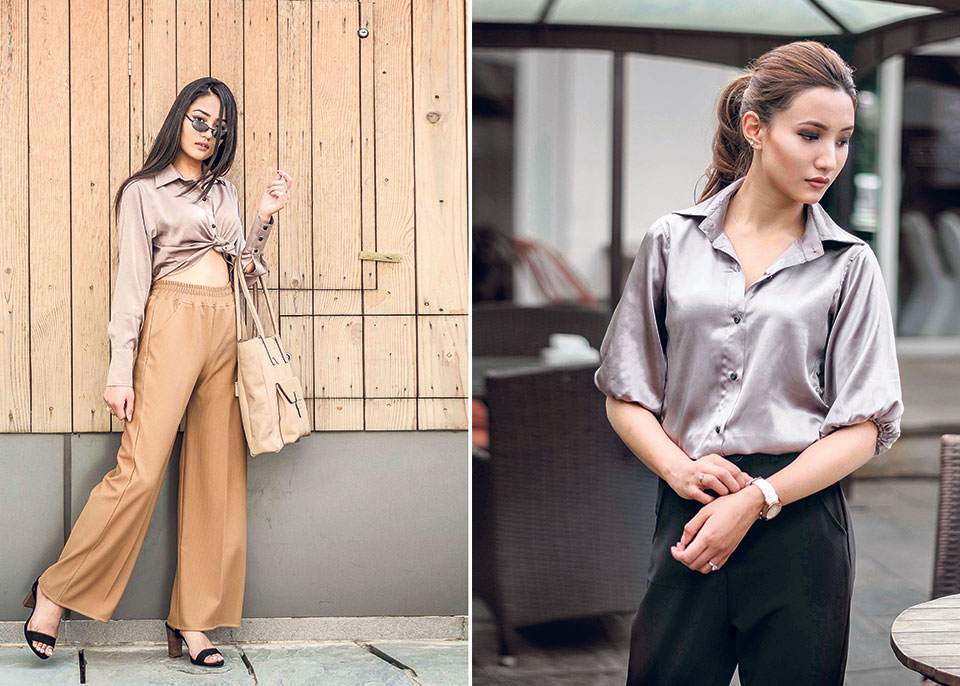 Shiwali Shrestha, media student, swears by an all-black outfit. She can mostly be seen wearing all-black ensembles that usually consist of black jeans, black hoodie, and black sneakers. She describes her fashion sense as being androgynous and often shops in the men’s section at clothing stores. However, ever so often, someone comments on how she dresses ‘like a boy’ or says that she has a ‘weird fashion sense’. Choosing not to follow the gender norms in her clothing choices indeed has a fair share of repercussions.

Gender differentiation in clothing is considered ‘appropriate’ in most cultures. In the past and, to a certain extent, even in the present, Nepali women were and are expected to dress in ‘sarees’ and ‘kurtas’ whereas men were and are expected to dress in ‘daura suruwal’. Even in the west, in the past, women mostly stuck to wearing dresses while men wore suits, trousers, and ties.

Moreover, the androgynous style has ties with the LGBTQA and feminist communities due to their openness to gender fluidity, refusal of gender norms and the use of androgynous style to protest. Androgyny in fashion includes wearing unisex clothes like sci-fi t-shirts, trousers, and hoodies to gender crossing in makeup and styles like men wearing skirts and dresses. However, as of now, some forms of androgyny are normalized while others are still challenged by the society.

According to Janvi Gurung, a fashion enthusiast and an androgynous dresser herself, even in 2019, people still brand those who dress up slightly outside the gender norms as weird. “You can expect such attitudes from the older generations as they devoutly followed gender norms in fashion. But I’ve heard many young people use slurs to put others down just because they aren’t dressed in the conventional way,” she says. She also says she has been branded as a tomboy just because she chooses to wear shirts typically worn by men.

Both Shrestha and Gurung have gotten used to the stares they get due to the way they’re often dressed. “And the clothes that we wear are not even that experimental, they are just oversized shirts, a suspender on top of our t-shirt or a large coat,” says Gurung.

However, they both agree that men have it harder than women when it comes to androgynous fashion. If men try to shop in women’s section at clothing stores, they are often directed to the ‘right’ section. The concept of gender-fluid and inclusive fashion hasn’t really taken hold.

“I have many male friends who want to wear nail polish but they don’t because they are afraid of what people will think of them,” says Shrestha. They both agree that many people seem to hold the belief that guys who like makeup or pink or anything colorful are effeminate.

“People presume that any man who wears pink or likes floral patterns is gay or that any woman wearing neckties or blazers is overtly feminist which is disrespectful to both the communities as well as to androgynous fashion,” adds Gurung.

Kelsang Sherpa, a BBA student as well as a graphic designer, says that he refuses to stick to certain clothes and colors just because he is a man. “Men from the Tarai community often wear floral and shiny shirts and it’s accepted in their communities. It should be the same for us as well,” he says adding that he is not hesitant to flaunt bright colored hoodies even if it means getting criticized by the people around him.

Moreover, he often looks at people in Korea and other fashion-forward places in the world where gender fluidity has become an important part of mainstream fashion for inspiration. “If you look at Korean fashion models or celebrities, both male and female, they wear makeup and jewelry and are pushing the boundaries of gender neutrality with each look,” he says adding that this wave of androgyny in style is yet to hit Nepal.

Manish Khadgi, fashion designer and photographer, agrees with Sherpa’s argument that the full swing with which androgynous fashion has made an impact in the rest of the world is yet to replicate itself in Nepal. However, fashion designers like him are trying to catalyze this process by introducing androgynous-ness in their designs. If anyone were to look at his clothing line Ramp’s Instagram page, they can see that he has designed unisex blazers as well as shirts, pants, and trousers for women that fall outside the accepted gender norms.

Similarly, he had also designed joggers for men in the color beige, which was met with criticism from his male customers, who considered it to be ‘too girly’. “Especially in the case of men, people are still judgmental about colors, so experimenting with, say, skirts or other gender crossing clothes is a far-fetched dream,” he says.

However, in a world where the fashion industry is witnessing the rise in high-profile models who model both men and women’s clothes, it’s perhaps time to be a little more accepting of people’s personal preferences.

Khadgi adds that just because a certain way of dressing is frowned upon by the society it shouldn’t stop anyone from wearing whatever he/she wants. He says that clothes are all about self-expression and comfort.  “Some people like to wear casual clothes while others might want to be more eccentric. And sometimes it means breaking gender barriers and that’s okay,” he concludes.

A lot to learn

In a recent interview with The Week, designer Prabal Gurung said that everyone who is involved in the Nepali fashion... Read More...

Doing what she enjoys

Subi Manandhar is a number of things. She’s a fashion designer, stylist, certified makeup artist and, interestingly, a biker as... Read More...

There are many Nepalis who are doing and accomplishing great things around the world. As their list of achievements grows,... Read More...