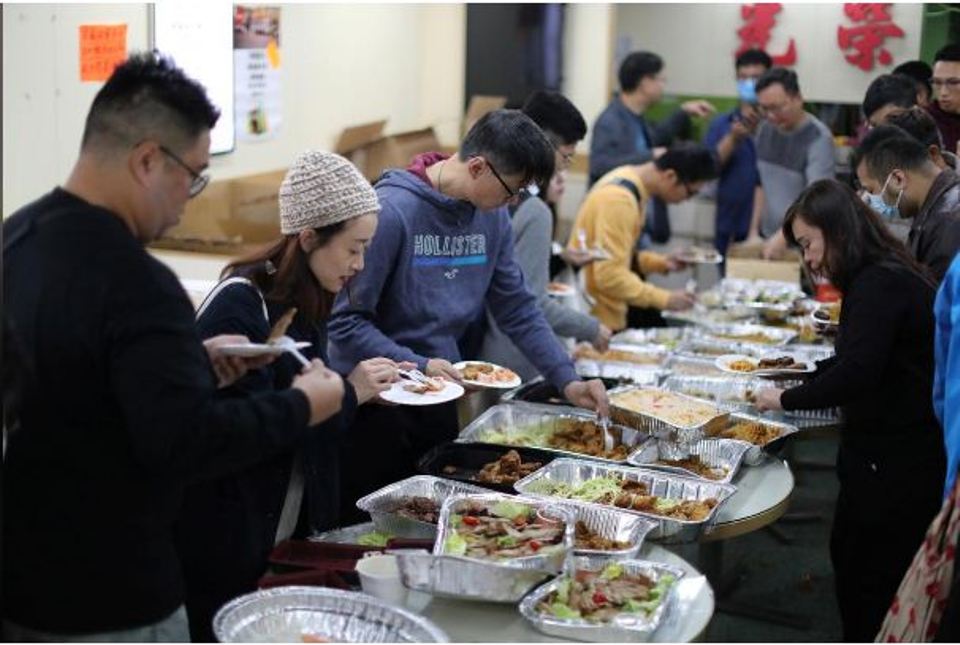 “Hong Kongers are more united this Christmas (than) in previous years,” said Glory, the 31-year-old owner of Kwong Wing Catering, as he dished out noodles, fried chicken, and pasta from silver trays.

“Actually there is no Christmas atmosphere (this year), but there is a strong sense of unity,” he said. All of the food on offer on Wednesday was free and prepared by the restaurant or donated by several sponsors.

Outside the eatery, hundreds of customers, many of them off-duty protesters, waited in line as tourists and other shoppers crowded the popular Tsim Sha Tsui area.

Jeanette, a 22-year-old university student, slurped bubble tea and pudding with her friend Yoyo as they discussed their holiday plans.

They would normally spend Christmas with their families but felt this year had to be different. Both women said they had been involved in peaceful protests since the summer.

“We’re all family now,” said Jeanette, looking around at all of the other supporters eating around her.

“We’re here because we want to support this shop, which has supported so many teenagers and protesters on the front line,” said Yoyo between mouthfuls of pudding.

Kwong Wing Catering is one of many businesses that are part of the so-called “yellow economy” across Hong Kong that is known for their support of the pro-democracy campaign. Colorful post-it notes with words of support from customers decorated the restaurant’s windows.

One of the chefs scheduled to cook at the eatery became a sort of folk hero after cooking for besieged student protesters at Polytechnic University in November.

He was supposed to cook for his supporters on Wednesday but was arrested by police earlier in the week, according to the restaurant’s Facebook page. It was not immediately clear why the chef had been arrested.

Hong Kong has been embroiled in anti-government protests since June which show no signs of abating.

The protesters are angry about what they see as an encroachment by China on the wide-ranging autonomy Hong Kong was guaranteed under a “one country, two systems” framework that governs the former British colony.

Ivan, a 20-year-old university student, said he waited for an hour and a half to receive his hot meal.

“I feel very comforted that someone is willing to cook a meal for us,” he said, adding that Hong Kong still had a “festive” atmosphere despite the protests and clashes with police.

“I just got tear-gassed yesterday so I think it’s very special.”

Photos: Pinnacle installed at top of Bal Gopaleshwar Temple at Ranipokhari
37 minutes ago
Four killed, 10 hospitalized in forest fires in eastern Ukraine
2 hours ago
Former finance minister Khatiwada appointed as Nepal’s envoy to the US
3 hours ago