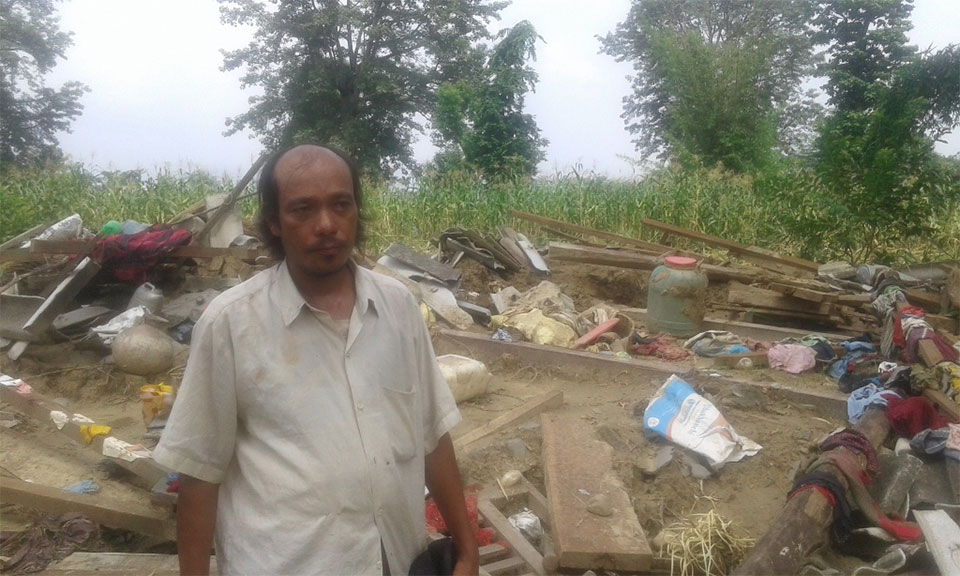 Afflicted Kamilal Tharu who lost his three daughters in the deluge triggered by monsoon mayhem one week ago standing in front of his destroyed house. (Arjun Oli/Republica)

BANKE, August 19: The neighbors are busy reconstructing his house. They are retrieving the buried household goods. But 36-year-old Kamilal Tharu is still loitering around his destroyed house.

Already afflicted by the death of his youngest daughter one month back, the monsoon mayhem last Friday added further woes to him by claiming his remaining three daughters.

“Vivid images of my eldest daughter (sixth grader), Anju, fourth grader sarita and 2nd grader Susmita come flooding into my memory time and again,” shares Thaur in a trance. The deluge triggered by monsoon rains swept away his house along with his loving children few days back.

Tharu is now alone at under-construction house. His 32-year-old wife Fulkumari is taking shelter at her elder sister's house.

Tharu was in Pokhara for livelihood when the disaster hit Lalpur in Raptisonari Rural Municipality-4.

When Tharu returned home dead bodies of his daughters had already been criminated. “I could save my daughters if I were at home,” laments Tharu.

The merciless disaster has left Tharu and his wife childless which they do not want to see happen to others.

They have just two katthas of land in the name of property. The earning they make out of this land does not sufficient to meet both ends of the family.

The government has provided Rs 600,000 as a cash relief to Tharu family few days ago.

Souls of My City: My precious

​“My children are precious for me and I’d give up my life’s earnings to fulfill their needs. My 11-year-old daughter... Read More...

My father was and will always be my superhero!

“Daddy, can you fly?” I asked my father. For me, my father is my superhero and I wanted to make... Read More...