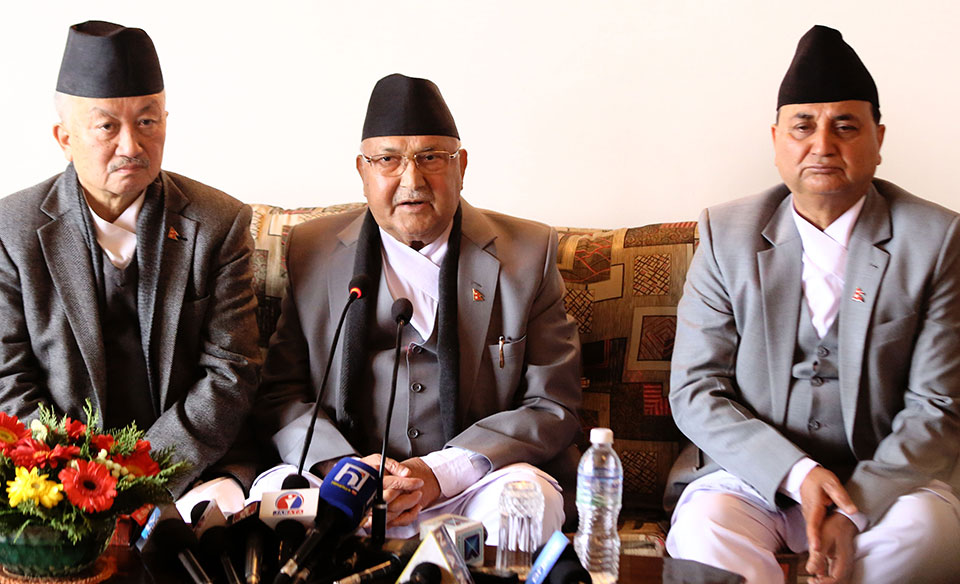 KATHMANDU, Jan 26: Prime Minister KP Sharma Oli has said his visit to Switzerland has been successful in informing the international community about Nepal’s development priorities, the goal of socio-economic transformation of the Nepali society and the policies adopted by the incumbent government to attract foreign investment.

PM Oli stated this while talking to journalists at Tribhuvan International Airport this morning upon arrival home after attending the 49th annual meeting of the World Economic Forum held in Davos of Switzerland.

He said the visit has been fruitful even for apprising the leaders of various countries on the latest political developments of Nepal, the peace process, the changes and achievements after the promulgation of the constitution as well as for deepening the Nepal-Switzerland relations.

PM Oli said while participating along with various world leaders in the full session of the Forum and the two separate discussions on the theme – Strategic Outlook on South Asia and Determining the Future of Democracy, he talked about Nepal’s views on entrepreneurship development, moving forward towards building an equitable society by bridging the gap between the poor and the rich, protection of democracy and press freedom, expansion of connectivity for economic progress and promotion of regionalism.

“I expressed opinion on consolidation of democracy, ensuring the people’s rights on political, economic and social sectors, protection and respect to the sovereign people, and on the inevitability of the press and its responsibility,” he said. The PM added that he expounded in the discussions issues as respecting other people’s rights in a democracy, the responsibility of the press to refrain from disseminating wrong information to individual, families and society and the various aspects of press freedom enjoyed by the Nepali press.

The Prime Minister stated that he held informal interactions with the heads of state and the heads of government of various countries, economic experts, intellectuals, CEOs of multinational companies and other distinguished persons who had come to participate in the WEF meeting. He said in all these meetings he informed that the present government was committed to materializing the goal of ‘Prosperous Nepal, Happy Nepali’.

Responding to the question related to the protest of the main opposition party and other dissatisfied sides on the Federal Parliament passing the National Medical Education Bill on Friday, the Prime Minister stressed on the need of resolving all problems through talks and dialogue.

“Nobody is above the constitution; we should all work by keeping the constitution, laws and the supreme interests of the nation at the centre, not through anger and aggression,” he added.

Meanwhile, before this PM Oli had arrived in Doha, the capital of Qatar, on Friday night en route to Nepal after participating in the WEF annual meeting in Switzerland. In Doha, he was welcomed by Nepal’s Ambassador to Qatar Dr Ramesh Prasad Koirala.

Domestic crises will keep several world leaders away from the annual World Economic Forum in Davos, with only three Group... Read More...

PM Dahal tells Rabi Lamichhane - “I can't give you any ministry now!”
14 hours ago

First governor of NRB passes away
19 hours ago