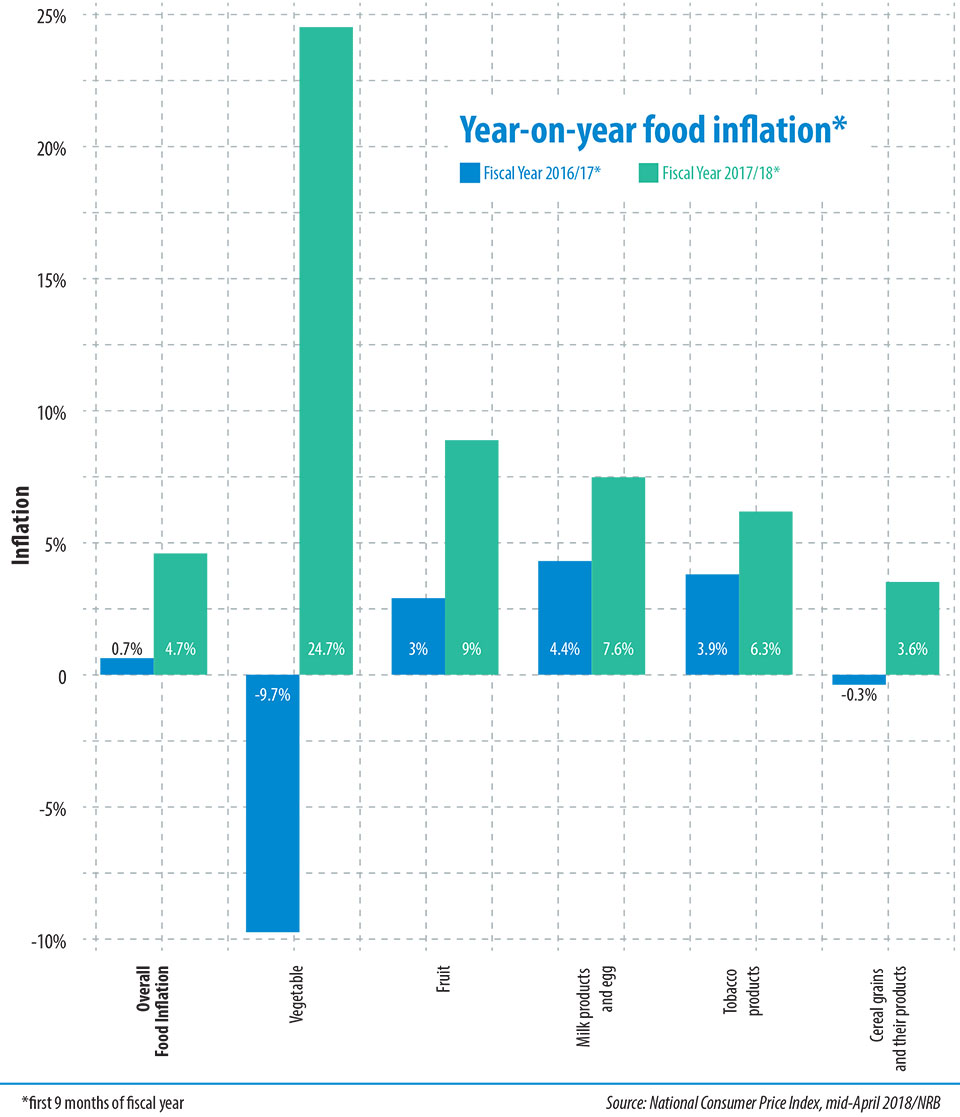 KATHMANDU, May 19: The price of vegetables in the Nepali market has grown by a whooping rate according to the Nepal Rastra Bank (NRB). A report published by the NRB suggests that the vegetable prices have risen significantly by 24.7 percent in the first nine months of this fiscal year.

The vegetable prices in the first nine months of FY 2016/17 had fallen by 9.7 percent. As a result of the excessive inflation in vegetables, the overall food inflation stands at 4.7 percent. This in the review period in the last fiscal year was 0.7 percent. Meanwhile, the inflation in price of fruits has surged by 6 percent. While in the first nine months of FY2016/17, the inflation rate stood at 3 percent, this year it has increased to 9 percent. The NRB statistics suggests that the milk products and eggs have also seen a significant growth in inflation by 3.2 percent as the percentage inflation on these products which stood at 4.4 percent increased to 7.6 percent.

Factors such as the massive flood of August 2017 devastated the production of vegetables in major production areas in a peak production season. Also, the widespread shortage of vegetables in the Nepali market during winter seasons caused the vegetable price to tower way above the line, said Shrestha. He further added that the surge in price of fuel has caused the transportation cost of vegetables to go up, a bulk of which comes from India. This includes vegetables like onion, tomato, lady's finger and pointed gourd (parbal) among many others.While Shrestha cited the dramatic hike in inflation rate to decreased production, Khem Raj Joshi, information officer and senior vegetable development officer at the Vegetable Development Directory suggests otherwise.

“However, the gap between consumer price and the price a farmer gets while selling his/her products is just too large. If a farmer sells vegetable for Rs 10 per kilogram, the consumer has to pay Rs 60 for the same vegetable,” Joshi added. “And such large gap has caused unnecessary price hike in market price of vegetables as traders do not have to pay any money for grading and packaging of these vegetables, as none of it is done.”

Furthermore, Joshi claimed that such monopoly of middlemen in the Nepali vegetable market mainly due to the lack of a 'market regulation' to monitor and curb such irregularities.

KATHMANDU, March 2: The cabinet on Tuesday endorsed Electricity Regulatory Commission Bill 2017, paving way for the tabling of the much... Read More...

Hearing on HoR dissolution to continue tomorrow
22 hours ago

Student in-charge of Biplab-led Maoist group arrested in Chitwan
22 hours ago
Why are murder-suicide cases among couples on the rise?
10 hours ago