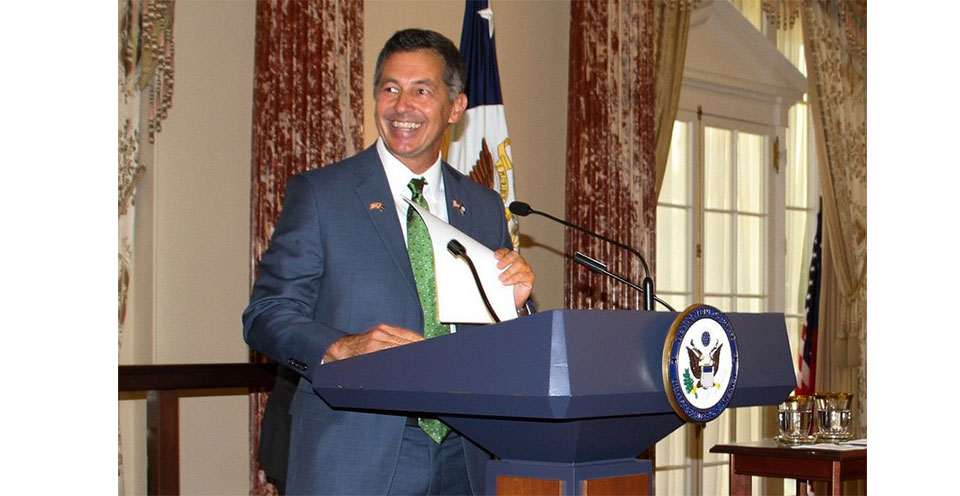 KATHMANDU, Feb 1: United States Ambassador to Nepal Randy Berry skipped a diplomatic briefing to the foreign diplomats based in Kathmandu hosted by the government on Friday.

The US envoy refrained from attending the diplomatic briefing few days after the United States sought Nepal government's official position on the ongoing Venezuelan crisis.

The US envoy's boycott has been interpreted as the US displeasure over Nepal's position on the ongoing Venezuelan crisis.

A source at the US Embassy in Kathmandu told Republica Online that the ambassador is in Kathmandu. However, the source denied commenting on why the ambassador preferred to shun the diplomatic briefing, which was attended by most of the head of diplomatic missions including India, China, Israel, and Russia.

However, Mike Gonzales, the deputy chief of mission of the US embassy, participated in the diplomatic briefing at the presence of Prime Minister KP Sharma Oli, Cabinet ministers and high-ranking government officials.

During the briefing, Foreign Minister Pradeep Kumar Gyawali briefed the diplomats on the government's priorities on foreign and economic policies as well ongoing preparations for the upcoming Nepal Investment Summit to be held in March in Kathmandu, according to Prime Minister's Foreign Relations Advisor Rajan Bhattarai.

Meanwhile, US Embassy’s Spokesperson Andiea De Arment told Republica Online “The Embassy communicated our plans for American attendance at today’s briefing to the Foreign Ministry in advance of the event.”

Even as the government's official statement on the ongoing political crisis in Venezuela tried to distance itself from the ruling party chairman Pushpa Kamal Dahal's statement criticizing US and its allies, this has failed to impress the US officials in Kathmandu.

Diplomatic sources said US officials have taken the statement issued by Ministry of Foreign Affairs (MoFA) on the Venezuelan crisis as not essentially different in its content as compared to Dahal's previous statement, although “the language has been improved with fine editing.”

The MoFA statement on Tuesday had stressed the need for resolving the Venezuelan crisis “free from external interference”—something US officials in Kathmandu have described as continuation of Dahal's earlier statement. “The statement fails to clear any air of confusions. Although the language has been changed, this contains no different intention,” added the sources.

Although the MoFA statement did not specifically mention the name of any countries, it emphasized the need for resolving the ongoing political crisis in Venezuela without “external interference.” “In line with its principled position, Nepal believes that internal political problems of a country need to be resolved within its constitutional parameters in a democratic manner, free from external interferences,” the MoFA statement said.