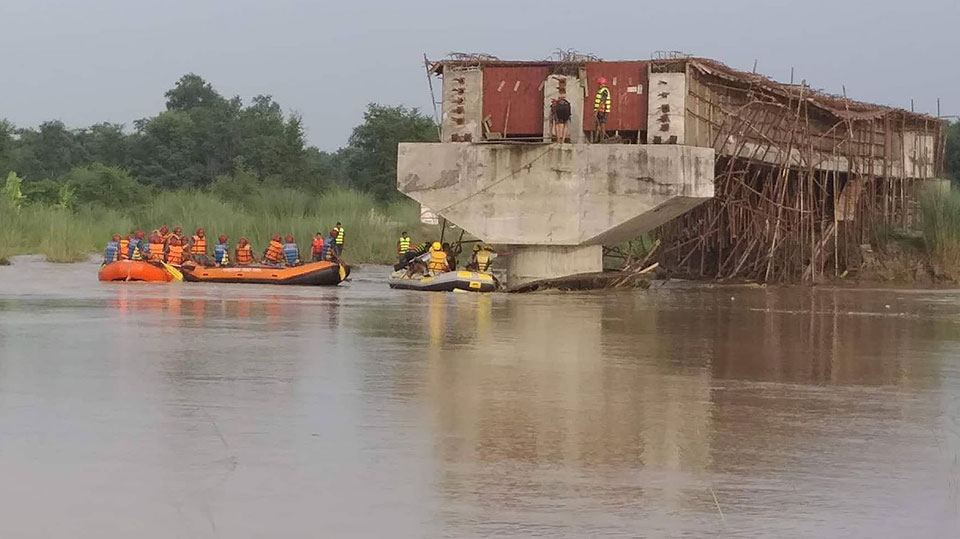 UPDATE
RAUTAHAT, Aug 26: Two of the five missing have been found dead on Sunday. The deceased have been identifyed as Runa Devi-35 of Auroiya, Ishnath Municipality and Shanti Devi-50 of Gaur Municipality. Rescue operation to find the missing is ongoing.

RATUTAHAT, Aug 26: Total 21 people were rescued whereas, five are still missing after a boat capsized in the swollen Lalbakaiya River in Rautahat, Saturday evening. Searching operation of those missing has been intensified with the help of security personnel and locals, informed local administration.

Mahendra Sahani, who was rescued, said there were altogether 26 on board. Omprakash Chandrabanshi, Indu Devi-40 and Shanti Devi-50 of Gaur Municipality-4, and Runa Devi-35 and Ushama Kumari Patel-10 of Ishnath Municipality.

A rescue team comprising security personnel from Nepal Police, the Armed Police Force and the Nepal Army are deployed at the incident site.

According to the boatman, Pappu Singh, some others might have crossed the river to the Indian side. They have also requested Indian police in Guwabari, the bordering town, to help them trace those still out of contact.

The boat  capsized at around 7:30 pm on Saturday.

According to Chief District Officer Govinda Rijal, some people saved themselves by swimming ashore.

The incident took place after  the water level in the flooded Lalbakaiya River increased suddenly as the boat was heading from Ishnath Municipality area toward Tikuliya in the district headquarters Gaur. Those on board were said to be farmers including men, women and children returning  home after collecting grass in their fields.

Demand for action against Pappu Construction from all quarters

RAUTAHAT, Aug 28: Stating that negligence from Pappu Construction was to be blamed for Saturday’s deadly boat accident, there has been... Read More...

RAUTAHAT, Aug 27: On Saturday, Dinesh Patel of Gaur Municipality-4, Rautahat, was preparing for Rakshya Bandhan, the festival which celebrates the... Read More...