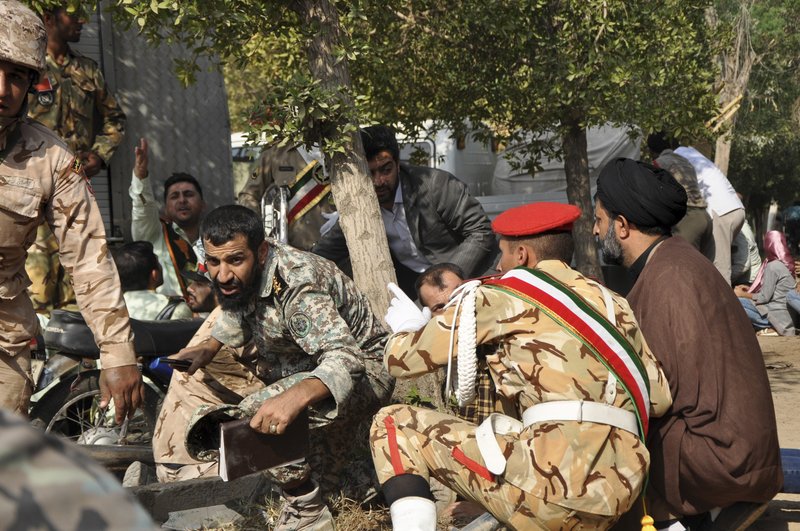 No group immediately claimed responsibility for the assault in Ahvaz, which saw gunfire spray into a crowd of marching Guardsmen, bystanders and government officials watching from a nearby riser. However, Iran faced a bloody assault last year from the Islamic State group and Arab separatists in the region have attacked oil pipelines there in the past. Iran’s Foreign Minister Mohammad Javad Zarif immediately blamed the attack on regional countries and their “U.S. masters,” further raising regional tensions as Tehran’s nuclear deal with world powers is in jeopardy after President Donald Trump withdrew America from the accord.

“Iran will respond swiftly and decisively in defense of Iranian lives,” he wrote on Twitter.

State television aired footage of the aftermath of the assault on Ahvaz’s Quds, or Jerusalem, Boulevard, which like many other places around the country saw an annual parade marking the start of Iran’s long 1980s war with Iraq. The images included paramedics trying to help one person in military fatigues as other armed security personnel shouted at each other. The semi-official ISNA news agency published photographs of the attack’s aftermath, with bloodied troops in dress uniforms helping each other walk away.

A local news agency in Khuzestan province, of which Ahvaz is the capital, aired grainy mobile phone footage showing parade goers fleeing as soldiers lay flat on the ground. Gunfire rang out in the background.

“Security forces have restored security in the area but the parade has totally been disrupted,” a reporter on the scene for Iranian state television said by phone in a live broadcast. “People have been killed but we have no figures yet.”

Zarif on Twitter said that the gunmen were “terrorists recruited, trained, armed & paid by a foreign regime.” He did not immediately elaborate. However, Arab separatist groups in the region have launched attacks on oil pipelines there in the past and Iran. The separatists also accuse Iran’s Shiite theocracy of discriminating against its Sunni Arab citizens. Iran has blamed its Mideast archrival, the Sunni kingdom of Saudi Arabia, for funding their activity.

Reports of how the attack unfolded remained unclear immediately afterward. The state TV reporter said the gunfire came from a park behind a riser. The semi-official Fars news agency, which is close to the Guard, said two gunmen on a motorcycle wearing khaki uniforms carried out the attack.

The state-run IRNA news agency said the attack killed 24 people and wounded 53, citing “knowledgeable sources” without elaborating. It said gunmen were dressed in Guard uniforms and targeted a riser where military and police commanders were sitting.

Khuzestan Gov. Gholamreza Shariati told IRNA that two gunmen were killed and two others were arrested.

Who carried out the assault also remained in question. State television immediately described the assailants as “takfiri gunmen,” a term previously used to describe the Islamic State group. Iran has been deeply involved in the fight against IS in Iraq and has aided embattled Syrian President Bashar Assad in his country’s long war.

Among those involved are members of the Revolutionary Guard, a paramilitary force answerable only to Supreme Leader Ayatollah Ali Khamenei. The Guard also has vast holdings in Iran’s economy.

Meanwhile, Guard spokesman Gen. Ramazan Sharif told ISNA that an Arab separatist group carried out the attack, without elaborating. However, those groups in the past previously have only attacked unguarded oil pipelines at night.

Saturday’s attack comes after a coordinated June 7, 2017 Islamic State group assault on parliament and the shrine of Ayatollah Ruhollah Khomeini in Tehran. At least 18 people were killed and more than 50 wounded.

Khomeini led the 1979 Islamic Revolution that toppled the Western-backed shah to become Iran’s first supreme leader until his death in 1989. The assault shocked Tehran, which largely has avoided militant attacks in the decades after the tumult surrounding the Islamic Revolution.