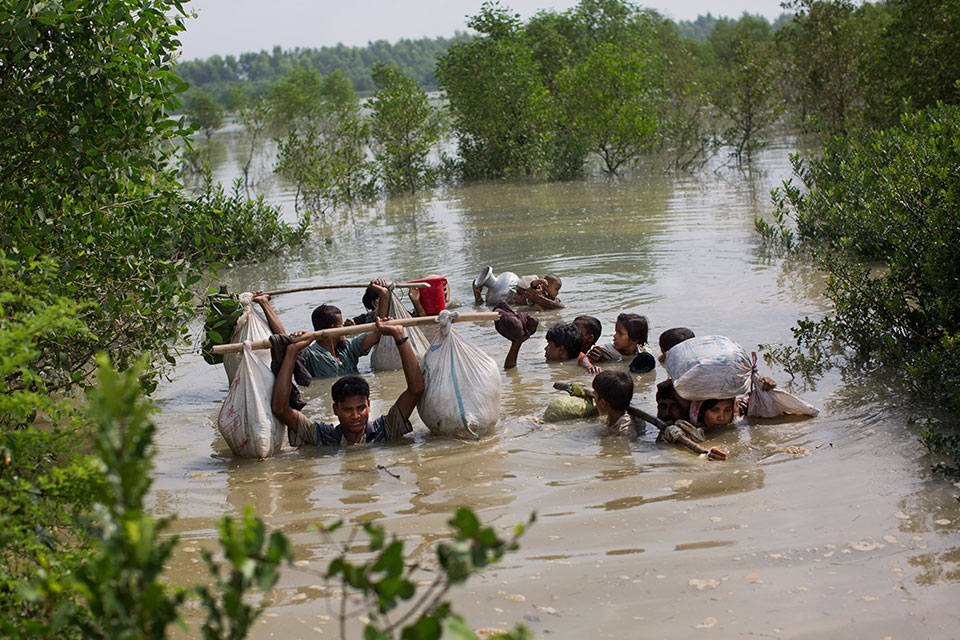 A Rohingya family reaches the Bangladesh border after crossing a creek of the Naf river on the border with Myanmmar, in Cox's Bazar's Teknaf area, Tuesday, Sept. 5, 2017. (AP)

The U.N. refugee agency said a total of 123,000 refugees have fled western Myanmar since Aug. 25.

"The numbers are very worrying. They are going up very quickly," said UNHCR spokeswoman Vivian Tan.

The agency was pleading for assistance, saying it needed more land to be made available so it could set up new camps to accommodate refugees who were arriving hungry, traumatized and in need of medical assistance.

"Most have walked for days from their villages — hiding in jungles, crossing mountains and rivers with what they could salvage from their homes," the agency said in a statement.

"An unknown number could still be stranded at the border," it said.

Many told stories of their homes being set aflame and Myanmar soldiers firing indiscriminately around their villages in Rakhine state.

In the border town of Kutupalong, an elderly woman bleeding profusely from where her lower right leg had been blown off in an explosion was bundled into a rickshaw to be taken to a hospital. Wailing family members told The Associated Press she had been wounded in a land mine blast. Her left leg and parts of her hands also appeared seriously wounded.

Tens of thousands of new refugees have been taken in at established camps that have been housing Rohingya since the 1990s, but those camps have reached "breaking point," the U.N. refugee agency said. Thousands of others were now sheltering under emergency tents, in makeshift camps or out in the open wherever they found space.

Aid agencies said there was an urgent need for emergency shelters and medical aid as more refuges continue to arrive.

They began streaming into Bangladesh after Aug. 25, when Rohingya insurgents attacked Myanmar police posts, prompting security forces to respond with days of "clearance operations" they said were aimed at rooting out insurgents from villages.

Both Myanmar security officials and Rohingya insurgents accuse each other of committing atrocities in the last week.

Infographics: More than half a million Rohingya have fled to Bangladesh

Thousands more Rohingya Muslims are fleeing to Bangladesh in a new surge of refugees driven by fears of starvation and... Read More...