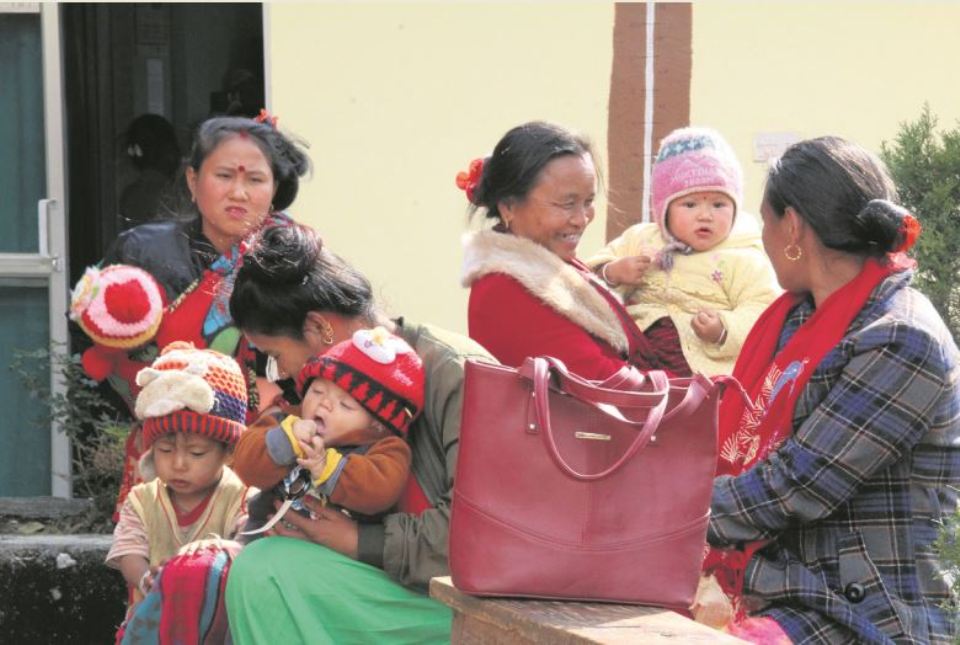 PALPA, Jan 21: Anita Gharti of Gothadi village of Palpa is just 20 but she already has two kids. The elder one is two and the younger one is just four-month-old. The marriageable age, going by the law, is 20 for both male and female. Gharti had married three years ago, when she was 17.

Gharti is not the only woman in the village to get married before 20. Child marriage is in fact quite common in the villages in Palpa, according to Yagyamurti Timilsina, district representative of INSEC, a human rights organization.

Sarita Reshmi, who too got married before reaching 20, says the lack of awareness 'pushes men and women to a dark world.' She is 18 and already has a son. A local of Damar village regrets that she quit school after marriage and 'can hardly continue it' due to family problems.

Sharada Barhaghare and Asmita Gaha of different villages of Palpa also stated that they would not have decided to marry so early. Both of them are 18 years old.

The young mothers were spotted on Sunday when they came to a temporary family planning camp at Mathagadhi Rural Municipality - 4.

According to Timilsina, early motherhood has taken a serious toll on the wellbeing of a huge number of women and children in Palpa. Poverty, lack of education and awareness have triggered the sorry scenario, he noted. "The government says you cannot marry before 20 years of age, but in practice, many are marrying even before completing their secondary education," he said. "Child marriage is one of the most serious social issues we are facing and combating. This necessitates due action from all quarters of society," he added.

Chair of Mathagadhi Rural Municipality, Santosh Kumar stated that the local units have been carrying out awareness campaign against child marriage. "We have been collecting data. We have taken this matter very seriously," he said. He added that local representatives no more attend such illegal marriage ceremonies.

Meanwhile, Keshab GC, chief of the health department of the rural municipality, stated that child mortality rate is high in Palpa. Similarly, many women lose their lives due to complications during delivery. "Child marriage is the reason of all such issues. Girls and boys quit school to marry; this brings about a number of serious problems in their lives later," he said.

GC further said that Kumal, Magar and Dalit communities are found to be more inclined to settle down at an early age.

A total of 43 mothers attended the camp on Sunday. Eight of them were below 20 years of age. The data of the district health office reports that at least 12 to 15 new born babies born from women below 20 years of age die annually in the rural areas of the district.  Kachal, Koldanda, Satyawati, Baldhengadhi, Juthapauwa, Bakamlang, Sahalkot, Mityal, Gothadi, Jalpaa and Bhirubas, among other villages in the district are infamous for child marriage.

Recently, a physician affiliated with one of the premier private hospitals in Kathmandu wrote about present day working environment in... Read More...

BHAKTAPUR, April 8: The public has been observing foreigners celebrating many festivals including Holi, Gai Jatra and Bhai Tika. On Sunday,... Read More...