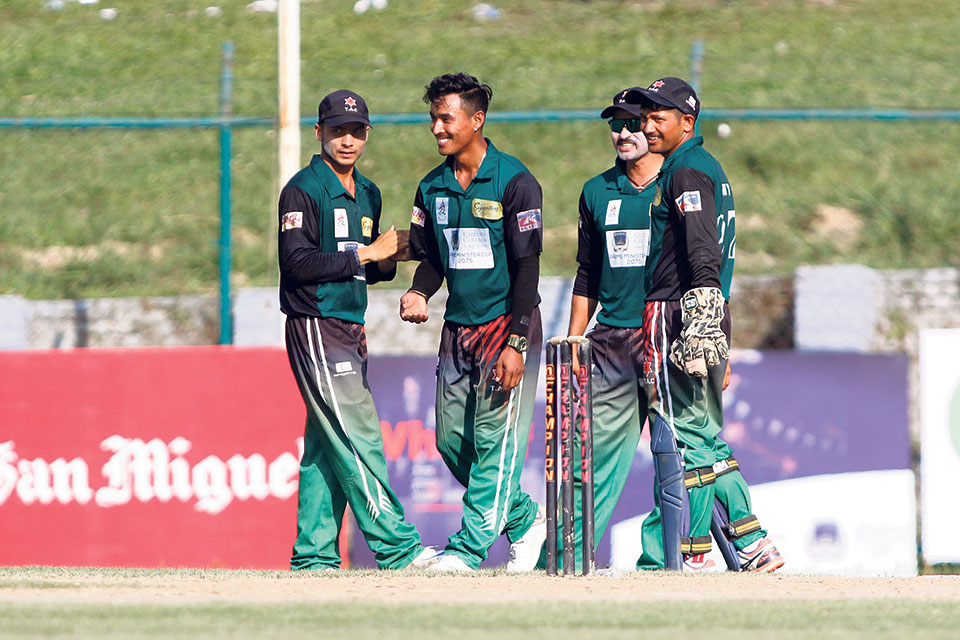 Sompal Kami of Tribhuvan Army Club (second left) celebrates with his teammates after taking a wicket of Armed Police Force Club during a Group A match of the Inter-provincial Prime Minister Cup one-day cricket tournament at the TU Cricket Ground in Kirtipur on Tuesday. Photo: Republica

KATHMANDU, June 6: An all-round bowling effort from Tribhuvan Army Club, with four bowlers sharing 10 wickets, has put the departmental team on top of the Group A to face the second-placed Group B team for the semifinal match on Thursday. Similarly, Armed Police Force (APF) Club, who lost the match by 70 runs, will face the Group B table-toppers on Friday.

Army’s Sompal Kami, who made a comeback in his second spell to pick three wickets after going expensive in his first spell, led the Army charge supported by spin-trio Sagar Pun, Susan Bhari and Shahab Alam’s two each to bundle out APF for 158 runs defending the total of 228 in a reduced match of 40-over per side in Kirtipur on Tuesday. APF batsmen were guilty of making starts but failing to convert it into substantial innings cost it the match with a bigger margin.

Amar Singh Routela’s late order cameo of unbeaten 29 runs came at a strike rate of 181 with three sixes but it was too little and too late for APF’s likening. Raju Rijal had an excellent day behind the wickets as he completed three catches and made an important and clever run-out of Rohit Kumar Paudel who was looking good batting at 28 runs from 40 deliveries including three fours. Bhuvan Karki (26 runs), Anil Sah (25) and Subash Khakurel (22) all made starts but failure to carry on with the innings cost the team the match with wickets falling at regular intervals.

Earlier, APF won the toss and invited Army to bat first. The match was reduced to 40-over per side after a wet outfield delayed the match by an hour in the morning. The batting team raced on to 159 for the loss of Sagar Pun who missed his fifty by four runs in the 32nd over. Pun faced 55 deliveries and smashed three boundaries and three sixes. His opening partner Anil Mandal registered his first fifty of the tournament and made 72 runs from 99 deliveries including seven boundaries.

The total was boosted by Army skipper Binod Bhandari’s breathtaking 22-ball fifty, a new record in the PM Cup. The right-handed dasher smashed five sixes in his innings before losing his stumps to Basant Regmi. However, a collapse in the last few overs of the first innings saw Army lose nine wickets for 69 runs as it ended up with 228 runs getting all out on the last ball of the 40th over. Left-arm spinner Karki picked up three wickets supported by Karan KC, Kamal Airee, Regmi, and Prithu Baskota sharing a wicket each.

With only one match to go against the fellow unbeaten team in the group, Province 5, department team Nepal Police Club was only formalities away from making it to the semifinals of the tournament played in Mulpani on Tuesday. Police defeated Province 3 on Tuesday by six wickets to go on top of the group B. Province 5 is lying on the second spot languishing by net run-rate but with same number of points. Both teams will play each other on Wednesday in the last group stage game of the tournament.

Opening batsman Sunil Dhamala scored an unbeaten 50 runs including two fours and three sixes carrying his bat throughout the chase to ensure Police overcome the target of 138 runs by six wickets. However, the Police innings was struggling at one stage when they lost three quick wickets of Dilip Nath (0), Dipendra Airee (1) and Kushal Bhurtel (9) for 25 runs at the end of four overs. Aarif sheikh then smashed 66 runs from 54 deliveries including six fours and two sixes in a partnership of 110 runs with Dhamala to take Police home. Province 3’s Rupesh Shrivastava picked up two wickets.

Earlier, pace-duo Lalit Singh Bhandari and Ram Naresh Giri picked up two and three wickets respectively to make major dents in Province 3 batting. Aadil Khan (45) and Sonu Tamang (48) made crucial double-digit scores for the Province 3 to take its total to 137 in 20 overs. Police’s skipper Manjeet Shrestha and player of the match Sheikh picked up a wicket each. 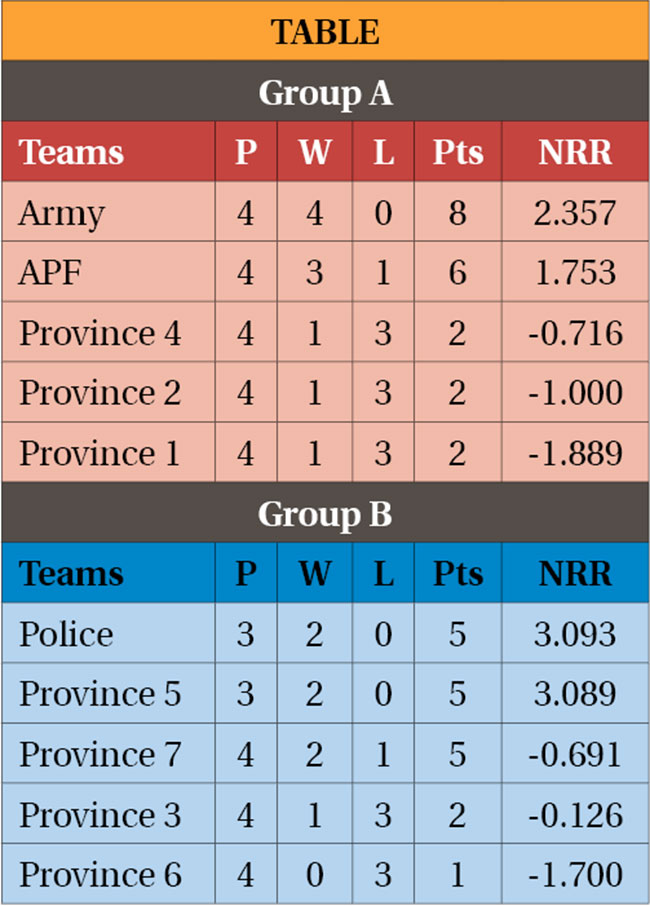