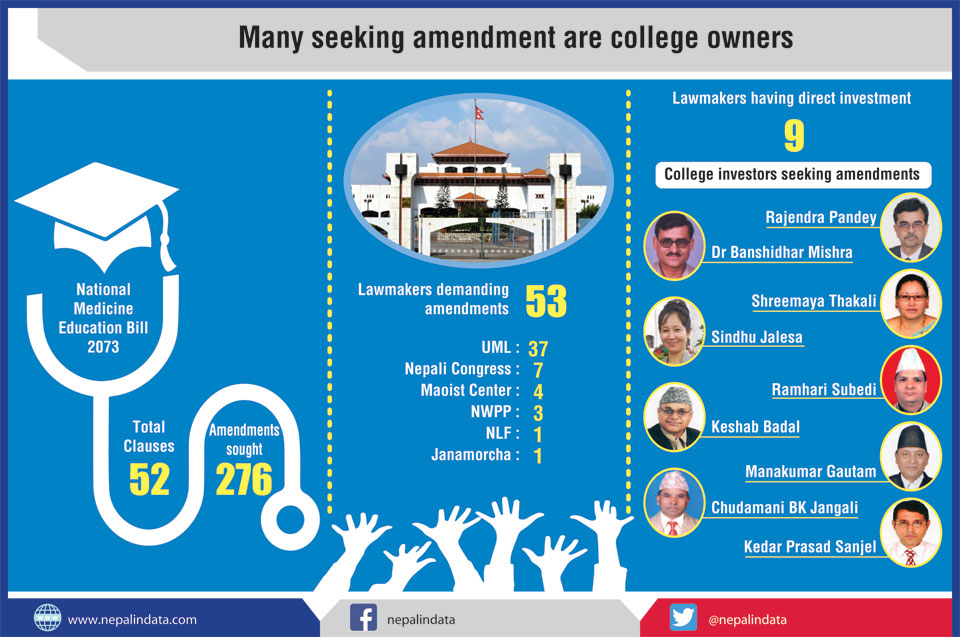 KATHMANDU, August 6: Lawmakers with their investment in the medical sector have filed amendments to kill or weaken important provisions of the National Medicine Education Bill currently under considerations in the parliamentary committee. This has made experts worried that the medical sector could get even worse if the amendments sought by the lawmakers are incorporated in the Bill.

The amendments against important provisions made by Kedar Bhakta Mathema-led Commission and Medical Education Commission are ostensibly aimed at benefitting over a dozen medical colleges, currently awaiting affiliation.  A medical education-related national bill is currently at the parliament's Committee on Women, Children, Senior Citizens and Social Welfare.

Altogether 53 lawmakers have filed 276 amendments to various 52 clauses of the Bill, which is under consideration by the parliamentary committee for nearly a year now. The amendments seek to weaken or kill the provisions concerning new affiliations to medical colleges, letter of intent and formation of Medical Education Commission and limit the role of or remove the provision to determine tuition fees of medical education. These are the key demands of agitating Dr Govinda KC.

According to the details obtained from the Parliamentary Committee, 37 of the total 53 lawmakers seeking amendments in the Bill belong to the CPN-UML. Likewise, The number of lawmakers seeking amendments from the Nepali Congress, CPN (Maoist Center), Nepal Workers and Peasants Party are 7, 4 and 3, respectively. One each lawmaker from People's Front Nepal and Nepal Loktantrik Party have also sought amendments.

Dr KC has been staging fast-unto-death protest for the last 14 days demanding that the Medical Education Bill be enacted in line with the provisions recommended by Kedar Bhakta Mathema-led committee and the suggestions given by Dr KC himself. The major political parties have failed to reach to any consensus on the key provisions of the bill as UML lawmakers have vested interests in the bill.

Former TU Vice Chancellor Mathema, who led the committee, said the proposed amendments, if made, will kill the very spirit of the Medical Education Bill. "We have not made our recommendations arbitrarily. Our suggestions are like prescriptions. There is no point introducing the bill if the proposed amendments are incorporated as they are," he said.

KATHMANDU, Aug 2: It has been revealed that the erstwhile Pushpa Kamal Dahal-led government did not withdraw the bill on... Read More...