UML to obstruct House from tomorrow over constitution amendment bill 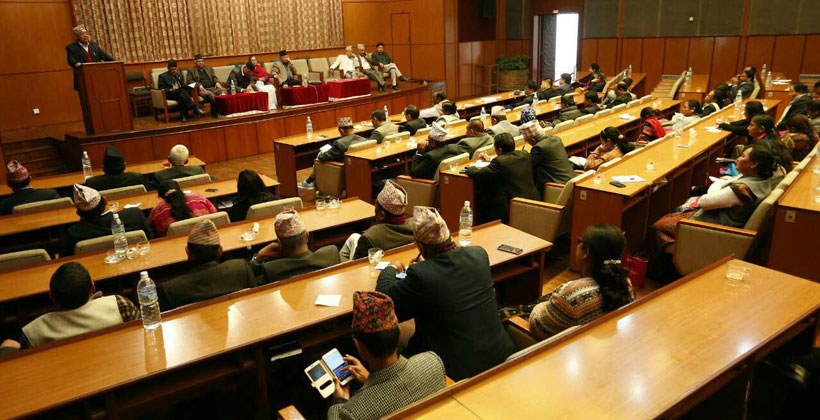 KATHMANDU, Nov 30: The main opposition party, CPN-UML, has decided to use all its energies to foil the proposed amendments to the Constitution, which it has termed an attempt to undermine the sovereign existence of the country.

UML’s parliamentary party meeting held Wednesday decided to act on all three fronts --Parliament, the streets and the courts -- to pile pressure on the government to withdraw the amendment bill that was introduced without consensus with the second largest party in the House.

While UML lawmakers will obstruct parliamentary proceedings starting Thursday, the party and its sister wings are to step up street protests to pile pressure on the ruling parties. The UML also concluded that the government’s move to revise federal province delineations goes against provisions of the Constitution.

The parliamentary party meeting, called a day after the government registered a seven-point amendment bill in Parliament, dwelled on forging the party’s strategy. However, UML Chairman KP Sharma Oli was absent from the meeting due to health reasons.

Addressing the meeting, party Vice Chairman Bam Dev Gautam termed the constitution amendment bill a rehearsal for converting Nepal into another Sikkim, the erstwhile Himalayan kingdom which was forced to surrender its sovereignty to India in the 1970’s. While maintaining that the amendment move was an initial attempt to bring about the disintegration of the country and end its sovereign existence, Gautam emphasized the need to step up protests to foil the amendment.

According to UML lawmaker Rewati Raman Bhandari, the meeting concluded that the amendment bill, which seeks to separate the hill districts from plains districts, was an attempt to eventually bring about the disintegration of Nepal. “The meeting decided to stand strongly against the amendment bill and foil it,” he told Republica.

Also addressing in the meeting, UML Deputy Parliamentary Party leader Subas Nembang said it was unfortunate that the government was bypassing the second largest party in Parliament for the sake of appeasing just eight  percent of the lawmakers in Parliament. Nembang also argued that Article 274 prohibits changing the delineations of the federal provinces.

On Tuesday, the Supreme Court issued a show cause notice to the government in response to a writ petition filed against the move to revise the delineations of federal provinces. “The court has already indicated that this transitional parliament cannot revise provincial boundaries without taking the consent of the respective provincial assemblies.

So, the government’s move to alter provincial boundaries also goes against the Constitution,” UML lawmaker Rishikesh Pokharel quoted Nembang as saying at the meeting.

Although the government has justified the amendment bill on the ground that it would expand the acceptance of the Constitution, the amendment bill has sparked protests not only across the mid-western and western districts but also by various political parties.
Issuing separate press statements, the CP Mainali-led Communist Party of Nepal (Marxist-Leninist), Chitra Bahadur KC-led Rastriya Janamorcha and Narayan Man Bijukchhe-led Nepal Workers Peasants Party have strongly objected to the amendment bill. While alleging that the bill was introduced to appease India, they have also announced they are to launch their own struggles against the ‘anti-national’ and ‘anti-people’ proposal.

Meanwhile, the Mohan Baidya-led CPN (Revolutionary Maoist) has announced its support for protests by the local people in various districts in the mid-western and western districts. The local people are  demanding that Province 5 be left intact.

KATHMANDU, Dec 7: CPN-UML Secretary Gokarna Bista has warned of obstructing the Parliament and protesting in the streets unless the... Read More...