KATHMANDU, March 16: The ruling CPN-UML that was revived by the Supreme Court verdict earlier last week is set to see a formal split with the party's establishment faction issuing threat to take disciplinary action against those attending the national gathering being organized by Madhav Kumar Nepal-led faction in the party.

CPN-UML General Secretary Ishwar Pokharel has directed party leaders and cadres not to attend in the two-day national gathering organized by the Madhav Kumar Nepal-led faction of the party in the capital beginning Wednesday.

Issuing a press statement on Tuesday evening, General Secretary Pokharel directed the party leaders and cadres not to join the factional gathering arguing that the UML  had not organized any natonal gathering.  While stating that the decision of the Nepal-led faction to call national gathering of the party had drawn serious attention, Pokharel also warned of disciplinary action against those attending the 'unauthorized' gathering.

General Secretary Pokharel has asked all concerned not to organize factional gathering against the party's discipline. "The CPN-UML issues special directives to all party leaders and cadres not to attend such indisciplined factional gathering," reads the statement.

Pokharel has warned of disciplinary action against all those defying the party's directives. "Else, it is hereby clarified that further actions will be taken as per the constitution of the country and the provisions in the statutes and regulations of the party and the parliamentary party," the statement reads further.

Earlier on Monday, Prime Minister Oli and senior leader Nepal had held meeting at the party's headquarter in Dhumbarahi to resolve their differences and avoid possible split of the party. Alleging that Chairman Oli had shown no sign of reconcilation, the Nepal-led faction had decided to organize the national gathering of party leaders and cadres as planned before in Lalitpur. 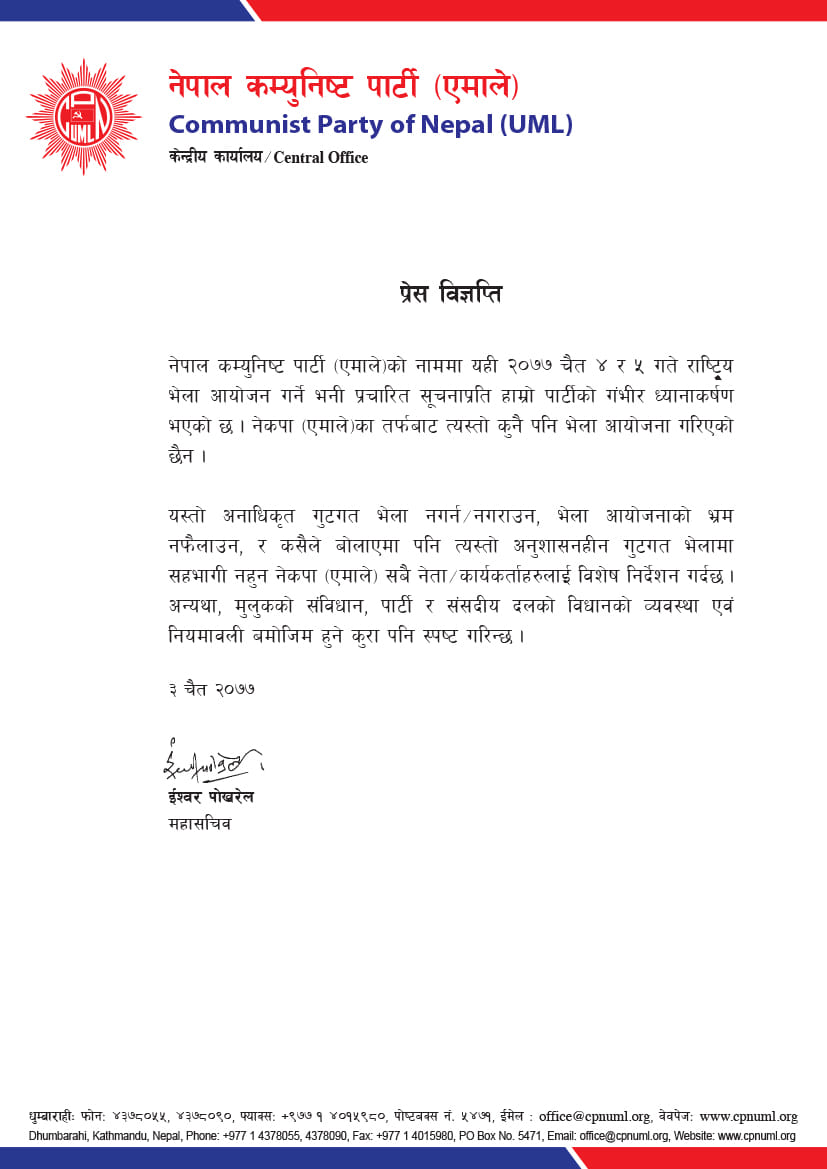 KATHMANDU, March 15: The Madhav Kumar Nepal-led faction of the CPN-UML has decided not to stop the national gathering of... Read More...