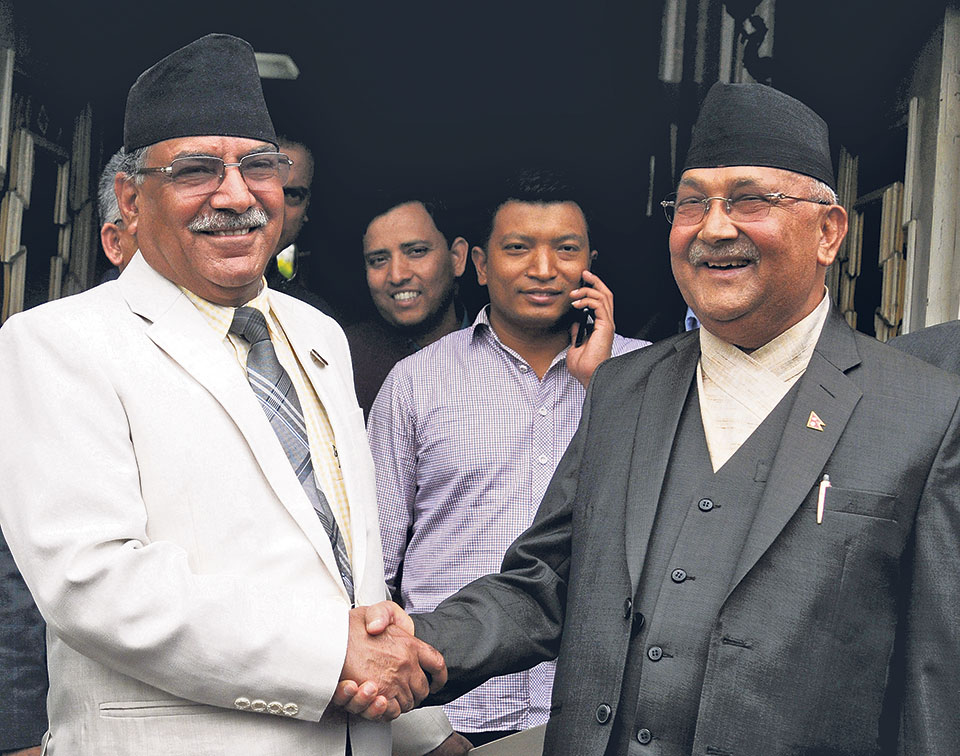 Leaders said Oli and Dahal have successfully resolved disputes on all issues pertaining to the merger.

KATHMANDU, May 17: The ruling CPN-UML and CPN (Maoist Center) have reached a 'breakthrough' in talks aimed at forming a unified communist party, leaders from the two sides said.

After more than two dozen one-on-one meetings, UML Chairman and Prime Minister KP Oli and CPN (Maoist Center) Chairman Pushpa Kamal Dahal on Wednesday ended a long uncertainty over the merger agreeing, in principle, on the modality of power sharing between the two parties.

The leaders would not provide exact details but said that all disputed issues over leadership, organization and ideology have been resolved.

A meeting of the party unification committee would announce the date for official announcement of merger possibly on Thursday, coinciding with the death anniversary of former UML General Secretary Madan Bhandari. The unification is likely to be announced in the next few weeks.

The unification committee meeting, which has been called for Thursday morning, is scheduled to endorse Wednesday's understanding and will give it a written shape.

“To quote the prime minister's words, it is work in progress. We will have to wait until the unification committee meeting to find out exact details of the agreement,” Bihsnu Rimal, Prime Minister Oli's chief political advisor, told Republica.

Leaders said Oli and Dahal have successfully resolved disputes on all issues pertaining to the merger.

On ideological front, the party would be guided by Marxist-Leninist philosophy and adopt "People's Democracy" as the political line. The statute of the new party would give due regard to the "people's war" for its contribution in historical political achievements including secularism and federalism. Leaders said Dahal himself had rewritten the political and ideological document submitted by two task forces formed under UML leader Madhav Nepal and Maoist Center leader Ram Bahadur Thapa Badal.

On the issue of leadership, both Oli and Dahal will have equal strength in the party. Dahal is likely to be nominated consensus chairman of the party after the first general convention.

"The leadership would be nominated based on consensus in the first general convention. This was agreed before the signing of a seven-point agreement between the two parties," said a UML leader.

But some UML leaders including UML senior leader Madhav Kumar Nepal have expressed reservations over this idea.

If the first proposal fails to materialize, the two leaders would rotate both party leadership and premiership. Dahal could lead for the last two years of the five-year tenure.

Hours after the meeting, UML and CPN (Maoist Center) separately held meetings to brief their leaders about the progress made in the talks. Both chairmen had said that they were inching closer to an agreement on unification.

During the signing of the seven-point framework agreement on February 19, leaders of the two parties had given a month's deadline for the merger but it could not happen due to differences over power-sharing and ideological differences between the two parties.

In Pictures: Students take to the streets demanding justice for Sadiksha Chaudhary
49 minutes ago