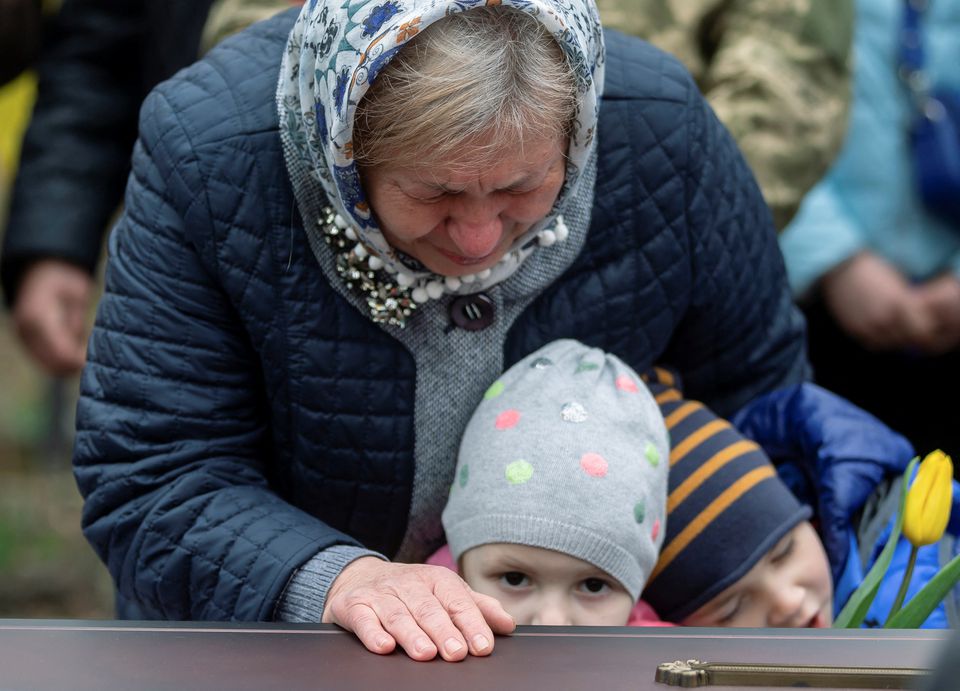 LVIV, March 31: Ukrainian forces are preparing for new Russian attacks in the east of the country as Moscow builds up its troops there after suffering setbacks near the capital Kyiv, President Volodymyr Zelenskiy said on Thursday.

Russia's invasion of its neighbour, now in its fifth week, has driven around a quarter of Ukrainians from their homes and brought Russian-Western tensions to their worst point since the Cold War.

Tough resistance by Ukrainian forces has prevented Russia from capturing any major city, including Kyiv, where a Russian armed column was held back for weeks. At peace talks this week in Istanbul, Russia said it would curtail operations near Kyiv and the northern city of Chernihiv to build trust.

But Ukraine and its Western allies, including the United States, dismissed Russia's pledge as a ploy to stem its losses and prepare for other attacks.

The head of Britain's GCHQ spy service said new intelligence showed some Russian soldiers had refused to carry out orders, sabotaged their own equipment and accidentally shot down one of their own aircraft. read more

In an early morning video address, Zelenskiy referred to Russian troop movements away from Kyiv and Chernihiv and said that was not a withdrawal but rather "the consequence of our defenders' work."

Zelenskiy added that Ukraine is seeing "a build-up of Russian forces for new strikes on the Donbas and we are preparing for that."

The Donbas region encompasses two self-proclaimed "people's republics" that Russia says it is helping to free from Ukrainian control.

The leader of the Donetsk People's Republic, Denis Pushilin, said on Wednesday that offensive operations were intensifying.

Donetsk includes the besieged port city of Mariupol, which has seen some of the war's heaviest fighting and bombardment and where about 170,000 people are trapped with scarce food and water. read more

"We cook what we find among neighbours. A bit of cabbage, a bit more of potatoes, we've found tomato paste, some beetroot," said former steel worker Viktor from Mariupol. They cook using a rudimentary barbecue and sleep in a basement, which he termed their "peaceful oasis."

Russian forces have taken half of the strategic port city, an adviser to Zelenskiy said on Wednesday. Russia's defence ministry said it was prepared to observe a ceasefire in Mariupol on Thursday, Russian news agencies reported.

Russia says it is carrying out a "special operation" to disarm and "denazify" its neighbour. Western countries say Moscow's invasion, the biggest assault on a European country since World War Two, was entirely unprovoked.

The fate of Donbas was discussed at peace talks on Tuesday in Istanbul. A senior Ukrainian negotiator said the talks will resume online on Friday.

Ukraine has sought a ceasefire without compromising on territory or sovereignty, though it has proposed adopting a neutral status in exchange for security guarantees. Russia opposes Ukraine joining the U.S.-led NATO military alliance, and has cited its potential membership as a reason for the invasion.

Western sanctions imposed on Russia as punishment for its invasion have largely isolated its economy from world trade but Moscow is still the biggest supplier of oil and gas to Europe.

The United States is considering releasing up to 180 million barrels of oil over several months from the Strategic Petroleum Reserve (SPR) to ease upward pressure on gasoline prices, two U.S. sources said.

U.S. President Joe Biden will give remarks later on Thursday on efforts to lower gas prices, the White House said.

Seeking to exert its leverage, Russia demanded oil and gas payments be made in roubles by Friday, raising fears of energy shortages and boosting recessionary risks in Europe. Germany has warned of a possible emergency if Russia cuts supplies. read more

Floating a potential compromise, Russian President Vladimir Putin told German Chancellor Olaf Scholz that payments could be made in euros and sent to Gazprombank, which would convert the money to roubles, a German government spokesperson said.

Scholz asked for written information to "better understand the procedure," the spokesperson said.

Gazprombank, one of the main channels for payments for Russian oil and gas, is not subject to EU sanctions.

Global restrictions on exports to Russia over its invasion have shut down a car maker, halted work on tanks, and cut off a Russian computer maker's access to circuits used in communications equipment, a U.S. official said. read more

"Necessity brought together this unprecedented collaboration on export controls and other measures that are having a meaningful impact on Putin's war," said Thea Kendler, an official with the U.S. Commerce Department.

Russia says the West has effectively declared economic war on Russia and so it will now turn eastwards, away from Europe to build a partnership with China.

KYIV, August 17: Russia blamed sabotage for explosions at one of its military bases in Moscow-annexed Crimea while Kyiv hinted... Read More...