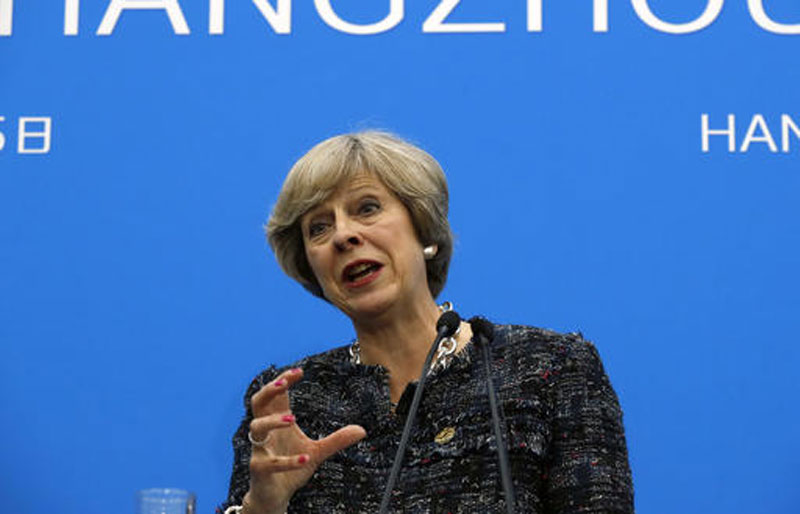 LONDON, Oct 2: U.K. Prime Minister Theresa May said Sunday that Britain would trigger the formal process for leaving the European Union before April, putting to rest weeks of speculation on the timing of the move.

May confirmed her plans in an interview with the BBC ahead of a speech at her Conservative Party's annual conference in Birmingham.

"I will be saying in my speech today that we will trigger before the end of March next year," she said.

While the prime minister previously had hinted she planned to initiate Britain's EU exit early next year, many observers had speculated she would wait until France's presidential election ends in May.

Britain voted in a June referendum to leave the EU, but has not formally notified the bloc of its intentions by invoking the article of the EU treaty that would trigger negotiations. Doing so will launch two years of talks to work out the details of Britain's future relationship with the single market.

While the 2-year timetable is mandated by the EU treaty, it can be extended by a unanimous vote of the remaining members of the bloc.

The prime minister also said she would ask Parliament to repeal the European Communities Act, which automatically makes EU rules the law of the land in Britain.

May said her government instead would incorporate all EU laws into British law and then repeal measures as necessary on a case-by-case basis.

"That means that the United Kingdom will be an independent, sovereign nation," she said. "It will be making its own laws."

May said that by offering a timetable now, she hopes to encourage the two sides to engage in preliminary work that would help the negotiations go smoothly once they begin. EU leaders so far have rejected any such discussions.

One of the biggest sticking points in any talks will be immigration. The free movement of labor is a founding principle of the EU, and millions of EU citizens live and work in Britain.

The perception that immigrants have strained public services and changed the face of many communities was a factor for many British citizens who voted to leave the EU. May said she intends to heed public opinion on that point.

"Apart from the message of leaving the European Union, I think there was also a clear message from the British people that they wanted us to control movement of people from the EU coming into the UK, so we will deliver on that," she said.

Nepse increases slightly by 4.62 points, while daily turnover drops as low as Rs 1.474 billion on Monday
35 minutes ago