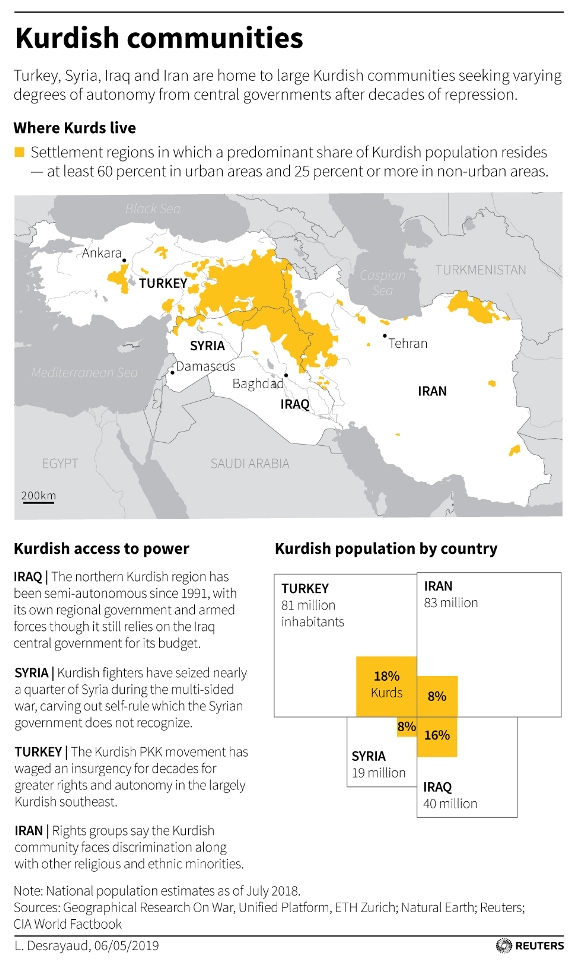 ISTANBUL, Oct 7: The United States began pulling troops back from the northeast Syria border on Monday, opening the way for a Turkish strike on Kurdish-led forces long allied to Washington, in a move U.S. President Donald Trump hailed as a bid to quit “endless wars”.

The major policy shift, which hands Turkey responsibility for thousands of jihadist prisoners, was denounced as a “stab in the back” by Kurdish-led forces who have been Washington’s most capable partner in fighting Islamic State in Syria.

The forces, known as the Syrian Democratic Forces (SDF), accused Washington of reneging on an ally, warning it would have a “great negative” impact on the war against the militants.

The initiative also runs counter to the positions of even some of Trump’s top allies in his own Republican Party. Lindsey Graham, a Republican senator who is generally a vocal Trump supporter, criticized the move as impulsive.

But Trump said in several Tweets it was too costly to keep supporting Kurdish-led forces fighting Islamic State, adding “it is time for us to get out of these ridiculous Endless Wars”.

“Turkey, Europe, Syria, Iran, Iraq, Russia and the Kurds will now have to figure the situation out,” he said.

In a sign of deepening humanitarian concern, a U.N. official reacted to the move by saying civilians must be spared in any Turkish operation in the northeast, adding the United Nations hoped that displacement and atrocities can be prevented.

“We are hoping for the best but preparing for the worst,” Panos Moumtzis, U.N. regional humanitarian coordinator for the Syria crisis, told reporters in Geneva.

A U.S. official said American troops had withdrawn from two observation posts on the border, at Tel Abyad and Ras al-Ain, and had told the commander of the SDF that the United States would not defend the SDF from an imminent Turkish offensive. U.S. troops elsewhere in Syria remain in position.

The pullback will initially be limited in scope to a patch of territory near the Turkish border where both countries had been working to establish a special security area, another U.S. official told Reuters on Monday.

The official, who spoke to Reuters on condition of anonymity, did not say whether the troops would leave the country or reposition elsewhere in Syria, where the United States has around 1,000 forces.

A third U.S. official said any unilateral Turkish military offensive in Syria was a “bad idea” and the United States “will not help it in any way, but will also not resist it”.

In a statement after Trump spoke to Turkish President Tayyip Erdogan on Sunday, the White House also stressed that U.S. troops would not support the operation. “United States forces, having defeated the ISIS territorial “Caliphate”, will no longer be in the immediate area,” it said.

Erdogan said U.S. troops had started to withdraw from parts of northeast Syria after his call with Trump. He said he planned to visit Washington to meet Trump in the first half of November where they would discuss plans for the “safe zone”.

Turkey has long argued for the establishment of a 20-mile (32 km) “safe zone” along the border, under Turkish control, driving back the Syrian Kurdish YPG militia - which is the dominant force in the SDF alliance and which Ankara considers a terrorist organization and a threat to its national security.

The United States helped the YPG defeat Islamic State militants in Syria, and had been seeking a joint ‘security mechanism’ with Turkey along the border to meet Turkey’s security needs without threatening the SDF.

The SDF accused Washington of betraying its ally.

“But the (U.S.) statement today was a surprise and we can say that it is a stab in the back for the SDF,” SDF spokesman Kino Gabriel said in an interview with al-Hadath TV.

Trump ally Graham called for the withdrawal to be reversed.

“It’s never in our national security interest to abandon an ally who’s helped us fight ISIS,” Graham said in an interview with Fox News Channel, using an acronym for Islamic State.

“This impulsive decision by the president has undone all the gains we’ve made, thrown the region into further chaos.”

A Turkish official later said the U.S. withdrawal could take one week, and Turkey would likely wait until it had been completed before launching an offensive.

The statement made pointed reference to Washington’s European allies, saying many captured IS fighters came from those nations, which had resisted U.S. calls to take them back.

France called on Turkey to avoid any actions that could go against the interests of the anti-Islamic State coalition, adding militants held in northeast Syria, including foreigners, should be tried where their crimes were committed.

However the Kremlin, the strongest foreign ally of Syrian President Bashar al-Assad, said Syria’s territorial integrity had to be preserved and Moscow continued to seek the withdrawal of all foreign forces illegally present in Syria.

Turkey says it wants to settle up to 2 million Syrian refugees in the zone. It hosts 3.6 million Syrians sheltering from their country’s more than eight-year-old conflict.

Turkey's lira TRYTOM=D3 weakened on Monday to touch 5.797 to the dollar, its weakest level in just over one month, over concerns about a unilateral Turkish operation in Syria.

The Turkish presidency said that during the call between Erdogan and Trump, Erdogan had expressed his frustration with the failure of U.S. military and security officials to implement the agreement between the two countries on a safe zone.

The NATO allies agreed in August to establish a zone in northeast Syria along the Turkish border. Turkey says the United States moved too slowly to set up the zone. It has repeatedly warned of starting an offensive on its own into northeast Syria.

BEIRUT/ANKARA, Oct 21:The Kurdish-led Syrian Democratic Forces (SDF) on Sunday said they had withdrawn from the border town of Ras... Read More...

Juggling between work and family life, working parents play the double role even in this time of pandemic
26 minutes ago
Entrepreneurs set various preconditions to resume public transportation
49 minutes ago