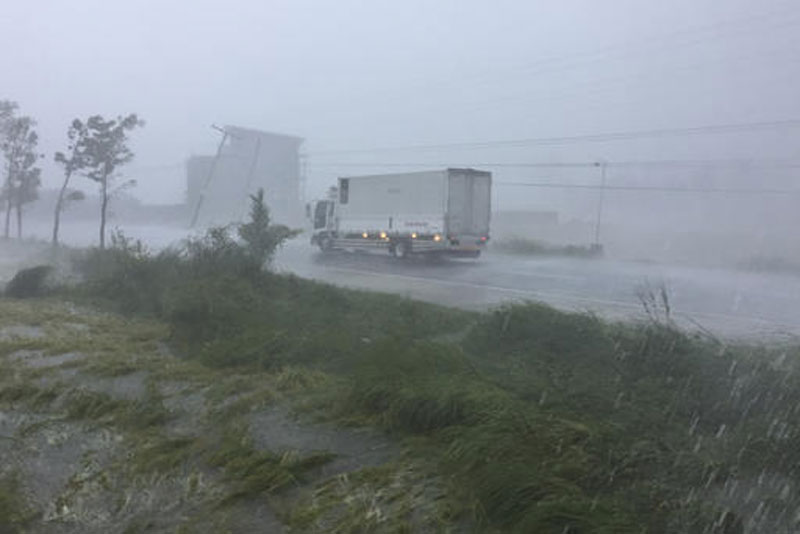 VIGAN, Oct 20: At least five people were killed after Super Typhoon Haima smashed into the northern Philippines with ferocious winds and rains overnight, flooding towns and forcing thousands to flee before weakening Thursday and blowing into the South China Sea, officials said.

Haima's blinding winds and rain had rekindled fears and memories from the catastrophe wrought by Typhoon Haiyan in 2013, but there were no immediate reports of any major damage amid faulty communications and power outages in several villages cut off from government aid and rescue teams by fallen trees, landslide and flood.

Nearly 100,000 villagers were evacuated from high-risk communities as the typhoon approached, helping prevent a larger number of casualties.

Two construction workers died, however, when a landslide buried their shanty in La Trinidad town in the mountain province of Benguet, officials said, while two villagers drowned in floodwaters and another is missing in Ifugao province, near Benguet. A 70-year-old man died apparently of a heart attack while being brought to an emergency shelter from a flooded neighborhood in Isabela province, officials said.

Although storms are a part of life in the country's north, many villagers were still horrified by Haima's fury.

"In my age, I'm 60 years old, this is the strongest typhoon I have ever seen," village councilor Willie Cabalteja told The Associated Press in Vigan city in Ilocos Sur province. "We haven't slept. Trees were forced down, houses lost their roofs and fences and metal sheets were flying around all night."

The fast-moving Pacific typhoon slammed into shore in northeastern Cagayan province late Wednesday then barreled northwestward before blowing out into the South China Sea with sustained winds of 150 kilometers (93 miles) per hour and gusts of up to 185 kph (115 mph), according to forecasters.

Although weakening, the typhoon was expected to blow toward China, Filipino forecasters said.

After dawn, the extent of damage in Cagayan — about 500 kilometers (310 miles) north of Manila — and nearby regions became evident, with overturned vans, toppled or leaning electric posts and debris blocking roads. Most stores, their window panes shattered and canopies shredded by the wind, were close.

The government's weather agency lowered most of its storm warnings after the typhoon blew out of the main northern Luzon region.

Many of the provinces hit by the storm were still recovering from a powerful typhoon that killed two people and displaced tens of thousands of villagers last weekend.

Philippine President Rodrigo Duterte, on a state visit to China, urged people in the typhoon's path to heed orders by disaster agencies. Duterte is to fly home Friday.

About 20 typhoons and storms lash the Philippines each year, adding to the many burdens in a country that is also threatened by earthquakes and volcanic eruptions and considered one of the world's most disaster-prone nations.

In November 2013, Typhoon Haiyan struck the central Philippines with ferocious power, leaving more than 7,300 people dead and displacing more than 5 million others after leveling entire villages.