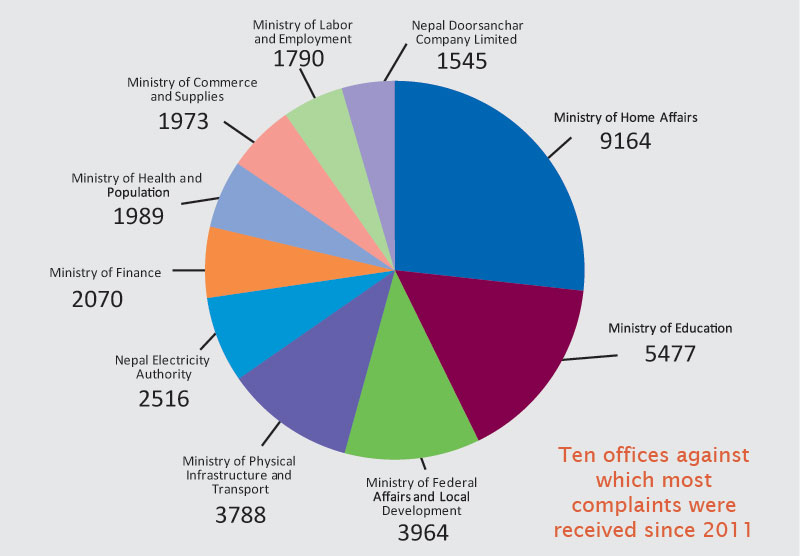 9,164 complaints about Home Ministry
KATHMANDU, Nov 8: Social media has reversed the trend of public complaints registered at Hello Sarkar, a popular government desk that receives grievances from the general public both within and outside the country.

The number of complaints received at the desk, which has been run by the Prime Minister's Office (PMO) at Singha Durbar since the last five years, had been steadily declining.

In the first year of its inception in November 2011, the desk received altogether 17,039 complaints. Since then, the trend of filing complaints at the desk was  decreasing continuously till a year ago.

The scenario changed dramatically when the PMO started using social media such as Facebook and Twitter. The desk started to use its separate Facebook page since last December-end and Twitter since the last seven months.

The number of incoming complaints then spiked suddenly.

With this, the total number of complaints received through social media, phone and fax, among other means, has reached 13,080 during the last 12 months.

“It has made it easy for the public to access the government desk and this has increased the number of complaints sent in,” Rupak Aryal, section officer at the desk, told Republica. “People have preferred social media because the desk can respond more quickly than through other means.”

The desk has so far received altogether 53,540 complaints through various mediums. Complaints have been registered against 46 government entities.

Public complaints registered against MoHA are related mainly to the issuance of citizenship certificates and passports. Other complaints deal with matters such as cheating and fraud.

“Every year Hello Sarkar has been receiving the highest number of complaints against home ministry-related   services,” said Aryal. “The ministry has addressed 95 per cent of the complaints registered against it.”

The Ministry of Education has been the target of 5,477 complaints, the second highest among government bodies.

According to Aryal, about 82 percent of the 53,540 complaints have been addressed so far by the concerned bodies.

“After we receive the complaints, we forward them to the concerned bodies,” he further informed. “The bodies also update us about how they have addressed the public complaints forwarded to them.”

Then prime minister Baburam Bhattarai had initiated Hello Sarkar as a section under the Prime Minister's Office at Singha Durbar in 2011.

Officers at Hello Sarkar in risk of hearing impairment

KATHMANDU, July 14 : Continuous exposure to sound has led to various kinds of hearing and psychological problems among the officials... Read More...

Twitter announced Monday it was easing its 140-character limit on tweets, in the latest effort to broaden the appeal and... Read More...