Tumbahangphe fights back against patriarchy in party 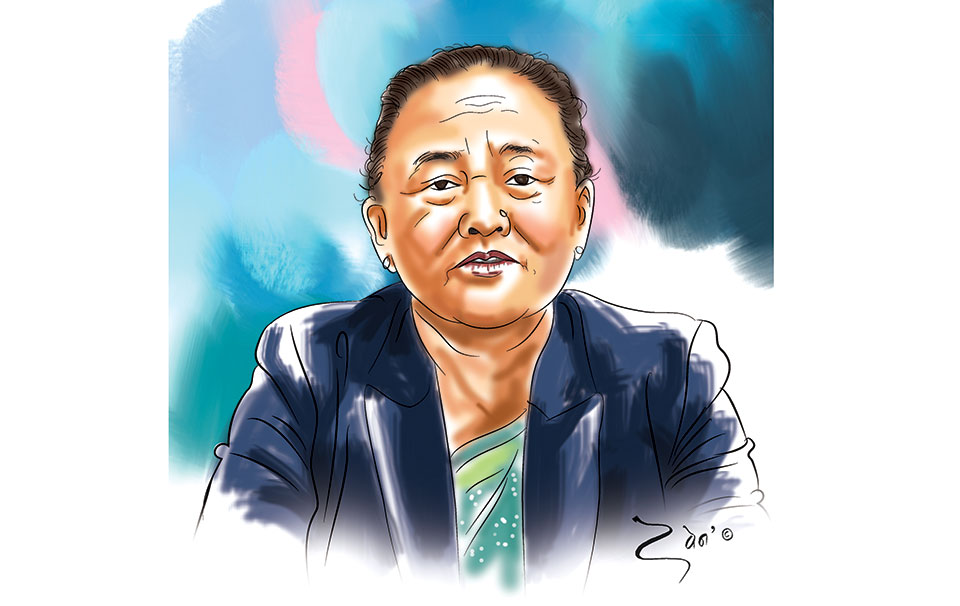 KATHMANDU, Jan 13: Top leaders of the ruling Nepal Communist Party (NCP) had barely expected that deputy speaker Shivamaya Tumbahangphe would fight back against her party’s decision to force her to resign.

A meeting of the party secretariat, a top body of the party, on Saturday had urged her to resign from deputy speaker and pave the way for the election of a new speaker. But she strongly objected to the decision and the party leaders now appear to have no clue how to break through the impasse.

A day after a formal request by the party’s top body asking her to resign, deputy speaker Tumbahangphe was summoned to Baluwatar by the party’s chairmen-duo -- KP Oli and Pushpa Kamal Dahal.

During her second meeting with chairman-duo within three days, her message was loud and clear: “I won’t resign if the party is not ready to field me as House speaker.”

Her firm claim to the speakership has forced the party to delay the parliament meeting thrice in a month. The speaker’s position is lying vacant for the last three months following the resignation of then speaker Krishna Bahadur Mahara after he was accused of raping a woman staffer in the parliament.

The ruling party wants to appoint someone else to the post of speaker. The row has largely affected the speaker election process. Running out of options, the parliamentary meeting scheduled for Sunday has been deferred for a week.

Those familiar with Tumbahangphe say she is not easy to deal with when it comes to issues related to rights and women representatives. They believe she will not surrender easily. “She has a long background of fighting for women’s rights,” said women rights activist Sharmila Karki adding, “She is not giving up.”

Tumbahangphe has been consistently stating that she shouldn’t be victimized for someone else’s crimes. A large group of second-rung leaders in the party, women rights activists, civil society members and many in social media have come out in her support.

“The sister [Tumbahangphe] joined politics in 1979 when I was secretary of Mechi Zonal Committee. It would be good if leaders don’t decide otherwise,” leader NCP Pradip Nepal wrote on his Facebook.

Born in Morang of eastern Nepal in 1964, Tumbahangphe worked in the party’s student, youth and women’s organizations, taught in colleges and advocated for gender equality in national and international organizations.

Her PhD dissertation was on ‘Political Women Movement in Nepal’. She has been involved in campaigns aimed at promoting the rights of women and indigenous nationalities.

She had joined student politics in the late 1970s and was elected treasurer of the Free Students’ Union of Nepal Law Campus representing the All Nepal National Free Student Union (ANNFSU), a sister organization of then Communist Party of Nepal (Marxist-Leninist), in 1986.

In 1994, she was elected as vice-president of ANNFSU.

Despite her long involvement in party politics she became widely known only after her election as member of parliament in 2017 under the proportional electoral system. She was subsequently elected to deputy speaker.

Arguing that she was elected under a proportional representation system, some male leaders in the party are not in favor of her leading the parliament. But she appears determined not to give up her claim to the coveted post.

During her nearly three years’ stay in parliament as deputy chief of parliament she was not influential in politics as speaker Mahara himself would steer the parliament single-handedly.

In a bid to settle the speaker candidate row, Prime Minister KP Oli has promised her the post of law minister if she stepped down as deputy speaker. Another senior leader Jhalanath Khanal has warned of serious consequences if she disobeyed the party. But she is unimpressed by the offer and unfazed by the warning. On Sunday also, she continued her claim to the speaker’s post.

“I will not resign. I will run the parliament in the capacity of deputy speaker,” she reportedly told Oli and Dahal at Sunday’s meeting.

KATHMANDU, Jan 12: More than three months after then speaker of the House of Representatives  Krishna Bahadur Mahara resigned from... Read More...