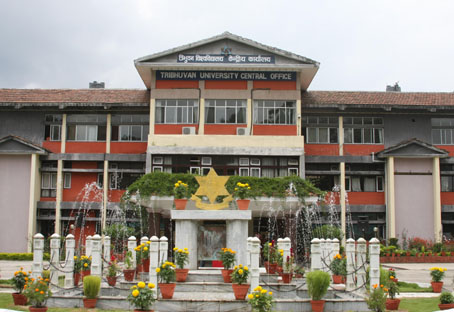 CHITWAN, June 28: With the widening rift between Agriculture and Forestry University (AFU) and Tribhuvan University (TU) on land, AFU's bid to construct its building at Forestry Campus, Hetauda, Makawanpur, has adjourned.

The AFU had initiated the construction of the educational building by laying the foundation stone for this amidst a program on June 24. Dormani Poudel, Chief Minister of State-3 government had laid the foundation stone of the building. Prof Dr Iswari Prasad Dhakal, AFU vice-chancellor, said TU has stopped the construction of building though it was put forward as per the agreement between both the universities.

Prof Dhakal informed that they initiated construction works in line with the report of a team comprising registrars of both the universities and TU senate decision to provide AFU with land nearby road. He further informed that the Council of Ministers had decided to allow TU to build engineering college in 40 bigha and 19 kaththa land among 338 bigha of Rampur and provide 60 bigha out of 158 bigha of Hetauda to AFU.

"The decision was not to arrange land for AFU nearby road but to provide land to AFU with path outlet Noting that TU is ready to go with government and senate decisions, Prof Khaniya said the AFU should also comply with the decisions. AFU has initiated the construction of building in the area at the cost of Rs 988 million.

KATHMANDU, Aug 26: As the position of vice-chancellor (VC) at Tribhuvan University (TU), the largest and oldest university of the country,... Read More...