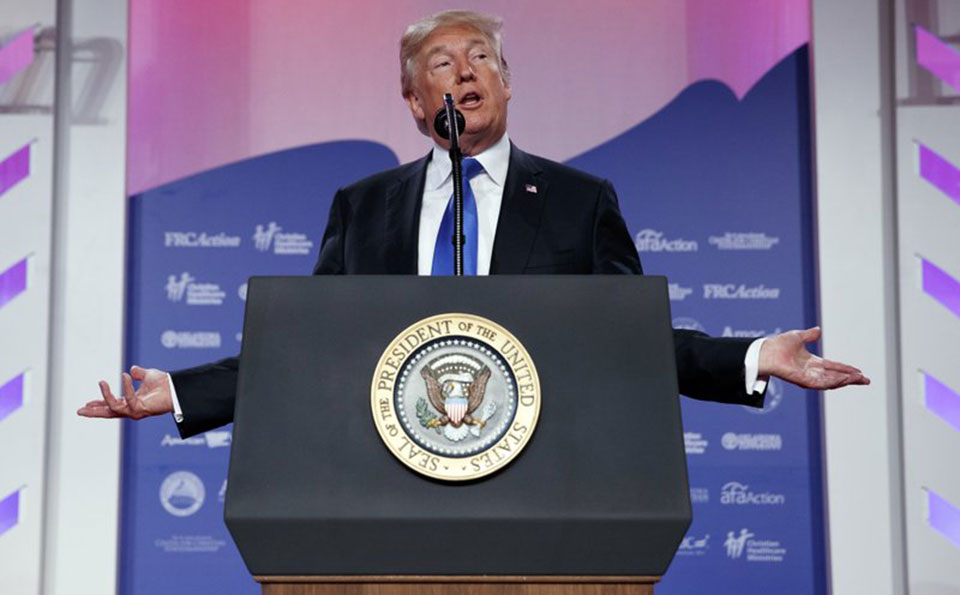 Defiant Democrats, convinced they have important leverage, promised to press for a bipartisan deal to restore the money by year’s end. That drive could split the GOP. On one side: pragmatists seeking to avoid political damage from hurting consumers. On the other: conservatives demanding a major weakening of the Affordable Care Act as the price for returning the money.

“The American people will know exactly where to place the blame,” declared Senate Minority Leader Chuck Schumer, D-N.Y., all but daring Trump to aggravate what could be a major issue in the 2018 congressional elections.

The money goes to companies for lowering out-of-pocket costs like co-payments and deductibles for low- and middle-income customers. It will cost about $7 billion this year and help more than 6 million people.

Ending the payments would affect insurers because President Barack Obama’s law requires them to reduce their poorer customers’ costs. Carriers are likely to recoup the lost money by increasing 2018 premiums for people buying their own health insurance policies.

The National Association of Insurance Commissioners estimates that Trump’s move would produce a 12 percent to 15 percent upsurge in premiums, while the nonpartisan Congressional Budget Office has put the figure at 20 percent. That’s on top of premium increases from growing medical costs.

Experts say the political instability over Trump’s effort to undermine Obama’s health care law could also prompt more insurers to leave markets. As Trump frequently points out, next year about half of U.S. counties will have only one insurer on “Obamacare’s” online marketplaces, up from the one-third of counties with one carrier in 2017.

Trump relished his latest blow against the law that he pledged to repeal during his presidential campaign, only to see the effort crash in the GOP-run Senate this summer. He’s long derided the subsidies as bailouts to insurers, even though the payments and the cost reductions for consumers are required by law.

The scrapping of subsidies would affect millions more consumers in states won by Trump last year, including Florida, Alabama and Mississippi, than in states won by Democrat Hillary Clinton. Nearly 70 percent of the 6 million who benefit from the cost-sharing subsidies are in states that voted for the Republican.

“Congress, they forgot what their pledges were,” Trump told conservative activists at the Values Voter Summit on Friday, recalling GOP candidates’ repeated vows to repeal Obama’s law. “So we’re going a little different route. But you know what? In the end, it’s going to be just as effective, and maybe it will even be better.”

He later reiterated his belief that his move would pressure Democrats to bargain over major changes in the law and said, “There’s going to be time to negotiate health care that’s going to be good for everybody.”

Trump’s move was hailed by conservative groups including Heritage Action for America and Freedom Partners, backed by the Koch brothers.

But rallying against it were medical and consumer groups including the American Heart Association, the American College of Physicians and insurance industry behemoths America’s Health Insurance Plans and Blue Cross Blue Shield Association.

Nineteen Democratic state attorneys general are suing Trump over the stoppage. Attorneys generals from California, Kentucky, Massachusetts and New York were among those who filed the lawsuit in federal court in California to stop Trump’s attempt “to gut the health and well-being of our country.”

A federal judge has found that Congress never properly approved the payments. The subsidies have continued under Obama and Trump until now, despite prior Trump threats to block them.

Schumer told reporters that Trump’s “threats and bullying are not going to work.” He said he saw a good chance of forcing money for the cost-sharing reductions into a massive spending bill Congress is expected to approve late this year.

Democrats think Trump would have little clout to block a bipartisan deal, citing support for the payments by some Republicans and polls showing the public would fault the GOP for any failure. Some Republicans privately agree.

In a survey released Friday by the nonpartisan Kaiser Family Foundation, 7 in 10 said the administration should help Obama’s law work, not undermine it, including nearly half of Republicans. The same group conducted an August poll showing 6 in 10 people would blame Trump and the GOP for future health care woes.

Sens. Lamar Alexander, R-Tenn., and Patty Murray, D-Wash., have been seeking a deal that Alexander said in a recent interview would reinstate the payments for two years. He said in exchange, Republicans want “meaningful flexibility for states” to offer lower-cost insurance policies with less coverage than Obama’s law mandates.

Republicans are divided over that effort.

Rep. Mark Meadows, R-N.C., who leads the conservative House Freedom Caucus, said in an interview that he’s willing to back the payments if they’re “part of a transition from Obamacare to something else” with greater state flexibility than Alexander and Murray are discussing. Another conservative leader, Rep. Mark Walker, R-N.C., said “under no circumstance” should the payments be revived.

Some GOP leaders have expressed openness to continuing the payments, including Senate Majority Leader Mitch McConnell, R-Ky., who’s said he wants them accompanied by significant changes. House Ways and Means Committee Chairman Kevin Brady, R-Texas, said this summer that the payments should be continued, citing their impact on premiums.

Moderates like Sen. Susan Collins, R-Maine, said Friday that halting the payments would make insurance costs “unaffordable for some people.” Rep. Ileana Ros-Lehtinen, R-Fla., tweeted that the cuts “will mean more uninsured in my district.”

LAHAN, Dec 4: “There is quota, but no doctor. There is income, but no expenditure. There are tools but no use.”... Read More...