Trump to black voters: 'What the hell do you have to lose?' 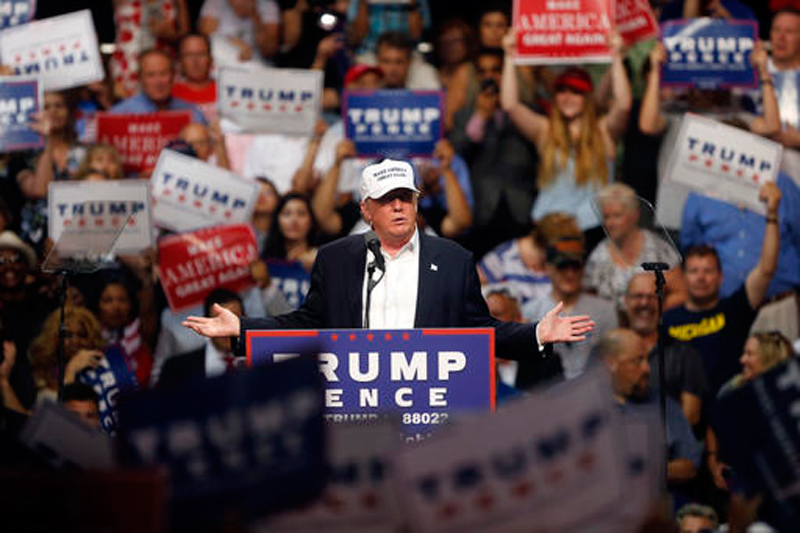 DIMONDALE, Aug 20: Republican Donald Trump again made a direct appeal to black voters Friday night, urging them to abandon the Democratic Party and give him a chance.

Speaking at a rally in Dimondale, Michigan, an overwhelmingly white suburb outside of Lansing, the GOP nominee argued that Democrats, including his rival Hillary Clinton, have taken advantage of African-American voters and taken their votes for granted.

"Tonight, I'm asking for the vote of every single African-American citizen in this country who wants to see a better future," Trump told the crowd.

He also made a bold prediction: "At the end of four years, I guarantee you that I will get over  95 percent of the African-American vote. I promise you."

But Trump once again accused Clinton of "bigotry," claiming she sees African-Americans "only as votes, not as human beings worthy of a better future,"

And he painted a dismal role of life for African-Americans in the workforce, declaring that, in cities like Detroit, they "have become refugees in their own country."

On Twitter, the Clinton campaign responded, "This is so ignorant it's staggering."

The Clinton campaign's Marlon Marshall added in a statement: "Donald Trump asks what the African-American community has to lose by voting for him. The answer is everything from a man who questions the citizenship of the first African-American President, courts white supremacists, and has been sued for housing discrimination against communities of color."

Marshall said, "Trump painting the entire community as living in poverty with no jobs continues to show he is completely out of touch with the African-American community."