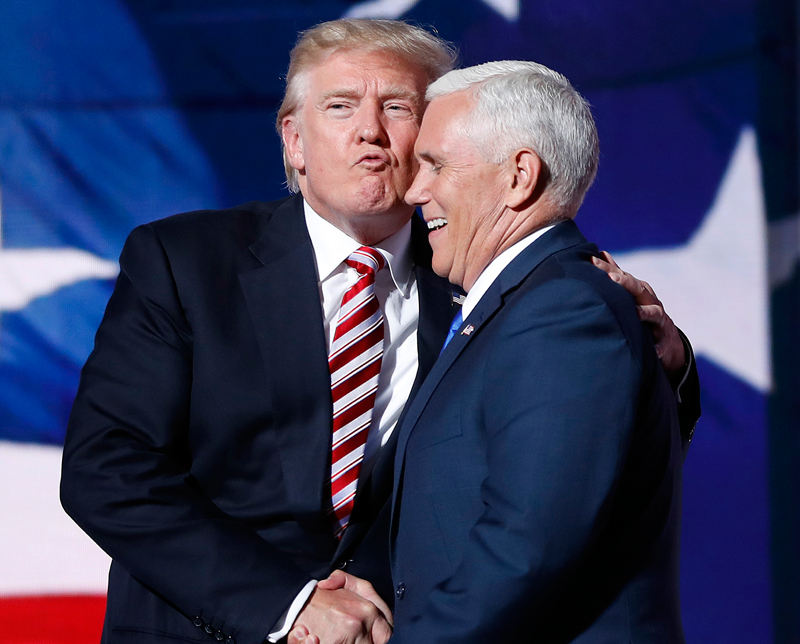 CLEVELAND, July 22: Donald Trump accepted the Republican nomination for president Thursday, promising anxious Americans that they will be safer and richer if he is elected in November.

Trump painted a dire state of affairs in the United States and the world — instability abroad and crumbling infrastructure at home — and blamed those problems on President Barack Obama and his former secretary of state, presumptive Democratic nominee Hillary Clinton.

"This is the legacy of Hillary Clinton," he said. "Death, destruction, terrorism and weakness."

Closing the four-day convention in Cleveland, Trump pledged that as president he'll end crime and violence around the country, and said he would speak for those who don't feel they are heard by government.

The billionaire businessman, 70, was looking to win over skeptics in his party. Republican disunity was on display the previous night when Trump's primary rival, Ted Cruz, stopped far short of endorsing Trump and drew loud boos.

What to know about Trump's speech and the final night of the convention:

In an appeal to Americans shaken by violence at home and around the world, Trump promised that under his presidency, "safety will be restored."

He stuck to the controversial proposals of his primary campaign, including building a wall along the entire U.S.-Mexico border and suspending immigration from nations "compromised by terrorism."

But in a nod to a broader swath of Americans voting in November, he vowed to protect gays and lesbians from violence and oppression, and said he would ensure that young people in predominantly black cities "have as much of a right to live out their dreams as any other child in America."

In typical Trump fashion, he cast himself as the only one who could solve America's problems.

"No one knows the system better than me," he said. "That's why I can fix it."

Still, he set aside much of his usual bravado. As the crowd, fiercely opposed to Clinton, broke out in its oft-used chant, "Lock her up," he waved them off, and declared, "Let's defeat her in November."

He was introduced by his daughter Ivanka, who announced a childcare policy proposal that the campaign had not mentioned before.

"He will focus on making quality childcare affordable and accessible for all," she said.

Trump said he will overhaul tax laws and energy rules, get rid of regulations and decrease taxes, while offering few specifics. He said he will not sign "bad" trade agreements.

"I have made billions of dollars in business making deals — now I'm going to make our country rich again," he said.

In his speech, Trump did not repeat comments made to The New York Times that the United States might abandon its NATO military commitments if he were president.

Leading Republicans and world leaders reacted swiftly Thursday after the comments were published. Senate Majority Leader Mitch McConnell told CNN that he "totally" disagrees with Trump's suggestion that U.S. support could be conditional. In Brussels, NATO Secretary-General Jens Stoltenberg said the alliance agreement was crystal clear: "We defend each other."

Cruz did not back down from his non-endorsement Thursday, telling his home-state delegation he won't vote for Clinton, but making no promise to endorse Trump.

"I'll be watching and listening," Cruz said, but added: "I won't sit down, shut up, and support the team."

TURNING TO THE DEMOCRATS

Virginia Sen. Tim Kaine has emerged as the leading contender to join the Democratic ticket as Clinton's running mate, according to two Democrats, who both cautioned that Clinton has not made a final decision and could yet change directions.

The announcement of Clinton's pick could come as early as Friday in Florida, a crucial general election battleground state. The timing is aimed at shifting attention away from the end of Donald Trump's Republican convention and generating excitement before the start of Clinton's own convention next week in Philadelphia.

Trump is now president, but he still sees himself as leading an insurgency

Donald Trump took over as U.S. president on Friday in the same way he conducted his upstart campaign, with a... Read More...