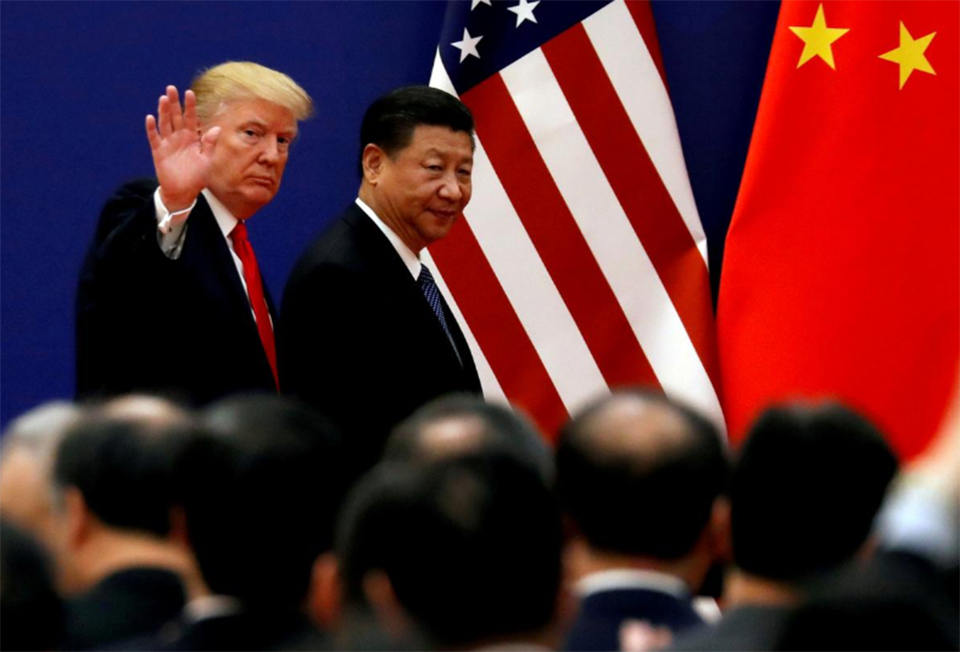 The announcement on Thursday extends Trump’s trade tariffs to nearly all China’s imports into the United States and marks an abrupt end to a temporary truce in a trade row that has hurt world growth and disrupted global supply chains.

Trump made the announcement in a series of Twitter posts after his top trade negotiators briefed him on a lack of progress in U.S.-China talks in Shanghai this week.

Trump later said if trade negotiations fail to progress he could raise tariffs further - even beyond the 25 percent levy he has already imposed on $250 billion of imports from China.

Asked about the impact on financial markets, Trump told reporters: “I’m not concerned about that at all.”

Moody’s said the new tariffs would weigh on the global economy at a time when growth is already slowing in the United States, China and the euro zone.

The tariffs may also force the Federal Reserve to again cut interest rates to protect the U.S. economy from trade-policy risks, experts said.

Raising tariffs would lower the prospects of a deal rather than expedite it, China’s Global Times newspaper said. Beijing would focus more on efforts to survive a prolonged trade war, Hu Xijin, editor-in-chief of the Communist Party-backed newspaper, said on Twitter.

“New tariffs will by no means bring closer a deal that the U.S. wants; it will only make it further away,” Hu said.

Possible retaliatory measures by China could include tariffs, a ban on the export of rare earths and penalties against U.S. companies in China.

So far, Beijing has refrained from slapping tariffs on U.S. crude oil and big aircraft, after cumulatively imposing additional retaliatory tariffs of up to 25% on about $110 billion of U.S. goods since the trade war broke out last year.

China is also drafting a list of “unreliable entities” - foreign firms that have harmed Chinese interests. U.S. delivery giant FedEx is under investigation by China.

“China will deliver each retaliation methodically, and deliberately, one by one,” ING economist Iris Pang wrote in a note.

“We believe China’s strategy in this trade war escalation will be to slow down the pace of negotiation and tit-for-tat retaliation. This could lengthen the process of retaliation until the upcoming U.S. presidential election,” Pang said.

U.S. Trade Representative Robert Lighthizer and Treasury Secretary Steven Mnuchin briefed Trump on their first face-to-face meeting with Chinese officials since Trump met Xi at the G20 summit at the end of June and agreed to a ceasefire in the trade war.

“When my people came home, they said, ‘We’re talking. We have another meeting in early September.’ I said, ‘That’s fine, but until such time as there’s a deal, we’ll be taxing them,” Trump told reporters.

A source familiar with the matter said Trump grew frustrated and composed the tweets shortly after Lighthizer and Mnuchin told him China made no significant movement on its position.

Previous negotiations collapsed in May, when U.S. officials accused China of backing away from earlier commitments.

American business groups in China expressed disquiet over the latest round of U.S. tariffs. The U.S.-China Business Council said on Friday it was concerned the action “will drive the Chinese from the negotiating table, reducing hope raised by a second round of talks that ended this week in Shanghai.”

“We are particularly concerned about increased regulatory scrutiny, delays in licenses and approvals, and discrimination against U.S. companies in government procurement tenders,” said the U.S.-China Business Council’s President Craig Allen in an e-mail.

Ker Gibbs, the president of the American Chamber of Commerce in Shanghai, urged both sides to keep talking.

Gibbs said that as market access in China “remains unnecessarily restricted,” the United States should continue its dialogue with Beijing, and “also work with like-minded countries to persuade China that fair and reciprocal trade and investment benefits all.”

Trump said Beijing had failed to stop sales of the synthetic opioid fentanyl to the United States, as it had promised to do. He also said Beijing had not fulfilled a goodwill pledge to buy more U.S. agricultural products.

Trump has failed to make good on a goodwill gesture he said he would make after the G20 meeting to relax restrictions on sales to Chinese telecommunications giant Huawei.

Trump had been pressing Xi to crack down on a flood of fentanyl and fentanyl-related substances from China, which U.S. officials say is the main source of a drug blamed for most of more than 28,000 synthetic opioid-related overdose deaths in the United States in 2017.

China had pledged that from May 1 it would expand the list of narcotics subject to state control to include the more than 1,400 known fentanyl analogues, which have a slightly different chemical makeup but are addictive and potentially deadly, as well as any new ones developed in the future.

The U.S. Department of Agriculture on Thursday confirmed a small private sale to China of 68,000 tonnes of soybeans in the week ended July 25.

It was the first sale to a private buyer since Beijing offered to exempt five crushers from the 25% import tariffs imposed more than a year ago. Soybean futures opened lower on Thursday as traders shrugged off the purchase because of the small volume involved, and losses accelerated after Trump’s tweets.

The new tariffs will jack up prices for consumers at the start of the back-to-school buying season, four large retail trade associations said on Thursday.

“President Trump is, in effect, using American families as a hostage in his trade war negotiations,” said Matt Priest, president of the Footwear Distributors and Retailers of America.

Stephen Lamar, executive vice president of the American Apparel & Footwear Association, said his group’s members were shocked that Trump had not allowed the resumed U.S.-China trade talks to proceed further before acting.

The measure will hit U.S. consumers far harder than Chinese manufacturers, who produce 42% of apparel and 69% of footwear purchased in the United States, Lamar said.

BEIJING, May 15: China is running out of options to hit back at the United States without hurting its own... Read More...