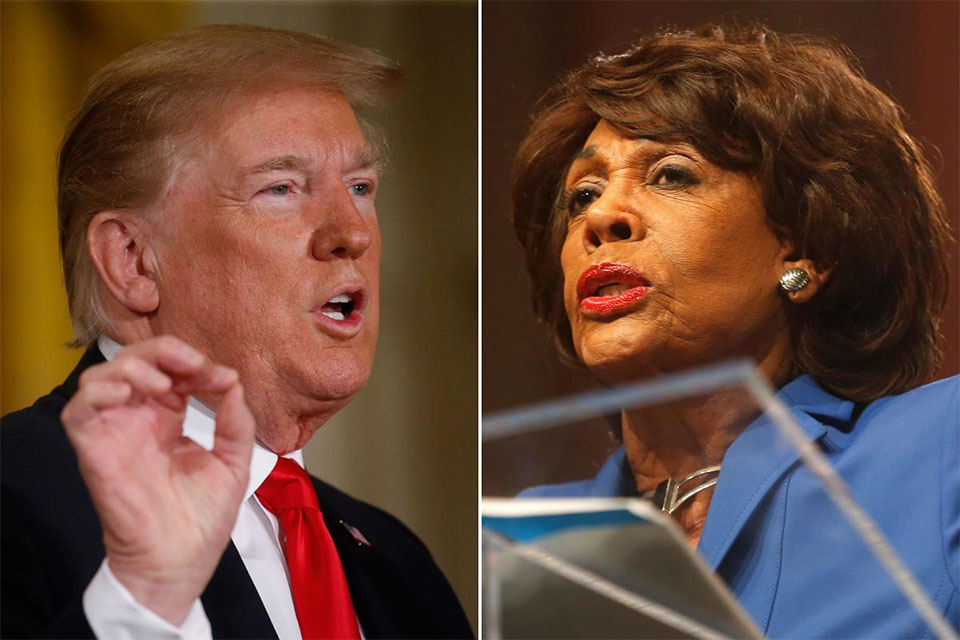 WASHINGTON, June 26: President Donald Trump lashed out on Monday at a Democratic congresswoman who urged Americans to confront members of Trump’s inner circle in public places as tensions rose over the Republican president’s hardline immigration policy.

Trump faced a global outcry this month, including criticism from some in his own party, over migrant children separated from their parents by U.S. authorities under the administration’s policy of seeking to detain and prosecute adults caught entering the country illegally.

The president retreated on Wednesday, ordering an end to the family separations at the U.S.-Mexico border, but leaving his 2-month-old “zero tolerance” policy in place. That raised questions about where to house families detained at the border and how to process them speedily. The government has yet to reunite more than 2,000 children with their parents.

Democratic Representative Maxine Waters told a crowd in her home state of California on Sunday that a Virginia restaurant’s refusal on Friday to serve White House press secretary Sarah Sanders should be a model for resisting Trump.

“If you see anybody from that Cabinet in a restaurant, in a department store, at a gasoline station, you get out and you create a crowd. And you push back on them. And you tell them they’re not welcome anymore, anywhere. We’ve got to get the children connected to their parents,” Waters said.

Trump, who has stepped up his often harsh attacks on Democrats ahead of November’s congressional elections, again targeted Waters on Monday and lumped her in with House of Representatives Democratic leader Nancy Pelosi.

“Congresswoman Maxine Waters, an extraordinarily low IQ person, has become, together with Nancy Pelosi, the Face of the Democrat Party. She has just called for harm to supporters, of which there are many, of the Make America Great Again movement. Be careful what you wish for Max!” he said.

He attacked the Red Hen restaurant in Lexington, Virginia, tweeting it “should focus more on cleaning its filthy canopies, doors and windows (badly needs a paint job) rather than refusing to serve a fine person like Sarah Huckabee Sanders.”

Sanders began her regular White House press briefing on Monday acknowledging her removal from the restaurant and said: “Healthy debate on ideas and political philosophy is important, but the calls for harassment and push for any Trump supporter to avoid the public is unacceptable.”

Pelosi called for cooler heads on both sides.

“In the crucial months ahead, we must strive to make America beautiful again. Trump’s daily lack of civility has provoked responses that are predictable but unacceptable. As we go forward, we must conduct elections in a way that achieves unity from sea to shining sea,” she said.

The American Civil Liberties Union urged a federal judge in San Diego on Monday to block the administration from routinely separating unauthorized immigrant parents from their children, saying an injunction was needed because Trump’s order to end separations contained “loopholes,” even when children’s welfare might be endangered.

A brief filed by the ACLU contained numerous reports of parents unable to locate or communicate with their children after they were separated by border officials.

In one declaration filed with the brief, a mother identified only by her initials E.J.O.E. said that “the government told her that she would be reunited with her son if she renounced her statement of fear,” a first step in asking for asylum. The mother did so, but was then deported without her 8-year-old son.

Although Republicans control both chambers in Congress, disagreements between moderates and conservatives in the party over immigration matters are dampening prospects for a speedy legislative fix to the border crisis.

Republican Representative Mark Meadows, leader of a conservative faction among House Republicans, said he expected that an immigration bill that will likely be offered for a potential vote in the House some time this week would fail. It would be the second attempt in two weeks.

On Thursday, the House rejected a measure favored by conservatives that would have halted the practice of splitting up families and addressed a range of other immigration issues.

Trump has expressed frustration at laws granting due process to illegal immigrants and reiterated on Monday that people should be turned away at the border. Democrats have accused him of wanting to circumvent the U.S. Constitution’s guarantee of due process for those accused of crimes.

“We want a system where, when people come in illegally, they have to go out. And a nice simple system that works,” Trump told reporters on Monday.

PORTLAND, June 30: Liberal activists, parents and first-time protesters motivated by accounts of children separated from their parents at the U.S.-Mexico... Read More...

Nepal witnesses sharp decline in COVID-19 cases, only 570 new cases recorded in past 24 hours
20 hours ago
Marriage attendee found with left leg chopped off
23 hours ago