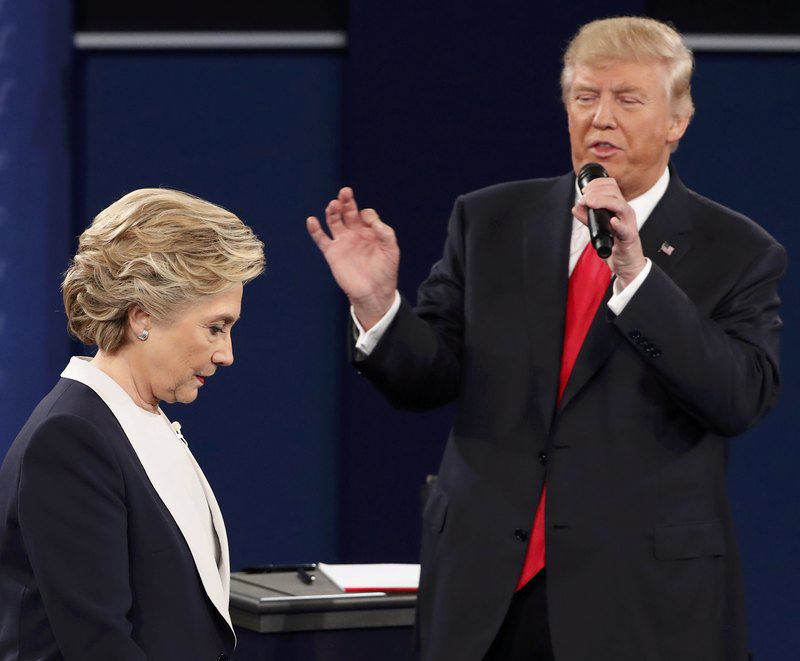 WASHINGTON, Oct 10: A defiant Donald Trump on Sunday attacked former President Bill Clinton for his treatment of women and vowed, if he won the White House, to put Hillary Clinton in jail for operating a private email server while US secretary of state.

In a contentious town-hall debate, Trump, the Republican presidential candidate, said he would appoint a special prosecutor to look into his Democratic rival’s email use because she had endangered national security during her tenure as President Barack Obama’s chief diplomat from 2009-2013.

The 90-minute debate got off to a chilly start when the two candidates for the Nov. 8 election greeted each other without the traditional handshake. It quickly turned into an acrimonious discussion of a 2005 video that emerged on Friday in which Trump was heard using vulgar language and talking about groping women without consent.

Trump also went on the attack against Clinton over her private email server, saying: “You ought to be ashamed of yourself.”

Clinton said, “You know it’s just awfully good that someone with the temperament of Donald Trump is not in charge of the law in this country.” Trump shot back: “Because you’d be in jail.”

A nearly year-long FBI investigation into the emails concluded earlier this year without charges being filed, although FBI Director James Comey said Clinton had been careless in her handling of sensitive material.

Clinton insisted there was “no evidence” that her server had been hacked and that any classified information had ended up in the wrong hands. “I take classified material very seriously,” she said.

She accused Trump of dodging a discussion of policy issues to avoid talking about his campaign because of “the way yours is exploding and Republicans are leaving you.”

A flood of Republicans have withdrawn their support for Trump over the video. The controversy has pitched Trump into the biggest crisis of his 16-month-old campaign and deepened fissures between him and establishment Republicans.

The debate’s town hall-style format, with undecided voters posing about half the questions and the debate’s two moderators posing the others, allowed the candidates to move freely around the stage and address the questioners directly.

Clinton, 68, and Trump, 70, both stood up to answer questions, and Clinton frequently stood directly in front of the questioners to try to make a connection with voters. At times Trump stood almost over her shoulder, or wandered the stage, while she spoke.

Trump complained about moderators Anderson Cooper of CNN and Martha Raddatz of ABC News, saying the debate was “three on one.”

Trump and Clinton clashed on a series of topics throughout the debate, battling over taxes, healthcare, US policy in the Syria civil war and Clinton’s comments that half of Trump’s supporters belonged in a “basket of deplorable.”

“Within hours I said I was sorry about the way I talked about that, because my problem is not with his supporters, it’s with him,” Clinton said.

Trump, in a badgering tone, offered a blistering critique of Clinton’s handling of foreign policy as secretary of state, repeatedly calling it a failure.

“She talks tough, she talks really tough,” Trump said. “She talks about the rebels, she doesn’t even know who the rebels are.”

Taking a breath through his nose with a loud sniff, he continued, “The fact is almost everything she’s done in foreign policy has been a mistake and a disaster.”

Trump also said he disagreed with Mike Pence, his vice presidential running mate, who declared last week in his debate against Clinton’s No. 2 Tim Kaine that the United States should be prepared to use military force if needed in Syria.

“He and I haven’t spoken and I disagree,” Trump said.

Trump met just hours before the debate on Sunday with three women who had accused Bill Clinton of sexual misconduct and a fourth woman who was a victim in a rape case that Hillary Clinton participated in as a defence attorney. All four sat in the first row of the audience at the debate.

Before the debate, Trump had threatened he was going to attack Bill Clinton for his marital infidelities in response to criticism from Hillary Clinton that the Republican nominee is a misogynist who has a history of mistreating women.

None of the accusations was new. Bill Clinton was never charged in any of the cases, and he settled a sexual harassment suit with one of the women, Paula Jones, for $850,000 with no apology or admission of guilt.

Also at the event was Kathy Shelton, who was raped at the age of 12. Hillary Clinton, a practising attorney at the time, defended the rapist who ultimately pleaded guilty to a reduced charge.

Clinton’s campaign responded to Trump’s pre-debate event by calling it a “stunt” and a “destructive race to the bottom.”

Asked at the end to name one thing each admired about the other, Clinton said she respected his children for their ability and devotion to Trump. In response, Trump called her a fighter and said he admired her for her refusal to give up.

As the moderators announced the end of the debate, the two candidates turned toward each other and shook hands.

Their next and last debate are on Oct. 19.

FORT LAUDERDALE:  The race for the White House narrowed noticeably on Sunday as Hillary Clinton sought to shake off a renewed... Read More...