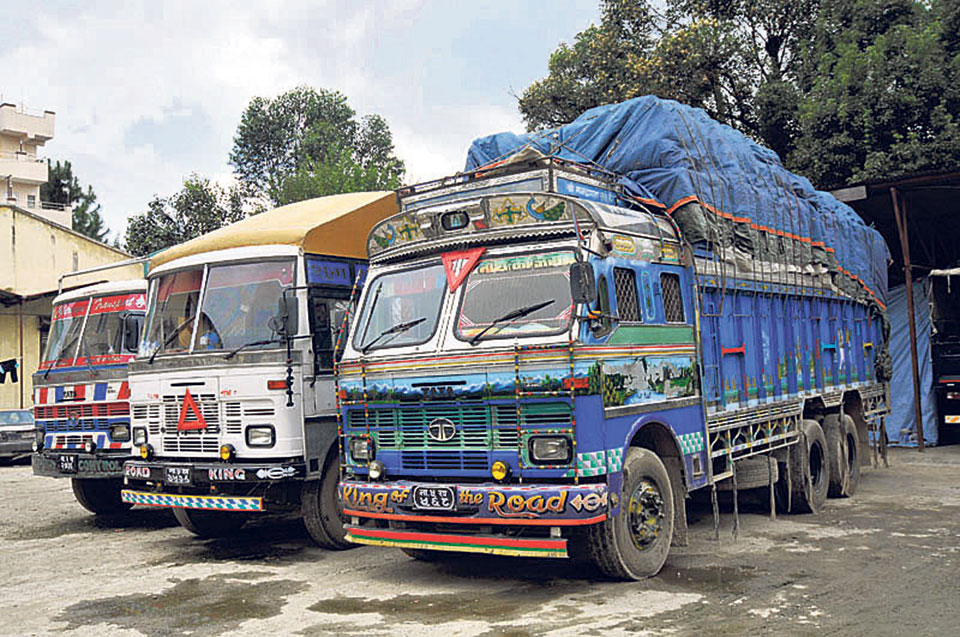 KATHMANDU, July 24: Truck operators have withdrawn all their protest programs after signing a three-point agreement with the government.

The government and the truck operators have agreed to form a nine-member task force to study issues related to mandatory implementation of vehicle, consignment tracking system (VCTS), national route permit and increment in road tax, among others.

The agreement was reached during a meeting between a representative of the Federation of Truck Transport Entrepreneurs, Nepal (FTTEN) and officials of Ministry of Physical Infrastructure and Transport (MoPIT) and the Ministry of Industry, Commerce and Supplies (MoICS) held in Kathmandu.

The truck operators had started protest on July 17 after the government made vehicle online-based VCTS mandatory for trucking business.

The task force, which is led by Rajeshwor Gyawali -- a joint secretary at MoPIT, has representatives from the MoICS, Ministry of Home Affairs, Department of Transport Management, and FTTEN, among others. It has been given 30 days to submit its suggestions to the government.

Meanwhile, the FTTEN has signed a separate agreement with the Department of Revenue Investigation on Tuesday.

“We have decided to withdraw all our protest programs after the government agreed to study concerns raised by us in regard to VCTS and national route permit, and find practical solutions to them," Rajendra Kumar Shrestha, chairperson of FTTEN, said.

In the meeting, truck operators had requested the government officials to implement the online-based tracking system in a phase-wise manner.

Transport entrepreneurs will be liable to fines of up to Rs 50,000 for the first time and Rs 75,000 for the second time if they do not abide by the rules laid down in the VCTS.

“The decision to levy fines ranging from Rs 50,000 to Rs 100,000 does not look practical," Shrestha told Republica, adding: “Road tax, too, has been increased by 300% without holding any consultation with the stakeholders concerned.”

However, punishment is not limited to fines. When transport entrepreneurs fail to abide by the rules, security agencies can also impound their motor vehicles, according to the provision made in the VCTS.

Under VCTS, details of any container or truck carrying commodities for the purpose of wholesale trade must be registered in the online-based tracking system before transportation. The tracking system is aimed at controlling revenue leakage through smuggling and minimizing malpractices in the transportation of domestic products. Officials of Department of Revenue Investigation, importers and entrepreneurs can get a real-time update about the movement of cargo and consignments.

KATHMANDU, Jan 4: Accusing the government of ignoring their demands, government doctors have warned of intensifying their protests across the... Read More...

Citizenship Bill withdrawn from parliament due to lack of unanimous position among parties: Govt
27 minutes ago

Is the ruling alliance pulling an ‘election stunt’ in Nijgadh?
57 minutes ago