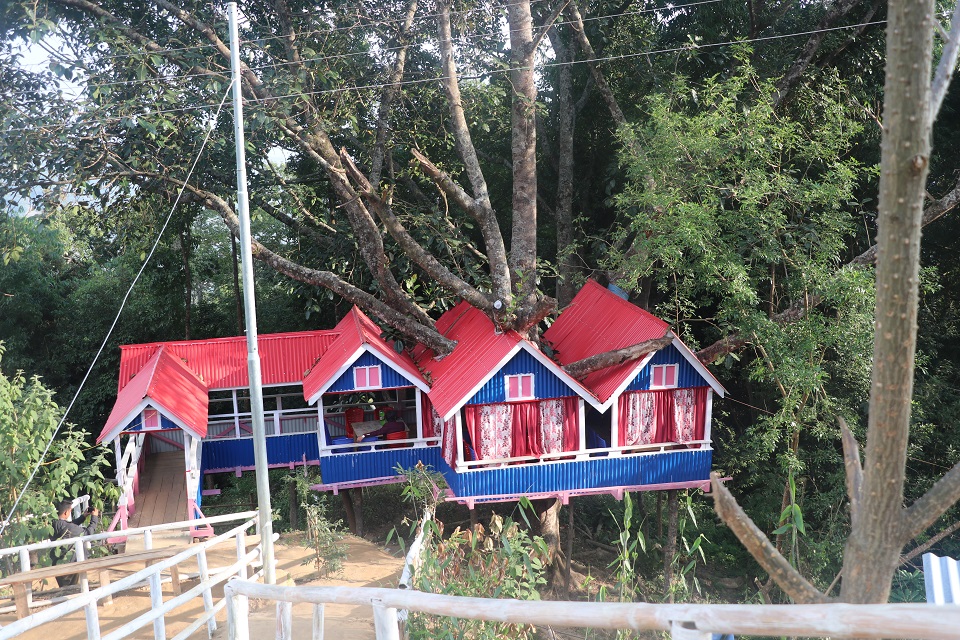 ITAHARI, Feb 8: An unknown corner of a known city, 1-Bigha-area, is now becoming a new travelling hotspot of Dharan.

This was after construction of beautifully designed tree houses, which is drawing crowds in greater number by the day.

Tree houses in the Subha Gantabya Resort draw around 1000 footfalls a day. The resort is located at a sloppy hill of Dharan-13 Shibhadhara, on the opposite side of the first turn of the serpentine road that connects Dharan and Bhedetar.

''People are thronging our resort because of the tree houses that we built for the first time not only in our city but also in east Nepal'', said Gyandip Limbu, the owner of the resort. According to Limbu, besides Dharan, people from Itahari, Biratnagar and surrounding cities are frequenting these innovative dining spaces. ''Even people from bordering areas of Bihar in India come here on a daily basis'', said Limbu.

Constructed at an estimated budget of 5 million rupees, Dharan's pioneering tree houses brought tourists even before its formal inaugural.

''We were of the mood to formally launch our tourism package on the eve of New Year 2018'', said Limbu, ''But, visitors started crowding as soon as we accomplished our preliminary construction phase of tree houses.''

First commercially successful tree house project at the upper edge in Dharan sub metropolis prompted a Community Forest at the lower edge of this touristic city to run a similar project.

Already a famous venue for fishing and picnic for city dwellers of Dharan, Yalambar Community Forest has been welcoming more visitors after the construction of a tree house. The Community Forest is mulling to construct few other typical tree houses in the days ahead.

With the success of two consecutive tree house projects, Dharan's tree house trend is now being replicated in other parts of eastern Nepal. Tree houses have been built in Ilam and Dhankuta districts as well. In Ilam, the Far East district of Nepal, a local Community Forest Users' Group has made two tree houses.

Together with local support, the Forest Users' Group has constructed beautiful tree houses at Ilam Municipality-4, Bhaludhunga. These two tree houses were inaugurated in January 2019 and have since led to a rise in the number and frequency of visitors on a daily basis.

Hari Gurung, the campaigner of tree house at Bhaludhunga said,'' Tree house is bringing at least 250 visitors a day.'' Gurung said Rs. 1.2 million invested on the tree houses had already recovered from the visitors. Bhaldhungha was previously an unknown travelling place at a stone-throwing distance from the district headquarters.

Similar is the story of Dhankuta district. Local youth duo -Prem Limbu and Hemkumar Limbu- followed the tree house trend. They inaugurated the first tree house package in the district in October, 2019.

Located at Chhathar Horpati Rural Municipality-5 Chumlung, the tree house has been a magnet of visitors. ''We serve various hotel and restaurant cuisines in our menu like any other normal restaurant'', said Prem Limbu,'' Still, visitors prefer ours for this new tree house concept.''