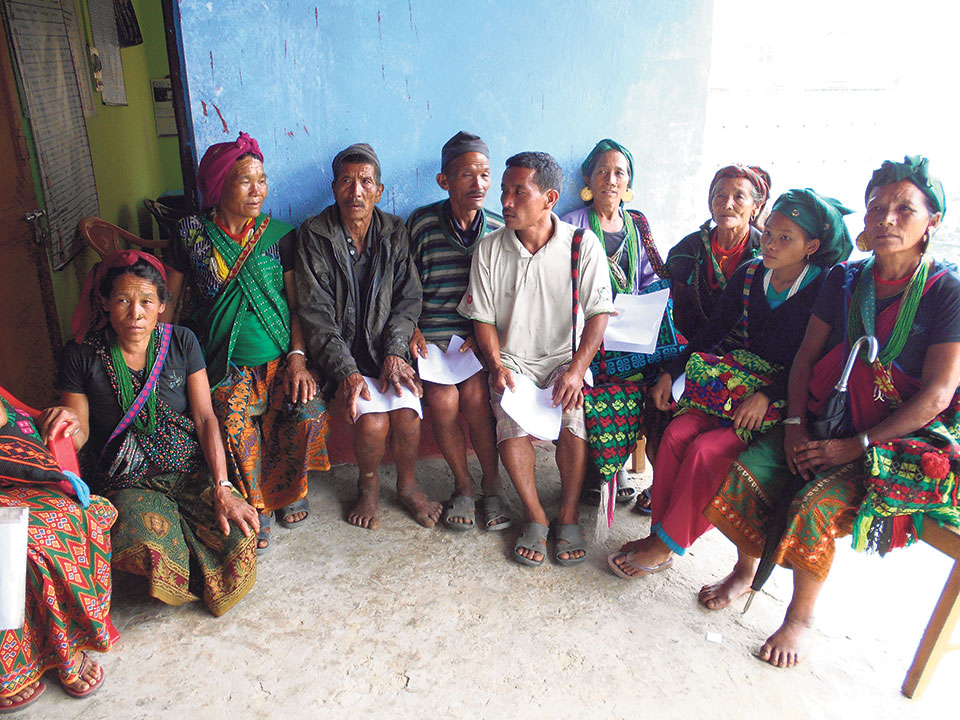 Family members of the victims that were shot and burned alive in a house in Rolpa on March 10, 1990, sit in front of a government office with applications requesting for details of the massacre in Rolpa in this recent photo.

ROLPA, Dec 18: They were mere peasants. They would work at landlord’s fields for meager payment and always had a tough time meeting their ends. During the then bloody armed conflict between the Maoists and the government, a few innocents from such families of a single village were burnt alive. According to the family members, the details of that gruesome murder have not been availed to them even after 12 years since the armed conflict ended.

On March 10, 1999, Begam Bahadur Pun, Man Bahadur Pun, Amrit Giri, Puste Giri, Nar Bahadur Pun, Dhate Pun, Evan Pun, Gopal Giri and Tirkharam Giri of Lungri village were burnt alive. Their families lament that they still do not know why their kin were killed so mercilessly. Even though the victims’ families have filed requests for inquiring their deaths, the state has not yet responded to their requests, they say.

Bal Bahadur Roka had a narrow escape on that day. ‘By luck’ he was saved.

“Nobody has given the reason why so many people were killed mercilessly that day. I had a very narrow escape. Or else I too would have left this world much ago,” said Roka. “It is the right of the families of the deceased to know why they were burnt. What was the reason behind those gruesome killings? We all want the details.”

Roka stated that the deceased were all from a very poor background. They did not even have land in their own name. Their families lived in huts.

On that fateful day, Roka was at his own house when the attackers opened fire. According to him, he escaped three bullets while jumping off from a window and moving to a safer zone.

“I sensed that something wrong and I jumped off the window. I was lucky to evade three bullets from piercing me.”

The attackers, after opening fire, prepared to burn the intended people alive. The incident had happened at around 10 pm on the day. Roka’s house was locked from outside and set on fire. Next day, a helicopter landed in the village, police inspected the scene, collected pieces of evidence and took the injured away.

“The helicopter took the burned to hospital. They were critically burned. Seeing their plight, it seemed that those who had died instantly were rather luckier.”

According to Roka, the people who had taken arms ‘for the sake of the poor’ had killed no one but poor youths. “What was the mistake of those poor peasants, all of them were young, all very innocent,” he defends stating that till now they even don’t who - the government forces or the Maoists - were behind the attack.

Along with Roka another person in that house was able to save his life that day. A bullet pierced through his ears, but he managed to survive, he said.

The attack was wild, according to one of the deceased’s widows, Dilmati Giri, 57. Her husband was among those who tried to escape the attack that day. “First they opened gun fire on the house and that that they locked the house and set it on fire. My husband was already injured. Yet he was trying to save his life and wanted to jump from the window. But they gunned him down,” says Dilmati stating that he heard about the incident from the survivors later on.

Her brother was also burned to death in the incident. “Their bodies were charred like wood, you could barely figure out their face or recognize them,” she said.

Gaumala Pun’s husband was also burnt alive that day. “I do not know why he was killed. We gave application requesting for details but have not been yet provided with an answered by the government even in so many years,” laments Gaumala.

The families of the deceased are waiting for an answer from the Truth and Reconciliation Commission (TRC). The conflict took the life of 969 people including the burnt ones in Rolpa alone and 33 have been registered as missing.

Dependra Pun, a parliamentarian from Province - 5 stated that the commission’s ineffective performance has turned down the hopes of the conflict victims. “We face very hard questions from the victims’ families. We expected the commission to come forward with answers, but the commission has not performed it as expected,” he said. A total of 3,038 complaints have been submitted to the TRC from Rolpa.

According to the spokesperson of the TRC, Madhavi Bhatta, the commission is presently investigating. “It is investigating under normal process. More than that, there is nothing to say. Soon, the commission’s term will expire soon,” she said. She added that the TRC might not complete all its probe if its present term is not extended beyond the present term. “Since the tenure of the TRC is coming to an end, it is necessary that the government extend its tenure and avail required resources for completing its purpose,” she stated.

ROLPA, July 18: A passenger bus has been buried by landslides in the district on Tuesday night. ... Read More...

ROLPA, Dec 16: Nepotism has been rampant in the CPN (Maoist Center) in Rolpa and Rukum districts, the cradle of the... Read More...