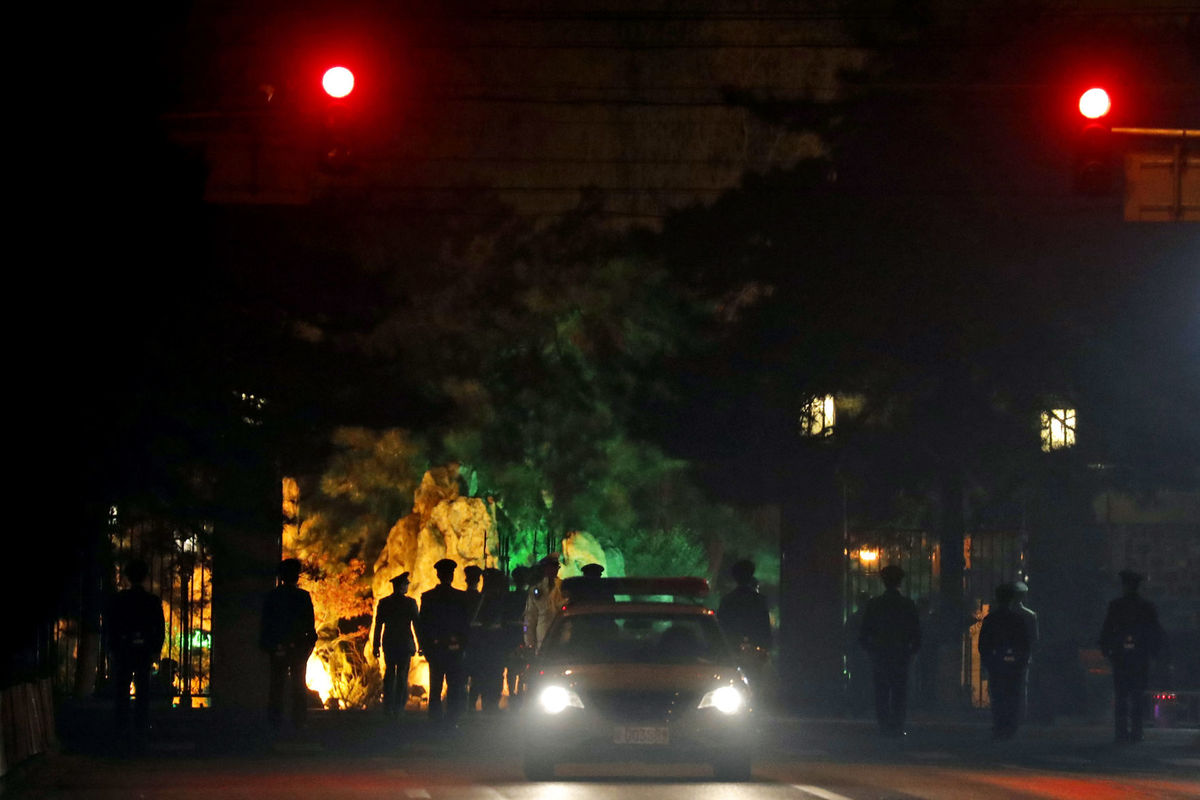 BEIJING, Mar 27: The arrival of a special train in Beijing and unusually heavy security at a guesthouse where prominent North Koreans have stayed in the past have raised speculation that Kim Jong Un is making his first visit to China as the North's leader.

Kim has summits planned with South Korean President Moon Jae-in in late April and with President Donald Trump by May. While there has been no word of a similar meeting with Chinese leaders, China has been one of North Korea's most important allies even though relations have chilled recently because of Kim's development of nuclear weapons and long-range missiles.

A vehicle convoy entered the Diaoyutai State Guesthouse in Beijing on Monday evening and a military honor guard and heavy security were seen later. That followed reports from Japanese network NTV and public broadcaster NHK of a special North Korean train arriving in Beijing under unusually heavy security.

Shortly before 11 a.m. Tuesday, a convoy of official Chinese cars was seen leaving the east gate of guesthouse, heading in the direction of government offices and the city's two train stations.

City police and the paramilitary People's Armed Police stood guard in the area and unidentified men in plainclothes attempted to prevent photographers from taking pictures.

Cars in the convoy were identified by yellow stickers but carried no diplomatic license plates. The guesthouse had been the favored residence of Kim's father, North Korea's former leader Kim Jong Il.

A staffer with the Chinese foreign ministry's press office responded to a question about Kim's possible presence in Beijing by saying, "So far, I am not aware of the situation you mentioned."

Past visits by Kim Jong Il to China were surrounded in secrecy, with Beijing only confirming his presence after he had crossed the border by train back into North Korea.

A spokeswoman for the Chinese Foreign Ministry said she was not aware of the situation and had no further comment. North Korea's state-run media had no reports of a delegation traveling to China.

South Korea's presidential office said Tuesday that it could not confirm reports that the train carried Kim nor a separate report that Kim's sister was onboard.

South Korean analysts were doubtful the visitor is Kim Jong Un. Since succeeding his father as leader in 2011, Kim has touted an image of his country as diplomatic equal to China and it's unlikely he would sneak into Beijing for his first face-to-face meetings with the Chinese leadership, the analysts said.

They said it's more likely Kim sent a special envoy, possibly his sister Kim Yo Jong, to appease a traditional ally ahead of his planned meetings with the presidents of South Korea and the United States. The envoy could potentially seek Chinese commitment for future support should North Korea's talks with rivals fall through, said Du Hyeogn Cha, a visiting scholar at Seoul's Asan Institute for Policy Studies.

"North Korea doesn't want to send a message that China has been pushed to the back as it makes diplomatic approaches to the United States and South Korea," said Cha, adding that the visit could be part of the North's effort to gain leverage in the talks with South Korea and the United States.

"If the talks with South Korea and the United States fall through, North Korea will surely try to demonstrate its nuclear weapons and missile capabilities again. The special envoy could discuss this possibility with Chinese officials, asking China not to press too hard with sanctions if that happens," Cha said.

NTV reported that the green and yellow train appeared very similar to the one that Kim Jong Il took to Beijing in 2011 and has 21 cars.

A video that aired on NTV also showed a motorcade of black limousines waiting at the train station and rows of Chinese soldiers marching on what appeared to be a train platform. The video did not show anyone getting off the train.

White House spokesman Raj Shah said Monday that the U.S. could not confirm reports that Kim was visiting China.

Shah reiterated Trump's plans to meet with Kim, saying the U.S.-led international pressure campaign against Pyongyang "has paid dividends and has brought the North Koreans to the table."