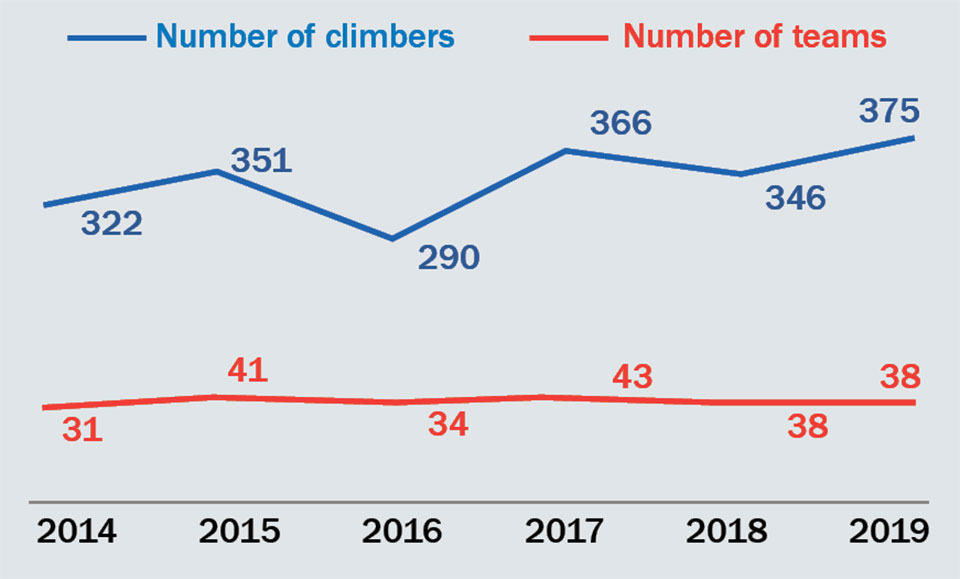 KATHMANDU, April 28: Everest climbers are likely to face a serious traffic problem on the slopes of the world’s highest mountain this spring.

A record number of people have received climbing permission from the tourism ministry for the  spring climbing season.

As of now, 375 climbers have received permission from the Department of Tourism Management (DoTM), the body that handles the mountaineering industry.

The number of permits issued for Everest  is the highest  issued so far, according to tourism officials.

The spring climbing season has already started . Some climbers have reached  Everest Base Camp for acclimatization. Climbing expedition firms are still lined up at the department for permission for still more climbers. So the number is likely to increase by another 10 or 12.

“We are worried at the big number of climbers receiving  permission for Everest this year. Security personnel are being mobilized as liaison  to help  ease the climber traffic,” said Department Director General Dandu Raj Ghimire. “They should be able to  manage the flow of climbers. So let’s hope there will be no traffic problem.”

Climbers already at  Base Camp head  higher up by the second week of May and then wait for a window of favorable weather to open up . Once the weather improves climbers and Sherpa guides push for the cherished summit  .

The department, meanwhile, has no plans to ease the climber traffic.

According to the department, 322 climbers  received permission for  Everest in 2014. The number  rose to 351 in 2015. Expeditions in 2014 and 2015 were cancelled. The expeditions for 2014 were cancelled after  avalanche killed Sherpas  taking essential climbing gear up the mountain.

The number of climbers dipped slightly  in 2016. Sixteen Sherpa guides were killed at the Khumbu Icefall when an avalanche hit them as they were waiting to cross a ladder. In 2015, 19 climbers died in a massive avalanche at base camp triggered by  earthquake .

Despite the back-to-back disasters,  climbers have been  risking life and limb and their numbers  continue to surge.

Apart from the climbers, support staff also need to go to the higher camps with supplies and  to fix tents. High-altitude Sherpa guides scale the mountain together with the climbers. The convergence  of climbers,  guides and support staff cause the traffic congestion .

Efforts underway to relocate Everest Base Camp, mountaineers suggest not to hurry

KATHMANDU, June 21: The homework to move the seven-decade-old Everest Base Camp a couple of hundred meters below its current... Read More...