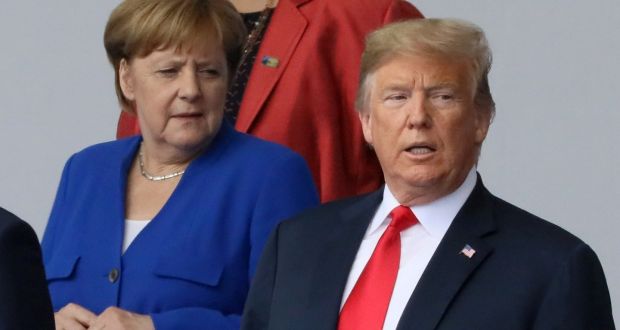 Equity, bond and money market funds based in Europe all suffered at least €11 billion in net outflows during the month, marking it the worst month for redemptions since September 2013, according to Thomson Reuters Lipper, the data provider.

The investor flight came as the White House outlined plans to impose tariffs on imports from China, rattling markets and prompting fears that a trade war could threaten global supply chains.

Brussels will make a last-ditch attempt to convince US president Donald Trump not to go ahead with punitive tariffs on the EU car sector even as hopes diminish that a full-blown trade war with the US can be avoided.

Jean-Claude Juncker, president of the European Commission, will meet Mr Trump in Washington DC on Wednesday, in a meeting that EU officials said would be aimed at “de-escalating” tensions by exploring “various avenues” for trade talks.

‘Error of his ways’

Meanwhile, Ireland’s EU commissioner Phil Hogan said the EU must respond to Mr Trump’s trade policies by “bullying” him back.

It is only by adopting a hard-line approach towards the US that Mr Trump could be shown “the error of his ways”, Mr Hogan told the opening session of the MacGill Summer School in Donegal on Monday morning.

Detlef Glow, head of Lipper Europe, Middle East and Africa research, said heightened insecurity had prompted the outflows of funds, with investors fearing “possible trade wars and the increasing political controversy between Iran and the US, which can lead to higher energy prices and, therefore, higher costs for companies”.

“Some of the outflows can be seen as a switch into risk-off mode by the European investors,” he said.

Ben Seager-Scott, chief investment strategist at Tilney, a financial planning company, said many investors had experienced several years of strong growth across their portfolios but were now concerned about potential losses. “There is elevated political risk now. There is concern about trade wars and currency risk. This would spook a lot of investors.”

June marked the second month in a row of net redemptions from long-term funds domiciled in Europe after 16 previous months of inflows.

According to the Lipper figures, which encompass open-ended funds in Europe including exchange traded funds, emerging market equity, global bond and European equity funds were among those hardest hit with redemptions.

Mr Trump this month kicked off the process of imposing tariffs on a further $200 billion of imports from China. Beijing has accused Washington of “trade bullying” and slapped tariffs on $34 billion of US exports. – Copyright The Financial Times Limited 2018

Donald Trump has threatened to escalate a global trade war on the EU and Canada, hours before he meets their... Read More...