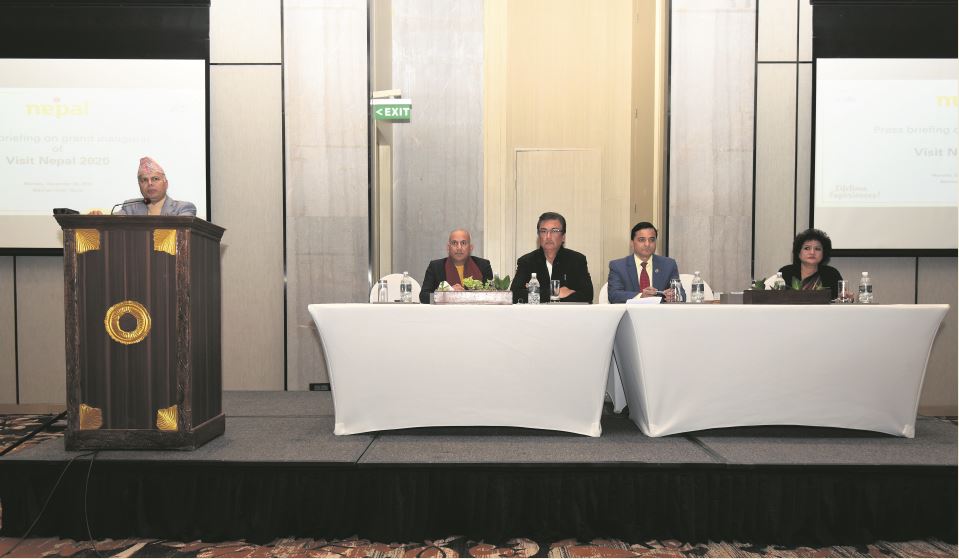 KATHMANDU, Dec 31 : Tourism ministers from four countries will grace the inaugural ceremony of Visit Nepal year (VNY) 2020 to be held at Dasharath Stadium on Wednesday.

According to the Ministry of Culture, Tourism and Civil Aviation, tourism ministers of India, China, Myanmar and Jamaica, along with delegations from seven countries, will attend the inauguration ceremony.

Minister for Culture, Tourism and Civil Aviation Yogesh Bhattarai had previously said that tourism ministers from 40 countries will be invited for the inauguration ceremony. “The participation of 20 delegations from tourism bodies of different countries has been confirmed,” Rudrasingh Tamang, the spokesperson for the Ministry of Culture, Tourism and Civil Aviation, said.

Speaking at a press briefing organized in Kathmandu on Monday, Deepak Raj Joshi, former CEO of Nepal Tourism Board, said that ministers from India and China will arrive tomorrow, whereas some delegates have already arrived.

The government is set to inaugurate the year-long campaign in seven provinces simultaneously. The inauguration ceremony will take place at Biratnagar of Province 1, Janaki Temple of Province 2, Sauraha of Province 3, Pokhara of Gandaki Province, Bardiya of Province 5, Surkhet of Karnali Province and Dhangadhi of Sudurpashchim Province.

The inauguration ceremony in Kathmandu will be five hours long. Cultural performance of different ethnic groups and indigenous nationalities will be the attraction of the inauguration ceremony, according to the ministry. Likewise, there will also be performances by Nepal Army, Nepal Police and Armed Police Force as well as several Nepali artistes.

According to the ministry, some 20,000 people are expected to participate in the inauguration ceremony.

Speaking at the press meet, Suraj Vaidya, national program coordinator for the VNY 2020, said that all preparations for the inauguration ceremony have been completed.

The VNY 2020 will be inaugurated by President Bidhya Devi Bhandari, while Prime Minister Khadga Prasad Oli will make a special address. The inauguration ceremony will see participation of Vice President, former prime ministers, leaders of different political parties, ministers from provincial governments, members of parliament, and chief of constitutional bodies, among others.

The ministry had held a discussion with ambassadors of 31 different countries as well has heads of development partners last month.

Also speaking at the press meet, Bhattarai said that the government has plans of develop tourism as the mainstay of national economy. "The contribution of tourism to GDP is 3% at present. Our target is to raise it to 10% at the end of 15th five-year plan," he added.

He also said the main objective of the campaign is to promote Nepal as a destination in the global arena. "Along with the target of increasing tourist numbers to two million annually, the campaign will also focus on enhancing quality of our tourism products and services, increasing tourist spending, and creating of jobs," he said.

The government has announced that the foreign films which will be shot in Nepal from the year 2023 to 2033... Read More...

Gold price increases by Rs 500 per tola
40 minutes ago