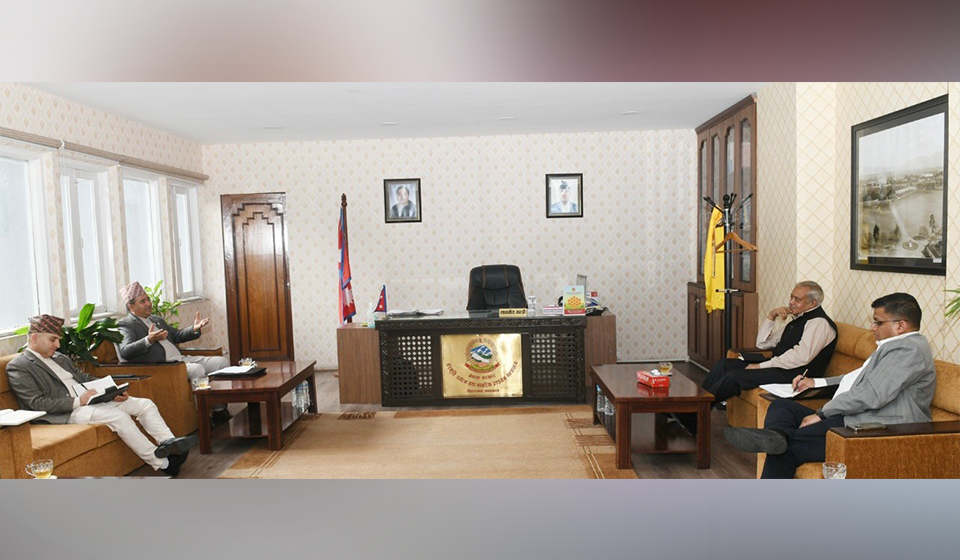 KATHMANDU, July 22: The newly appointed Indian Ambassador to Nepal, Naveen Srivastava has paid a courtesy call on Minister for Culture, Tourism and Civil Aviation, Jeevan Ram Shrestha. In the meeting held today at the ministry, they discussed various aspects of the existing relations and cooperation between the two countries.

Minister Shrestha expressed his belief that during the tenure of Ambassador Srivastava, the relationship between the two countries will become stronger. While discussing the social, cultural, religious and economic relations that exist between Nepal and India for centuries, Minister Shrestha said that there are many possibilities for cooperation between the two countries.

Minister Shrestha asked Ambassador Srivastava to provide a new air route for Gautam Buddha International Airport to operate at full capacity. Minister Shrestha says that if a new air entry point is available, the cost and time of flights will be reduced and the problem of air traffic jams will be solved.

Ambassador Srivastava assured that a decision will be reached soon regarding the new air route. They also discussed the development of infrastructure related to the Ramayana circuit connecting the religious places associated with Lord Ram and Sita. Minister Shrestha says that the Ramayana circuit will help in the promotion of religious tourism.

During the visit of Indian Prime Minister Narendra Modi to Nepal to develop Janakpur as a tourist destination reflecting the religious and mythological importance, they also discussed advancing the project related to the development of the larger Janakpur area.

They also had a conversation on the status of the project conducted with Indian assistance to rebuild the structures damaged by the earthquake. Minister Shrestha also discussed with Ambassador Srivastava the promotional program to be done to increase the arrival of Indian tourists in Nepal, stating that the government has given priority to the revival of the tourism sector after the coronavirus pandemic.

KATHMANDU, August 5: The government, which made a decision by violating the law, has defied the court on the same... Read More...

Gangs and mafia are creating problem for management of waste in Kathmandu Valley: Minister Shrestha