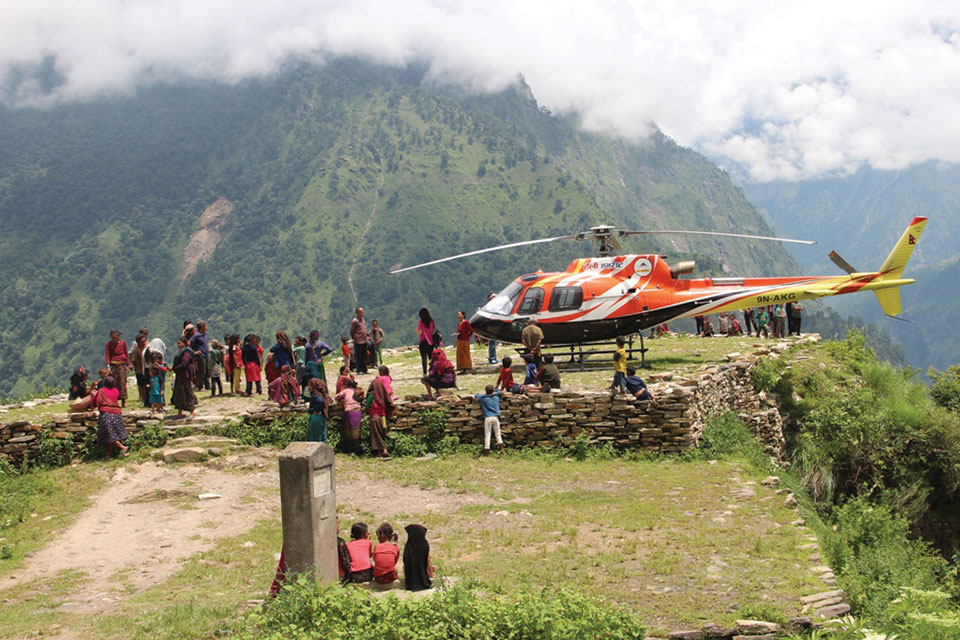 A helicopter waits to lift a patient in Kerauja area of Gorkha in this file photo. Photo: Republica Files

POKHARA, May 16: Last Thursday, high altitude sickness hit an Italian national Marco Roccufrancufco Morelia and two Nepali guides at Sairbung peak of Mustang. Although the authorities concerned were aware of their plight, a rescue helicopter did not reach to rescue them on time. When the helicopter arrived at the spot next day, Morelia, 68, had already succumbed to the sickness. Although police blamed bad weather for delaying the rescue, specific procedures that delay the rescue cannot be overlooked.

However, the process was lengthy, which included getting the Home Ministry’s permission to take flight through semi-restricted areas of Mustang – Sarebung area. By the time he received the ministry’s approval, it was already 3 pm. The rescue helicopter took and reached Jomsom at 4 pm. By that time, the weather got worse. Because of the fierce winds, the helicopter could not rush for rescue until Friday morning. It returned with Morelia’s dead body and two sick guides.

Three months ago, on February 20, a local of Syo village of Gorkha, Tasi Dorje Lama, 32, fell at home and started bleeding. His family members wanted to save his life at any cost, and they tried to charter a helicopter. It took two entire days for the family to complete all the formalities to charter the helicopter. After paying Rs 210,00, they were informed that the helicopter would airlift Lama at 7:30 am on February 22. However, Lama died an hour before that.

Every year dozens of people from remote areas, as well as trekkers and mountaineers, lose life due to delay in rescue. Even though they are ready to pay for helicopters, lengthy formalities prevent the immediate dispatch of the rescue team. While single second counts for an injured or sick person, delay of hours or days are taken normally by those involved in the process and blame it on the procedural requirements.

Tourism entrepreneurs have pointed out this as a severe drawback for the tourism industry as well as for people in the mountain area. They have called on for immediate review on the process so that lives could be saved. Although helicopter charter is always a costly deal for commoners and tourists, it becomes even challenging during public holidays.

According to the Gyawali, Morelia’s life could have been saved if the helicopter was dispatched as soon as they had received the information. Delay of entire a day cost him his life. “So, there is a dire need to review the procedures involved in approving and dispatching air rescue missions. In cases of emergencies, the process should be short and effecient,” he suggested.

Gyawali stated acquiring permission from the Home Ministry is one of the most significant hassles. It is simply not wise to focus on formalities when someone’s life is at stake. “More lives could be saved if authorities arrange the rescue first and complete the formalities later,” he noted.

Apart from the procedural hurdles, bad weather is another challenge affecting rescue operations in the mountainous region. Few companies offer rescue service. In such a situation, it is essential to make the rescue process hassle-free, said Deepak Raj Adhikari, former president of Trekking Agency Association of Nepal (TAAN).

“It is very unfair that tourists are not able to get help on time even when they are willing to pay for it. There are certain restricted zones in the mountains, and it becomes near to impossible to help tourists if they need emergency help there,” he said. Adhikari also said that such procedures should be reviewed immediately.

Manasalu, Chum Valley of Gorkha, Naar-Fu of Manang and Upper Mustang fall under restricted zone where air rescue operations cannot be carried out without permission from the Home Ministry. Remarkably, those areas fall within one or the other trekking or mountaineering routes.

Dhawa Gyalgen Lama, a local of Gorkha, who has assisted several helicopter rescue missions, also noted that officials give more importance to formalities rather than saving lives.  It is vital to avail quick and quality services in case of medical emergencies to locals and tourists, he said.

Chief District Officer of Mustang, Ghanashyam Gautam stated that the process of rescue begins only after a helicopter company applies it. Since the rescue department of the Home Ministry is open round the clock, there shouldn’t be much hassle, he defended. “But the process has to be followed, “ he stressed. He even added that the rescue process had been eased of late.

THINI, MUSTANG, Jan 3: Over 57,000 foreigners have visited Mustang district in 2019. According to the chief of Jomsom Office... Read More...

Mustang welcomes 4,000 tourists in a day

POKHARA, Oct 25: Mustang, one of the popular tourist hubs of Nepal, is witnessing a significantly high number of domestic tourists... Read More...