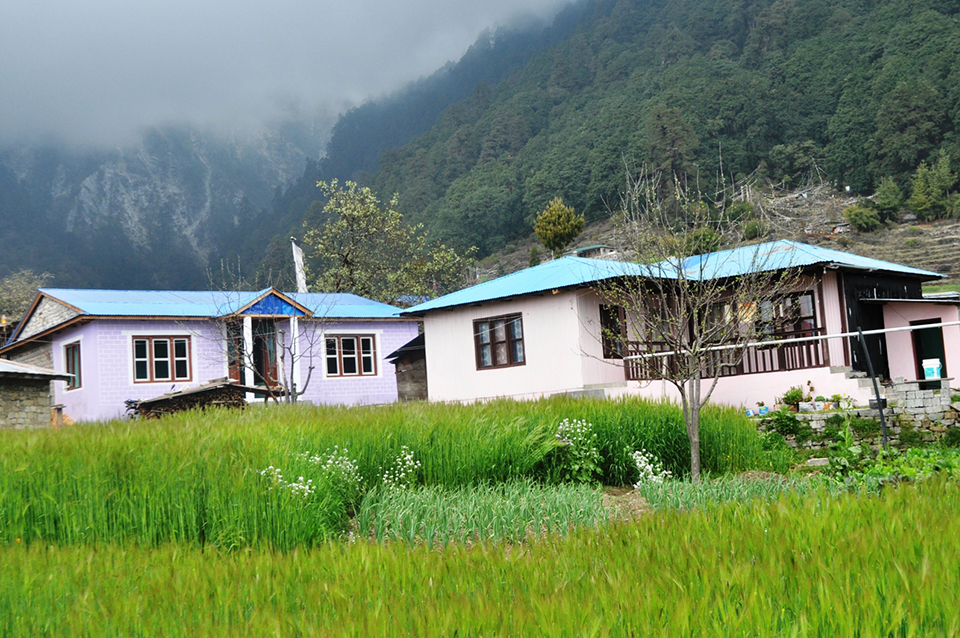 SINDHUPALCHOWK, April 17: After the devastating earthquake of April 2015 shattered his dreams of expanding tourism business, Pemanetup Sherpa of Melamchighyang village of Helambu thought that life would never be same again. His cottages meant for home-stay service for domestic and international tourists had turned to rubbles right in front of his eyes. He thought the entire village is now doomed in terms of economic prosperity as well. Four years down the line, time has however proved Sherpa wrong. Home-stay service has not only revived in his village but is thriving like never before.

“Time taught a lot. No matter how big a storm comes in your life, it passes,” he sounded wise. Until before the earthquake, the villagers offered common rooms to visitors and for such services they charged average prices. Reflecting now, they say that their services at the time were not even professional in terms of food and retreat.

We indeed wanted to get back into our business – operate homestay service for tourists once again. Entire Helambu is popular among tourists. But before the earthquake, we did not have well-designed houses. Now, our homes are designed to suit their needs, and our village looks even better. -- Pemanetup Sherpa of Melamchighyang village

“We have learnt to be professional. We take far better care of tourists and their needs nowadays,” notes Sherpa. What has brought the change in the capacity and attitude of the locals is the reconstruction process. After the government compelled them to build earthquake-resistant homes, they learned of ways to make them even more cozy for tourists. As new houses were in the making, they considered those factors while designing it.

“We indeed wanted to get back into our business – operate homestay service for tourists once again. Entire Helambu is popular among tourists,” said Sherpa. “But before the earthquake, we did not have well-designed houses. Now, our homes are designed to suit their needs, and our village looks even better,” he added.

Many families in the past offered homestay service to foreigners. They used to share their personal rooms with their guests. “Only a very few provided a separate room to the tourists,” Sherpa reported.

Almost every household now has a separate room for guests. These rooms have almost all the facilities that a guest would look for. “We did not care much about this earlier. Reconstruction gave us this opportunity,” Sherpa explained.

There are around 140 families in Sherpa's village. With the reconstruction process nearing completion, all their houses look alike giving a great look to the village.

“Over 90 percent of the families have completed the construction of their new homes. People are happy here, all are doing great business through homestay service,” said another resident of the village, Kami Lamal. “Tourists love our place, our food, our services,” he added.

According to Kami, the best part about reconstruction was its focus on retaining the originality of the village. While reconstruction didn't have a good effect everywhere, his village has stood out, he claims.

“What we feel great about is that we have not lost our originality. In fact, our homes have been better and stylish than before yet without losing the traditional look,” he said. “We have constructed comfortable toilets as well for tourists. Earlier, toilets were not a huge priority.”

To attract tourists, some locals have constructed modern or western style toilets with better flushes and space. “Reconstruction allowed us to learn a lot and build facilities that our homes were missing,” Kami said.

Depending on their capacity, locals have constructed homestay cottages with capacity from four to 18 people. More significant the number of tourists they receive, the higher the reward. According to Kami, receiving tourists is not just about business; it helps one grow in many aspects.

“When you welcome tourists, serve them, spend time with them, and help them mix up with your culture, it gives you great satisfaction. You are paid not just in term of money,” Kami described. He added that the village receives not only international but also a considerable number of domestic tourists.

Locals are also trying to revive Helambu's lost fruit product. Once well known for apples, this place no more produces enough apples. According to Kami, a growing number of locals are considering farming apple. “Once we can revive apple farming, we will feel even richer,” Kami said.

Melamchighyang village attracts tourists also because of Buddha connection. This location is considered very special for those who have an inclination towards Buddha or his teachings as it is believed that a Buddhist Guru Padam Sambhav had meditated and got enlightened here.

Tourists who come here for the spiritual reason are found meditating silently in different locations of the village. There are several Gumbas around where they take refuge.

“We had almost lost hope after the earthquake, but now we are receiving many tourists. We can feel that tourism is booming here once again,” remarks elated Sherpa.

DOLPA, June 4: The construction of a 3.8 km-long trekking circuit from the Phoksundo Lake, which lies next to Rigmogaun village... Read More...

JAJARKOT, May 11: A team of experts from the National Nature Conservation Trust has reached Dolpa and Jumla for the... Read More...

Through a different lens

In an attempt to promote tourism and provide a platform for creative expression Nepal Tourism Board (NTB) has been organizing... Read More...