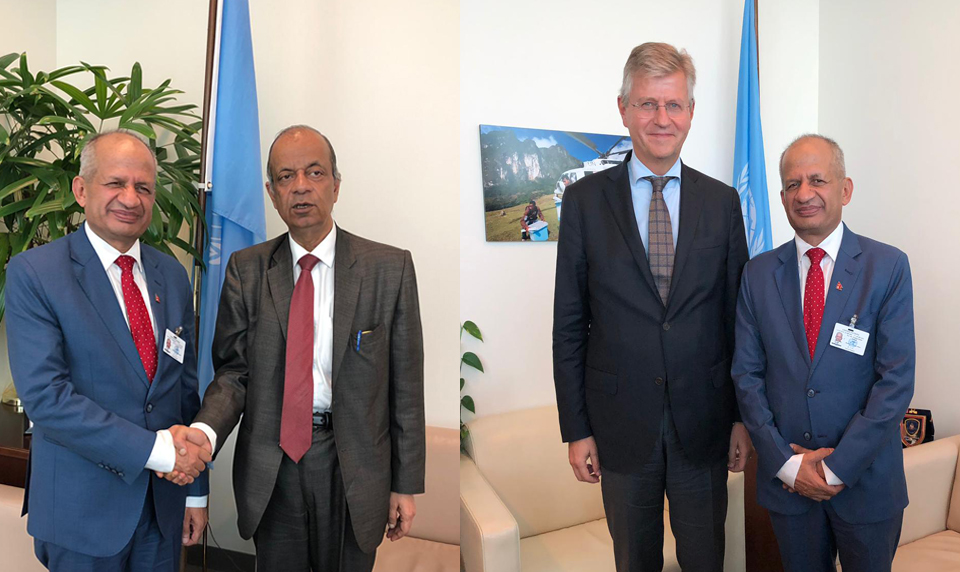 NEW YORK, Sept 24: High-ranking officials of the United Nations on Monday lauded the contribution made by Nepal in establishing world peace through the UN Peacekeeping.

Under Secretary General of the UN Department of Peace Operations, Jean-Pierre Lacroix and Under-Secretary-Genral of the UN Peace Operations Coordination Department, Atul Khare praised the Nepali blue helmets working in UN peacekeeping operations for their bravery, professionalism and honesty during their separate meetings with Foreign Minister Pradeep Kumar Gyawali in New York.

Gyawali is currently visiting New York to participate in the 74th General Assembly of the United Nations.

Stating that Nepal has given high importance to the UN peacekeeping operations for international peace and stability, Minister Gyawali vowed to extend its cooperation for the world peace.

"The UN charter has been one of the guiding principles of Nepal's foreign policy. At the same time, we have given high priority to the peacekeeping operations around the world," Gyawali said.

Minister Gyawali also told the two UN authorities that Nepal would be ready to increase the number of its soldiers to UN Peacekeeping Force.

Joint Secretary at the Ministry of Foreign Affairs, Bharat Raj Poudyal, Nepal's permanent representative to the UN, Amrit Bahadur Rai, Deputy Permanent Representative of Nepal, Ghanshyam Bhandari and among other officials were also present during the meetings.

The foreign minister has been holding series of meetings during his ongoing visit to New York on the eve of 74th UNGA.

Gyawali will be leading a 'High-Level Session on Multi-sectoral Initiative to Poverty Alleviation, Quality Education, Climate Action and Inclusiveness' later on Tuesday.

Husband and wife trapped in river rescued
38 minutes ago