To leave or live in Nepal? 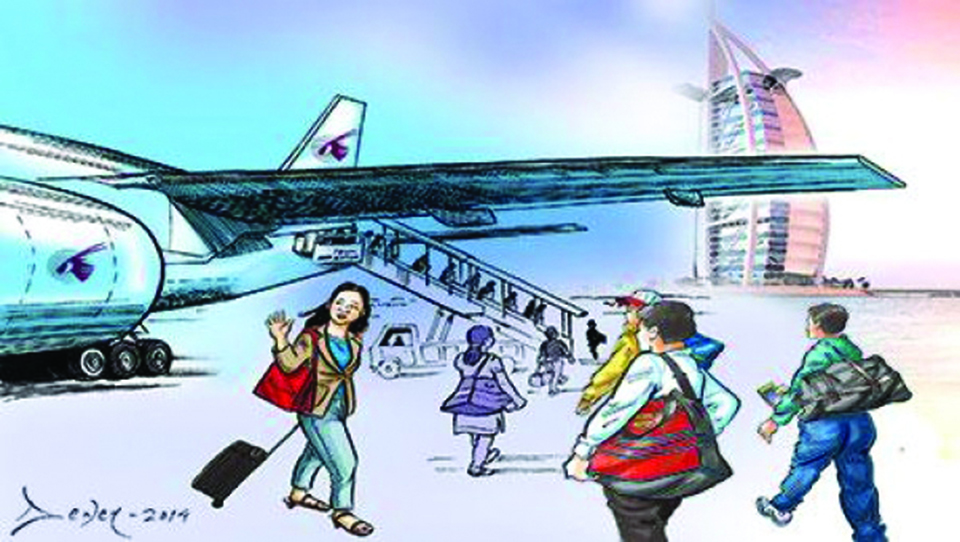 The author, an engineer by training in Europe, dedicates much of his time as an academic faculty and professional mentor
news@myrepublica.com

Nepalis in the US, Europe or Australia desperately like to leave. Love for home lingers in their hearts, but due to many factors they cannot just leave

When Mr Bhattarai, hailing from a farmer’s family, applied for a Sino-Nepal scholarship for a five-year undergraduate study program in the 90s, he had to pledge that after graduation, he would return and serve the country. He was one of the fifteen-plus students who won the full scholarship for China that was coveted by many. In the last study year, impressed by his study records, the university went on to offer him a further two years’ full scholarship for Master’s degree, if he so wished. But by that time, he had changed his mind. As soon as he returned to Nepal, he applied for a Master’s program in the US.

In the same year, Mr Thapaliya, son of an educated government official, however, preferred to apply for the Indo-Nepal scholarship program popular in that period. Upon graduation, he returned to Nepal and served the government for a few years. Then he went to the US to pursue further studies.

Both Mr Bhattarai and Mr Thapaliya are now fully settled in the US. More than two-thirds of those who went to China and India for study that year now live either in the US, Australia or another developed country. After more than 15 years, very few of them hope to return to Nepal in the immediate future.

Until a couple of decades back, the subcontinent was flooded with flower children, commonly known as the hippies, from the West. They went to South America, they came to Asia. From India, they moved to Nepal and then to the east. Europe had recovered from the war and was rapidly industrializing. America had to forget about Vietnam. People, especially, the young perceived a void in the society. The values of the West were not enough to satisfy them. A rebelling spirit against this gave birth to the hippie movement.

The flower children moved in search of something more grounding, something their souls could feast on. They came in search of liberty, spirituality and alternative lifestyle. In due course of time, they may have found a little of all, but it went on to take the guise of drugs, music and free love. In these, they found both god and freedom. Slowly their dreams ended up in smoke.

Very few who have come with these masses have lingered on. Take, for instance, Mr Kretschmer. A psychologist from Hamburg, who has been living in the Indian subcontinent with his wife for the last 30 years. Not too different is the case of Mr Forbes from the US. At present he lives with his family in Nepal. Both Mr Kretschmer and Mr Forbes are busy in cultural and religious researches. It is definitely not the material poverty nor the hard life that Asia offers that keeps them here.

Meanwhile, the problems in the West have not changed. Rather they have multiplied. Life has grown too fast, too consumerist. Life, society and its values have failed to keep people grounded. So they still come to this part of the world for at least a break, if not to stay for good. For many of these backpackers, trekkers and visitors, Shangri-La, the mystical abode, still remains one of the most sought-after destinations.

Right now in Nepal along with most Asian and African states, exactly the opposite exodus is taking place. This time it is from poor countries to affluent countries. This time the reasons behind are not spiritual quest and liberty. It is the need to leave behind poverty, mismanagement, war and oppression in their native countries and seek good opportunities, good life and social freedom in the West. For this many are ready to give up everything and risk even their lives. But does a paradise await them once they land there?

The West boasts of a society where the basic necessities of man are well taken care of. Most of the higher ones are easy to fulfill if one has the money for it. For those who want to make money, there are ample chances for it, provided one has the skill and the enthusiasm to work hard. In most Asian and African countries, the recipe of skill and enthusiasm is not sufficient to keep one’s stomach full. So the medium class who has both is more than eager to cross the seas and reach the greener shores.

In the course of my travels, I have found that many citizens of these developed countries are not very comfortable to remain there. A lot of them would love to leave, but they have become so ingrained in the machinery that it is almost impossible to do so. Alfredo, an engineer from Italy, would like to go and live in Cuba. Pablo, an artist from Spain would like to go to a village in the Indian mountains and start a cheese factory. A few like Antonio, also from Italy, have dared to sell everything and start a fishing company in Brazil. But for many like these, to be able to dream is consoling enough.

The situation is worse for the Nepalis and other aliens who are staying in the US, Europe or Australia. They are in double trouble. Most of them are stuck or feel stuck. They would desperately like to leave: They know that in spite of your achievements, you are, after all, an alien. Besides, love for home lingers in their heart. But on the other hand, due to many factors, they cannot just leave. The prominent one is the risk of leaving a secure position to start a new adventure back home.

However, the biggest wish that many cherish is to be able to return to their home country one day. Sadly, for most of them like the Bhattarai and the Thapaliya families, that just remains a wish. Not to talk about returning home for good, in the last ten years they haven’t even been able to visit their families in Nepal once. On the other hand, the Kretschmers and the Forbes are all happy and content to live in Asia. Although the Kretschmers lead a frugal life that very few would envy, and the Forbes live comfortably enough, both hope to try their level best to remain in the subcontinent, most preferably in Nepal.

Leaving our homeland should not be the final aim, nor should landing on the other shore be the ultimate solace. Shall we explore all these before we leave? Let’s plan well so that we can return and live here; so that we can contribute a part of what we have achieved. There is always some way in which we can contribute. It all depends upon our will to do so and our sense of duty. When we take this duty, we shall discover that our personal fulfillment is right here. Perhaps not right now, but surely at some point of our lives.

The author, an engineer by training in Europe, dedicates much of his time as an academic faculty and professional mentor

KATHMANDU, Nov 5: Nepal is taking on Timor Leste at the group stage match of the AFC Solidarity Cup at... Read More...